Martin Luther King ON stage. 50 years after « I have a dream » in a very unique performance. The Premiere is taking place at UNESCO HQs 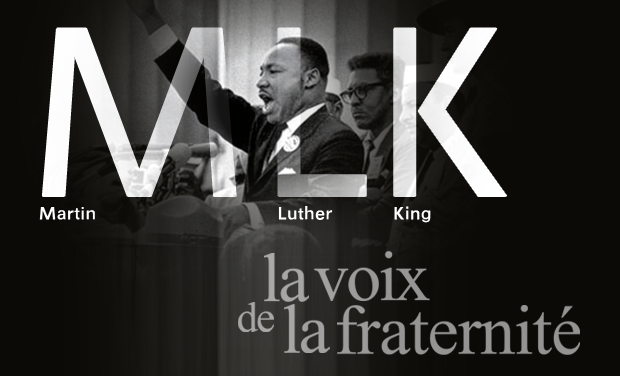 Artists have been recruited according to their professional talents, their human quality and their commitment to the Martin Luther King’s message and philosophy.

The struggle for freedom and equality led by Martin Luther King is at  the core of the project. He committed with success and without any violence against a system that used to set  aside a great part of the population because of racial judgement.

Dr. King’s message entails a universal dimension since he focussed on human dimension, as much as his spiritual father Gandhi did in his own struggle. Precisely because this message goes far beyond the American boarders the French organization Le Cercle des Artistes and the artistic director Abdel Soufi made this choice of paying a tribute to the man that deeply contribute to world history fifty years ago with the most world-known public speech “I have a dream”

Please watch here the TEASER (if not working above)

MUSIC : More than 10 original Gospel songs will be performed

MOVIE : Extracts from the historic signature as part of the décor

DANCE : A very smooth support will be carried out by our choregraph Gerladine Amstrong (see below "TEAM")

THEATER: extracts from the original public speeches will be played in French

To see elements of settings and scenery, please see French version of the Kisskissbankbank campaign.

By a technical mechanism both mirors and pieces of tulles will be moved in order to create an athmosphere of dream and also in order to bring the spectators on stage and make them become actor of this historic moment. This will underline the atemporal dimension of Dr. King's message.

A performance at the headquarters of Peace, Culture and Education

The Premiere will take place at Unesco Headquarters which highlights this universal dimension.

The show is not only a reunion of artists giving their best talents to perform all together. It is also a great project that gathers citizens and brings citizens of tomorrow closer to MLK’s message.

Therefore young people who come from less privileged areas will be invited to attend the Premiere at Unesco so that they can hear as well this message of hope and peace. It is important to us to facilitate the access of this show since this is a population who is very often far away from the Parisian cultural events. It can be because of direct economic reasons (not enough money to pay an entrance fee) or because of indirect economic reasons (information about such events does not reach everyone because of limited access to the means of information or because of difficulties to get them).

Also there will be workshops with these children before the show with teachers and the musical director in order to bring them closer to Gospel spirit and to prepare them mentally for  this wonderful experience at Unesco.

If it is widely recognized that culture is made by everyone since it is deeply anchored in the human being  and  it is  shaped by human experiences, but places of cultural performance still remain often too far away from a great part of the population.

Culture is made by everyone and should be performed for everyone – that’s our belief.

This is with this spirit that Unesco gave its authorization to welcome the Premiere.

Isn’t it the best symbol possible for such a representation to be welcome at the headquarters of an institution which promote Culture, Education and Peace at an international level?

Gerladine Amstrong, choreograph : she was born in the archipelago of Grenade, studied in London withMatt Mattox, before creating her own company jazz art. She met many famous French artists (Line Renaud, Dalida, Shela) and decided to create the company Armstrong Jazz Ballet. 2009, for the Black Project, she worked with Rick Odums and National Dance Center.

Bassey Ebong, choir director: today he is musical director for the City of Paris. With Nigerian background Bassey found his inspiration for Gospel very early. He started his career as choir director in 1997 with a group of 35 singers. He was a tenor in the famous Opera Porgy and Bess in Lyon. Since 2008 Bassey has been directing “Hope Gospel Singers, “Maison pour Tous” and worked for Coline Serreau’s choir.

Jean-Claude Bonnifait, actor : Jean-Claude joined Francis Huster’s class at the “Cours Florent” – many very famous French actors were educated there and it is seen as one of the high-level education system for actors and actresses. He then began a wonderful career playing a very large repertoire. Also he has been seen many times on TV and cinema.

There will be also three musicians, seven singers and seven dancers. Also a very special choir of 20 singers will join the experience at Unesco.

Our artists come from mainland France, overseas French departments and territories, as well as from Western Africa.

They all gather for ONE voice, a voice coming from the United-States fifty years ago, a voice that highlight a UNIVERSAL message delivered by DR. KING, a message of SOLIDARITY, BROTHERHOOD and SISTERHOOD.

BEFORE YOUR SUPPORT : What has been done so far? Who are our already-convinced supports?

Our most symbolic moral support comes from Martin Luther King's organization for civil rights, the SCLC.

Regarding website, artistic booklets, translation, rehearsals, musical writings, first administrative tasks, everything has been achieved so far through the deep commitment of our volunteering team. The team has been committed through a great inspiration of MLK's discourse and feel proud to be part of this adventure and to contribute in bringing on stage MLK's memory.

We also managed to move forward thanks to a public financial support of the  Fond de Solidarité et Professionalisation (FSP) (founded by Ministry of Economy and Ministry of Culture). Also the very active Parisian cultural center Cent Quatre helped us in offering a room so that we have been able to present some extracts and to be allowed to perform for the Premiere at Unesco Headquarters ( capacity of 1300 people). Unesco also gave us its label "Road for Slavery" which highlights the links with African American history and the project.

The American Embassy, the French Committee for Memory and History of Slavery, as well as the French Gospel Federation publicly wrote their support to this project.

Why do we crowdfund?

Our wish is to gather citizens towards a committed, vibrating, ambitious project which is also above all a project of humanity, by humans and for humans.

To be together means an opportunity to contribute as much as possible in building this dream which was formulated fifty years ago by the Peace Nobel Price owner 1964.

To be together proves that there is a citizen dimension of this project in order also to better convince our future partners.

1) WITH YOU : We'll be able to finance the settings made mainly out of

This scenery will highlight the dream-like dimension of MLK's dream as well as his message for non-violence and for dialogue between citizens, whatever their origin, their religion, their skin color or their gender.

2) WITH YOU : We'll be able to cover the transport and printing fees for the organization of music workshops with the children who are coming to the Premiere. These costs cannot be covered by our volunteers.

2) WITH YOU : We'll be able to start our DVD, which is an important communication support in order to distribute the show in many theatres in Paris and France.

The other very important element of artistic creation entails the outfit.

We are in contact with a great African designer who was educated in France for design haute-couture. He is a very much committed artists and consider fashion as a mean to fight against prejudice and stereotypes about Africa throughout the world. We are very grateful for his commitment for working hours but we need to buy the materials and the transport.

By the end of the project, we'll organize a charity sales and the benefits will be sent to an organization dedicated to a better access to culture for young people from unprivileged areas.