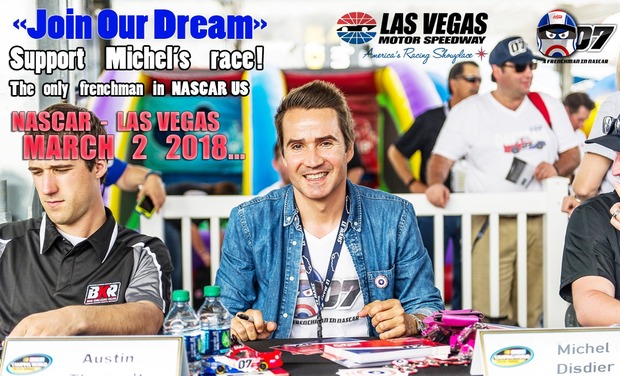 Michel Disdier is not only the only French driver, but also the only European endorsed by NASCAR

FIRST FRENCHMAN IN NASCAR SINCE THE 1970’S

In 2013, Michel became the only French driver to set the best time during the last practice session before a NASCAR sanctioned race. It was the first time he had been allowed to take part. He finished this first race in 11th place (out of 43 drivers), 35 years after the last French entry in NASCAR at the Daytona International Speedway.

Michel proved his ability to race in this discipline in which only two foreign drivers currently take part (a Mexican and Michel). Consequently he obtained the coveted licence allowing him to race on all types of oval tracks: Short Track, Speedway and Super Speedway.

Now our aim is to attract as many sponsors as possible, so that we have means to fund a complete race season, and we need your collaboration to achieve this.

WHAT IS OUR OBJECTIVE?

Photo: Every year, the President of the United States, here Barack Obama, welcomes the best NASCAR drivers to the White House.

Currently Michel Disdier is the only Frenchman who has obtained the NASCAR licence to compete on all oval tracks in the USA.

Since 2007 a passionate group of enthusiasts have supported him in his venture. The last Frenchman to take part in a NASCAR race was Claude Ballot Lena in 1979.

TODAY, NASCAR IS THE TOP MOTORSPORT IN THE USA AND IS SECOND ONLY TO THE NATIONAL FOOTBALL LEAGUE AMONG PROFESSIONAL SPORTS FRANCHISES IN TERMS OF TELEVISION RATINGS, AHEAD OF BASKETBALL AND BASEBALL!

- Broadcasted in 150 countries and translated into 20 different languages.

- Second most popular sport in the USA (after the NFL).

- NASCAR fans buy three times more merchandising than in any other sport!

- All the races are broadcasted LIVE on FOX SPORTS, SPEED CHANNEL and ESPN with an average of between 3.5 million and 5 million viewers in the USA.

- 10 months of marketing opportunities in a season that starts in February and ends in November!

- A fantastic opportunity for brand exposure at international and local levels.

- An unrivalled close relationship with the fans.

We are addressing you today to ask for your support. We would like to attract sponsors that would give Michel Disdier the funds necessary to enter the entire season opener at the Daytona International Speedway in February. And ideally, we would like to attract enough funding to see Michel compete in the whole season, which would allow him to show his talent and which would give our commercial partners maximum exposure in all the media linked to the sport.

‘Working with Michel was a great experience as not many drivers have the passion and determination Michel has for racing. I look for him to be a contender for a win when he gets more opportunities to race the trucks.’

Steadily and with a steely determination, Michel Disdier has established himself in the world of NASCAR. After having gained experience on ovals, the Frenchman showed his mettle when he took part in various races in the Canadian Tires series, ARCA series and NASCAR Camping World Truck series. He now dreams of becoming the first French driver to succeed in one of the three NASCAR national series.

Being the first Frenchman in NASCAR since 1979 is an ambitious dream. But it could become a reality for a man who managed to gain the support of the fans and the respect of teams and managers through his performances, and who wants to put the experience gained at Daytona in NASCAR Truck Series to good use. Hopefully, he can use this experience to climb to the top.

Christophe Bourgeois is a media, marketing and communication specialist.

In 2010 he set up his communication and media content production agency and met Michel Disdier, a driver determined to live his American dream.

He spent some time studying the sport and realized what wonderful potential there was in it. Not only from a human point of view, but also what a gold mine it could be for French and European brands. This led to the creation of Lafayette Racing, in collaboration with Michel Disdier.