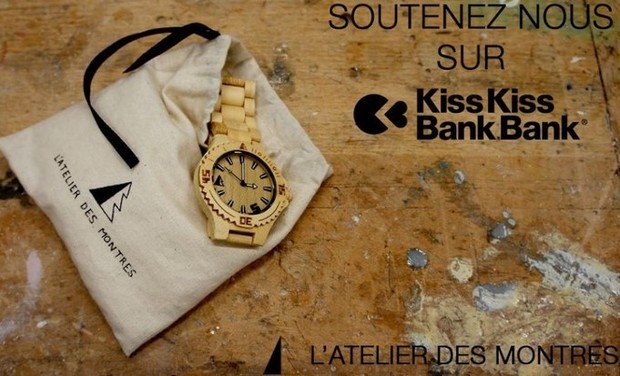 It was by chance, surfing the internet that I discovered the existence of a wooden watch made ​​by an Ukrainian  craftsman Valeri Danevitch. Then I decided to develop this idea in order to produce wooden watches for everyone. After an assessment of the competition, I realized that the concept was already marketed in the U.S. by an Italian company, but the European market seems to set aside. Thus an opportunity was born from an idea ...

The market was targeted, it only remained to produce the watches!

Thanks to my engineering studies, I had all the knowledge and skills necessary to design watches.

Once the watches were designed, I had to find a supplier able to produce them. It was so far the most difficult step of the project. I wanted to base the production in France, I had solicited for almost six months over one hundred local suppliers without success. After this first failure, overtaken by economic realities, two options were available to me, the first and easiest would have been to abandon the project, or to expand the range of research.

The choice was not easy but I was so motivated by this project that I could not give up. So I selected an Asian company to machine the wooden pieces and the first samples have been assembled and tested by myself.

Our two first models, made out of bamboo :

The watch movement is Japanese (Hattori, Seiko). The strap and case are machined in China and assembled by myself.

How are the watches sold :

Thereafter the first watches were produced I had to implement a distribution system. The E-shop seemed like the perfect solution, for several reasons: it is simple, it is low not too expanse to set up and it gives you an acces to a vast market that can touch (40 million people in France).

Today the project is launched and the first sales have been made !

However until now, L'Atelier Des Montres had been fully funded by my own savings. It takes between 3,000 and 5,000 euros to develop a new model (100 pieces), so at the moment I am not able to develop or produce enough models to meet the demand.

That is why today I would need 10,000 euros to scale up this project, as it deserves it .

Funds will be allocated in this way:

-6000 Euros for the development of new models

-2000 Euros for the purchase of  more efficient tools in order to optimize the assembly process.

-2000 Euros for the purchase of raw materials to produce larger series (200 pieces).

Our new models with leather strap made out of maple (left) and sandalwood (right) :

Thanks to KissKissBankBank and your support, I hope to give a real momentum to this project!

THANK YOU FOR YOUR SUPPORT!