From a 20th-century counterstory's perpective: the roots of a peaceful future. Support the exhibition that unveils them. 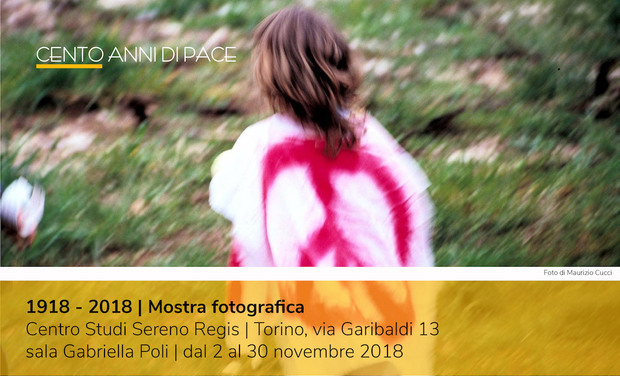 The XX century has seen the devastating violence of world wars and mass genocides; but it has as well seen the evolution of nonviolence as a political doctrine, which translated into new forms of struggle and emancipation. Aware of these changes and willing to explore and portray them, the Centro Studi Sereno  Regis has promoted research and collection of the historical memory of peace-building and development of forms of nonviolent struggle and resistance, aiming to realize a photographic exhibition suitable for international distribution.

This research will be a chance to present to civil society a historical narrative that has been little discussed so far. The exhibition – consisting of photographs, posters and documents –will help people become aware of the positive power they are endowed with, by means of which we can overcome the feeling of helplessness that negative events may arouse in us.

It is in fact important, for those who want to give their civil and political contribution to the society, to be able to see in history not only the bloodshed and pain caused by wars and genocides, but also patterns of a different paradigm for thinking and acting. Such a paradigm may in fact transform the very ground structure of our political culture and direct it towards peace. Presenting positive peace processes and experiences can certainly foster further development of peace itself.

First section – No war: beyond the concept of enemy

·         Peace inside war, resistance against war, civil resistance. This part will focus of World War I and World War II: origins of the resistance movements in XX century; civil resistance during nazism and fascism; recent examples of “spared blood” in extreme violent situations (the Truth and Reconciliation Commission in South Africa, the Rwanda case, nonviolent resistance in Palestine, minorities protection cases during recent wars).

·         Nonviolent resistance against colonialism. From Gandhi to decolonization movements in Africa, Asia, America and Australia.

·         Resistance against violence towards socio-eco-systems: campaigns against nuclear plants, against industrial pollution, movements to stop big dams and land-grabbing.

·         From Ecocide to empathy and inclusion: initiatives and laws for animal rights; development of eco-feminism; defense of indigenous people and their territories; acknowledgment of Mother Earth rights; protection of climatic stability.

About us
We are a no profit, indipendent, volunteering organisation born in 1982. Our mission is to spread the culture of peace and nonviolence. This means to us face all the aspects of  violence: direct, cultural and structural and organize our efforts around 3 pillars: research (to demonstrate that nonviolence can be possible and it is not an utopia), education (to increase the number of people that know what does it means nonviolence applied to human society) and finally nonviolent action (because nonviolence is effective if it becomes a bottom-up programme of changing society).

Your contribution will be used to cover part of the costs we are facing. Below you can find the complete budget:
Exhibition: exhibit setting up, graphic design, exhibition stands, printing and reproduction of exhibition materials € 40,000
Production of original videos with archive footage: production, direction and editing € 25,000
Implementation of educational activities for schools: training courses, guided tours € 4,000
Production and realization of theatrical animations for schools within the exhibition € 5000
Communication € 3.000
Our goal is to raise up to € 20,000 through this crowdfunding, for the expenses not yet incurred. If we reach this goal, the exhibition will be free!