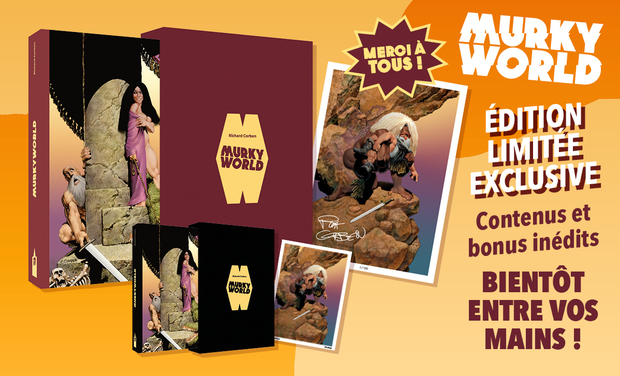 MURKY WORLD is RICHARD CORBEN's latest fantasy creation. Currently serialized in the pages of cult magazine HEAVY METAL, we offer French readers the complete story in what will be a world premiere!

Our objective is to make a classy limited edition featuring exclusive contents and creations by Richard CORBEN, in what would be a unique item for international collectors.

In a world where reality and fantasy are barely distinct, Tugat, a brave warrior but a simple man, is drawn into a strange and murky quest... But wherever it will lead him, he will  keep on looking for the woman whose love he seeks. Through the traps laid on his path, the treachery and deceptions, he will rely on the help provided by his former master's guiding principles and the watchful eye of an agent of fate... with her own motivations!

We wish to offer ALL subscribers the possibility to acquire a beautiful large format (22x30cm) hardcover edition with a clothed spine printed in classy coated paper, and encased in a protective clothed thick rigid box with silkscreen graphics.

This edition will also feature the following exclusive contents:

- goodies: sets of postcards and bookplates,

- additional contents, with the original B&W 24 pages story, as it was published in 2012 by Dark Horse Comics, and never reprinted since.

- roughs and sketches, reproduced with the authorization of Richard CORBEN!

- exclusive creations: appreciative of the limited collector boxed edition of Shadows on the Grave we published in 2018, Richard CORBEN has accepted to get even more involved in this project and will create an original artplate, of which he will sign copies (125 copies for sale here) and an original cover!

The signed copies of the artplate will be printed in ultra-high quality using the digigraphy process (the must of silkscreen printing, with pure color pigments and printing on 100% cotton paper) and will be offered with the digigraphy print certificate.

These graphic elements are currently being worked on by Richard CORBEN, and we will show you more about them as we receive further visuals.

With all these extra features and contents never to be reprinted again in the future, this limited edition of MURKY WORLD will be a unique piece exclusively available to the subscribers of this campaign!

His huge career spans over almost fifty years of independant comics creation. He has graced the pages of many fanzines or magazines (such as the cult CREEPY, EERIE, VAMPIRELLA magazines published by Warren Publishing, or HEAVY METAL). Among his most famous classic personal works are ROWLF, the saga of DEN, the NEW TALES OF THE ARABIAN NIGHTS, or MUTANT WORLD...

He also has produced several stories for Marvel or DC comics or famous characters such as Hellboy for Dark Horse Comics. But as a true independant artist, his main drive has been to create his own stories, while constantly developing his own storytelling and art techniques.

As such, his carrer has never taken an easy path, but it has led to his unique style being followed faithfully by fans across the world and through the years.

His latest works have been published in France by DELIRIUM since 2013. Following the rediscovery of his production in France, and always at the peak of his art (as displayed in RAGEMOOR, SPIRITS OF THE DEAD, RATGOD or SHADOWS ON THE GRAVE), he has been re-acknowedged by his peers here, who have awarded him the prestigious Grand Prize of the Angoulême Festival in 2018.

The aim of this campaign is to support a new and ambitious editorial project, impossible to achieve for a small independant publisher for the classic retail market.

As we did for GRAVE, Les Contes du Cimetière (the Shadows on the Grave French limited boxed edition) we wish to make a beautifully crafted edition, with high quality material and a classy design (see description above), as well as rich with bonus and exclusive contents.

In these very peculiar and trying times, our objective is also to make sure Richard CORBEN is involved in every stage of the success of this campaign, along with DELIRIUM, so we can all see it through safely.

All Richard's creations are commissioned, of course, and we have offered him to have an interest in all books printed and sold during this campaign. His trust is a true reward and we wish to return him all the support we can for all the visions he has been sharing with us for so many years, through the ups-and-downs of the life and career of an independant artist, which we both have enjoyed as readers and publishers.

Each stretch goal reached enables us to improve the quality of the edition, to add extra contents, to reward a little more the author and team working on this project or increase the print run.

The exclusive limited edition of MURKY WORLD, in its final unlocked version with all bonus contents, the complete unlocked set of postcards and bookmarks, and the exclusive Artplate created by Richard CORBEN signed and numbered! This version of the artplate will be printed using digigraphy techniques (high quality silkscreen printing) and will be delivered with its quality print certificate.

The whole Delirium team thanks you for your support !

For a pledge of 15€ or more you will get the complete set of postcards and bookmarks as unlocked at the end of the campaign! Shipping costs included

Intégrale MONDE MUTANT The French collected edition of MUTANT WORLD and SON OF MUTANT WORLD, the classic stories drawn by CORBEN and written by long-time friend and partner in fantasy, Jan STRNAD! Published in 2019, in official competition at the 2020 Angoulême Festival.

EERIE & CREEPY Présentent RICHARD CORBEN Volume 1 The first book of the complete Creepy & Eerie works. Featuring many new scans from the original artpages! French edition initially printed in 2013 and reprinted in 2018, these are the final copies available.

ESPRITS DES MORTS The French edition of SPIRITS OF THE DEAD, collecting all Corben's recent adaptations of E.A. POES stories. Considered by the artist as featuring some of his most beautiful works. Originally published in 2015, reprinted in 2018, in official competition at the 2020 Angoulême Festival.

The exclusive limited edition of MURKY WORLD, in its final unlocked version with all bonus contents, the complete unlocked set of postcards and bookmarks, and the exclusive Artplate created by Richard CORBEN!

MURKY WORLD + RAGEMOOR The exclusive limited edition of MURKY WORLD, in its final unlocked version with all bonus contents and the exclusive Artplate + RAGEMOOR, the classic Gothic horror story in beautiful greytones, written by Jan STRNAD. French edition originally published in 2013, reprinted in 2018.

MURKY WORLD + RATGOD The exclusive limited edition of MURKY WORLD, in its final unlocked version with all bonus contents and the exclusive Artplate + RATGOD, the horror/fantasy masterpiece, in reference to H.P. LOVECRAFT's works. French edition originally published in 2016, reprinted in 2018, in official competition at the 2017 Angoulême Festival.

MURKY WORLD + GRAVE, Les Contes du Cimetière / DENAEUS The exclusive limited edition of MURKY WORLD, in its final unlocked version with all bonus contents and the exclusive Artplate + GRAVE / DENAEUS. This flip book features the complete collection of the stories published in the Shadows on the Grave comic-books, created in reference to the classic EC Comics. On the reverse side of the book is the complete DENAEUS fantasy saga. French edition originally published in 2018.

For booksellers only! 5 copies of the exclusive limited edition of MURKY WORLD, in its final unlocked version with all bonus contents, the complete unlocked set of postcards and bookmarks, and the exclusive Artplate created by Richard CORBEN! (30% discount). Outside European Union: contact us for for availability and additional shipment fees.

The exclusive limited edition of MURKY WORLD, in its final unlocked version with all bonus contents, the complete unlocked set of postcards and bookmarks, and the exclusive Artplate created by Richard CORBEN!

GRAVE, LES CONTES DU CIMETIERE, Box Set, Limited numbered edition The last copies of the limited edition of the French edition of Shadows on the Grave / Denaeus, originally published in 2018. This collector edition which delighted Richard CORBEN, is a "vintage" type edition on high quality offset paper conceived as a bound collection of magazines, protected in a classy rigid glossy box set. It also features an extra CREEPY magazine, with additional stories, and a Bruce JONES tribute text to Richard CORBEN. Offered with a complete set of 10 postcards and bookmarks.