Help us produce our second album with beautiful works by A. Schoenberg, A. Webern and J.B. Borowski 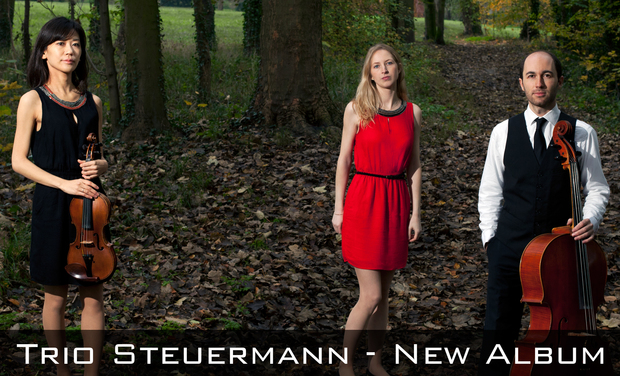 Released by the Hortus Label in May, 2012, its first recording entitled “A Long Voyage” presents piano and chamber music works by the French-Swiss composer Pierre Wissmer. Trio Steuermann has recently performed at the Palais Brongniart during Musicora 2012, ArtenetrA Festival, Musicancy Festival, Lake District Summer Music International Festival (UK), Théâtre Paris-Villette and “Musik 21” Festival in Hanover and Wolfenbüttel. In 2013, Trio Steuermann presented the world-premiere of the "Klaviertrio" written by the young German composer Johannes Boris Borowski at the Maison Heinrich Heine in Paris.

It will be released by the Hortus Label in the autumn 2015.

During the summer of 1899, Arnold Schoenberg stayed with his mentor Alexander von Zemlinsky in Payerbach, Austria. On this occasion he fell in love with the latter’s sister Mathilde (who became his first wife in 1901). Within three weeks Schoenberg had composed a string sextet in one movement subtitled Verklärte Nacht (Transfigured Night). The final version of the manuscript dated "December, 1899" is based on the poem "Verklärte Nacht" from the anthology Weib und Welt (Woman and World, 1896) of the German writer Richard Dehmel.

The moon races along with them, they look into it.

The moon races over tall oaks,

No cloud obscures the light from the sky,

Into which the black points of the boughs reach.

This poem evokes a nocturnal walk in the forest wherein a woman confesses to her lover that she is carrying the child of another man. Far from pushing her away and out of love, he expresses his desire to accept the child as his own. Zemlinsky considered Verkläte Nacht as "the first programmatic chamber music", the five consecutive sections corresponding to the five parts of the poem. Several previous compositions that remained fragmentary–Hans im Glück ou Frühlingstod–reveal the profound interest Schoenberg had been developing in the programmatic music genre. The work is in d minor, the same tonality he will adopt in Pelléas and Mélisande, Op. 5 (1902-1903) and First Quartet, Op. 7 (1904-1905). The predominance of contrapuntal writing culminates in a polyphonic complexity in its blending of continuous harmonic transformations of thematic elements.

During his entire life, Schoenberg remained a fervent defender of Johannes Brahms, notably extolling his modernity in his famous article "Brahms the Progressive". Verklärte Nacht is an eloquent testimony of the latter’s influence. The impact of Richard Wagner is likewise significant, especially that of Tristan, in his sustained use of a tonal chromatic harmony. Schoenberg himself assessed the role of the two composers in these terms: “My Transfigured Night brings forward Wagner in its thematic treatment of a cell developed on a continuously changing harmony, but also Brahms in its developing variation principle.” This tonal mobility that prefigures Chamber Symphony, Op 9 set off vigorous protests during its premiere on March 18, 1902 performed by the Rosé Quartet, the viola player Franz Jelinek, and the cellist Franz Schmidt in the Kleines Musikvereinssaal in Vienna. In 1917, Schoenberg adapted Verklärte Nacht for string orchestra, subsequently revised in 1943; Eduard Steuermann, Polish pianist and student of the composer, took the initiative of transcribing the work for trio with piano in 1932, and Margun Music (Newton, MA) published this version in 1979.

Promotion concert of your first album "A Long Voyage"-dedicated to the composer Pierre Wissmer- at the Palais Brongniart in Paris during Musicora:

Pierre Wissmer forged a style distinguished by graceful purpose and force of character, much like the monarch butterflies that illustrate this album. Spanning a thirty-five year period, his piano and chamber music works offer you the discovery of heretofore unknown musical spheres. Initially showing diverse influences, with time his composi- tional style developed into a completely unique and personal sound universe.

Throughout his life Pierre Wissmer’s trips between two homelands – France and Switzerland – nourished his musical imagination. In this wood engraving entitled ‘Long Voyage’ (2001), the American artist Jean Lodge captures the swirling movement of the butterflies enhan- ced by the natural vein of the wood, calling to mind their annual migration to a wintering site in Mexico four thousand kilometers from North America.

As Wissmer said: One must compose with ‘the intuition of a water diviner’ and know how to find a state of equili- brium when the long voyage has come to an end. Such is the case of the millions of butterflies which, from one generation to another, succeed in alighting on the same tree in the forest of Michoacán.

This fundraising will help us finance:

If the fundraising exceeds the targeted amount, we will have the opportunity to organize a promotion concert for the "Transfigured Night" album.

Your name as a "donor" on the Trio's website