Contribute to the release of "Bass Tales" the upcoming album of the Nicola Sabato trio. 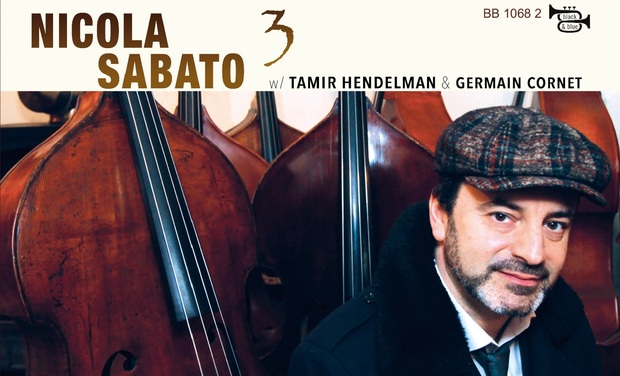 « Often, you can hear the personality of the musician come through his/her music. The light hearted fills of Basie, the take-command nature of Oscar Peterson and countless other examples. Nico Sabato's personality is clearly heard when he plays. I hear the big, fun loving presence, I hear the leadership qualities and I hear his desire to always be a team player.

This album SWINGS in the styles of our bass forefathers (especially Ray Brown, of course!), yet Nico's sound and personality are clear and distinct. He "velcroes" himself to the piano and drums and the music is allowed to soar as a result. Plus, I love the concept of the album--but who doesn't? BASS, baby!

The double-bass is an under-appreciated instrument. The soloists get the acclaim while the bass remains in the shadows. According to unfair rumours (undoubtedly spread by jealous guitar players), bass solos are so boring that they have the power to reunite couples who didn’t speak to each other and get them to engage in conversation again.

Fortunately, there have been many rebuttals and Nicola Sabato is bringing new evidence of what the legendary Ray Brown once told me in his assertive tone— ‘It’s not about the instrument you play. If you’re a leader, you’re a leader.’ One does not always realise how the bassist’s character infuses the whole band sound, creating a unique groove for everyone to play on. Nicola Sabato shows exactly that with confident authority, in his aggressive soloing or the thrust of his radically swinging comping.

With this new project, Nicola Sabato shows the extent of his talent as an arranger and moderniser, making his own the grooves of those who inspired him—Charles Mingus, Christian McBride, Jaco Pastorius, Ron Carter, Paul Chambers, Sam Jones… Using a composition by each of those illustrious bassists, Sabato showcases the stylistic diversity of jazz: swing and Latin beats, ballads and funky shuffles, melancholy classics (« Goodbye Pork Pie Hat »), upbeat contemporary songs (« The Shade of the Cedar Tree »), steaming up-tempos (« Unit 7 »)…

With the leader’s great rhythmic finds, (« What’s New » played with the « Poinciana » groove!), each musician can just be concerned with stretching out.

As for drummer Germain Cornet, he’s got it all down— dynamics, colours and nuances are perfectly executed, whether with sticks or brushes — and brings his own subtle excitement as a drummer should.

This might well be Nicola Sabato’s best project, in any case one that shows his tremendous musical appetite and creativity, displaying his own brand of reinvented classicism. Bass rules!

Jean Szlamowicz is a contributor for Down Beat, a member of the Académie du Jazz in Paris and runs an organisation called Spirit of Jazz.

Nicola Sabato bass, was born on April 23, 1973 to an Italian father and French mother. He grew up in the south of France, and began his musical training at the age of 16. At first, Nicola, focused on the guitar and the electric bass, playing in rythm and blues groups in the Rhône-Alps region. His love affair with jazz started simply: from hearing on the radio the version of “How High the Moon” by Ella Fitzgerald in”Ella in Berlin”.

-It was in Montpellier, 1993, that Nicola Sabato began teaching himself the upright bass by ear, following the models of Ray Brown, Paul Chambers and Sam Jones. For 8 years he played with regional musicians, until 2000, when he was strongly encouraged by Parisian jazzmen to relocate to Paris. It would prove to be a decisive move.

-In 2001 Nicola continued his training with Pierre Boussaguet, who notably imparted the art of making the bass ring. In July of the same year, he met the legendary Ray Brown. A single lesson changed the course of his musical maturity. Equally important was the mentoring of percussionist Jeff Hamilton; whose sessions he sat in on numerous times in both France and Germany. Mr Hamilton as also introduced Nicola to John Clayton, allowing Nicola to study with Mr. Clayton during a sejour in Cologne.

-Nicola Sabato thus became an extraordinary sideman on the Paris scene playing in numerous clubs and festivals throughout Europe and the world.

Today Nicola Sabato is a bass player appreciated throughout Europe, where he has work or still works with people like George Arvanitas, Craig Handy, Larry Fuller, Harry Allen, Florin Niculescu, Mandy Gaines, Tamir Hendelman, Doug Raney, Jesse Davis, Marc Fosset, Marcel Azzola, Jeff Hamilton, Anne Ducros, Ignasi Terazza... Musically rich from his work, in 2003 Nicola Sabato finally decided to create his own trio with Dano Haider (guitar) and Patrick Cabon (Florent Gac today) (piano), anchored in the jazz trio genre. Their first disk:”On A Clear Day”, was released on the DJAZ record label in September 2004. In 2006 he recorded a beautiful album featuring Jeff Hamilton, Ignasi Terrazza and Dano Haider “Lined with a Groove”. Nowadays he is co-leading a very swinging quartet with vibes player Jacques di Costanzo that pays a tribute to the greats Ray Brown and Milt Jackson. The group recorded “Live in Capbreton” in 2016 on Absilone label.More recently Nicola Sabato teams up with the great pianist Tamir Hendelman and had just recorded an album called “Bass Tales” for lengendary French label Black and Blue. The recording, which regroups some of the best bass player’s compositions in the history of jazz is now being released.

- Nicola Sabato has forged his styles by listening to the masters (Ray Brown, Paul Chambers, Israel Crosby, Sam Jones, Oscar Petitford and Ron Carter), and combining this with his musical and personal experiences. Known by his peers for his subtle style, and appreciated by his audiences for the joy with which he plays, Nicola Sabato is a complete musician equally at ease in the roles of sideman and leader.

Beginning his keyboard studies at age 6 in Tel Aviv, Tamir moved to the US at age 12 in 1984, winning Yamaha's national keyboard competition 2 years later at age 14. Concerts in Japan and the Kennedy Center followed.

Tamir then studied at the Tanglewood Institute in 1988 and received a Bachelor of Music Composition degree from Eastman School of Music in 1993. He then became the youngest musical director for Lovewell Institute, a national arts education non-profit organization.

Since returning to LA in 1996, Tamir has been in steady demand as pianist and arranger, touring the US, Europe and Asia, and receiving awards from ASCAP and National Foundation For Advancement in the Arts. In 1999 Tamir was a guest soloist with the Henry Mancini Institute Orchestra.

Tamir joined the Jeff Hamilton Trio in 2000, contributing arrangements, recording and touring Japan, Europe and the US. In 2001 he became a member of the Clayton-Hamilton Jazz Orchestra, with whom he premiered John Clayton's new orchestration of Oscar Peterson's Canadiana Suite in the Hollywood Bowl in 2001. In 2002 he also toured Europe with Tierney Sutton and the Bill Holman Big Band. Tamir musically directed Julia Migenes' s "Alter Ego" and played/arranged on Roberta Gambarini's "Easy To Love."

With the CHJO, Tamir has recorded for John Pizzarelli, Gladys Knight and Diana Krall. He is the pianist/arranger on Jackie Ryan's "You and the Night and the Music" and Janis Mann's "A Perfect Time." He is also featured on Natalie Cole's "Still Unforgettable" and Barbara Streisand's upcoming recording.

Tamir’s musical travels have taken him from Alaska to New York, and Thailand to Israel. In his own trio, he explores standards, Brazilian music, blues and his Israeli roots. Tamir’s debut CD Playground (2008) was released in Japan on the Swing Bros. label and was released in the U.S. in December 2008 on CDBaby.com. Tamir is a Resonance Records artist.

Born in 1991, Germain Cornet started playing drums at the age of 15 but it was only two years later that he discovered jazz.Influenced by Swing and Be-bop music, he learned drums from Charles Bellonzi and studied at the National Conservatory of Music and Dance in Paris. Accompanying great musicians like Tamir Hendelman, Harry Allen, Nicolas Bearde, Mandy Gaines; he plays regulary in Parisian jazz clubs such as "Le Duc des Lombard", "Sunset-Sunside", "Caveau de la Huchette" ... and in jazz festivals such as "Jazz à Vienne", "Saint-Emilion Jazz Festival "," Sancy Snow Jazz "...

Since summer 2015, he became the disciple of Jeff Hamilton that he met at the "Centrum Jazz Workshop" in Port Townsend (USA).

In 2018, Germain Cornet becomes an artist endorsed by the Japanese drum brand CANOPUS.

4. Tale Of The Fingers (Paul Chambers)

6. The Shade Of The Cedar Tree (Christian McBride)

Recorded at Sextant studio by Alban Sautour on July 16/17 - 2017 on FAZIOLI piano and CANOPUS drums.

The album will be released by the legendary Black and Blue record label.

At the moment the album is being recorded, mixed and masterized . We are missing one very last step for the album to be released and for this we need your help !

We chose crowdfunding to help this project see the light.

So, we are gathering music lovers and musicians together in our creative project. That is the reason why we are partnering with you.

The funds collected will be used to pay for :

If the project is succesfull, I will gain all the money collected and the album will be released for the end of January 2019. All contributors will receive their counterparts in the days preceding the official release !

WHAT WILL HAPPEN IF.... we get more than 5 500,00 euros at the end of this campaign ? Then we will have more means to better promote this music and make it more visible/audible.  If we can’t achieve our goal then everything will be lost and contributors will be reimbursed.

Thank you in advance for your generosity !

Thank you very much for your help, you have all of our gratitude.

10 copies of the album "Bass Tales" perfect for your family, friends or colleagues... on Christmas time!!

The album "Bass Tales" signed by all of the members of the trio + 1 duet concert (piano/double bass) with Nicola Sabato (bs) and a french pianist. (Price does not include piano rent and/or room rent, lodging and travel fees if the concert is not around the Paris area)

50 copies of the album "Bass Tales" perfect for your family, friends or colleagues... on Christmas time!!

The album "Bass Tales" signed by all of the members of the trio + 1 trio concert (piano/double bass/drums) with Nicola Sabato (bs), Germain Cornet (dr) and a french pianist. (Price does not include piano rent and/or room rent, lodging and travel fees if the concert is not around the Paris area)