You love Koran Cinema? Help us to produce a web-series Made in Korea with Korean actors in the cast and real Korean locations. 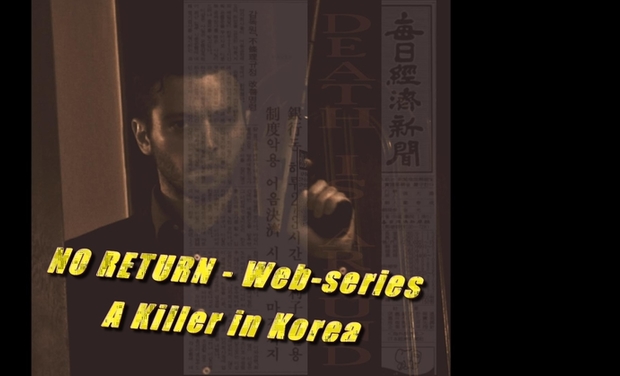 A Killer at the point of no return...

in the epileptic mood of Seoul in Korea.

First episode : A mysterious Killer from Europe arrives in Seoul, South Korea. His mission involves the murder of a powerful Korean gangster and to leave the country soon after. His boss is a mysterious voice on the phone speaking English with a Korean accent. During the gunfight with the gangster in a ethnic bar in the famous Hongdae area downtown East Seoul, everything turns wrong : a lady who was supposed to give him a gun did not do it right and a young boy is seriously wounded by the Killer. He felt something strange about the boy, something related to his own past... The cold professional lets his emotion speaks... He wants to know what happen to the boy. At the hospital, he meets the mother, crying and depressed. The boy is about to stay deaf-and-dumb all his life if he doesn't have a long and expensive treatment. The mother, who lives alone, can't pay. The Killer decides to give her the money he received for killing the gangster and promises to give more money to the mother. In consequence, he can't return to Europe and asks his mysterious boss another mission.

His next mission, will push the Killer to kill a female North-Korean spy...

The Killer is haunted by a tragic past that the audience will discover little by little. It makes him specially sensible behind his professional coldness. He's looking for a kind of redemption,and Asian old wisdom may help him. It's a story about the dawn of a God, a powerful but lost man looking for deep and untold human values. He is surrounded by people - some of them are really special and unpredictable - who seems confident with themselves  and a world with no way out.

A window on Korea :

Each episode, with the story of the killer, makes the audience discover a special Korean area. In the first episode, we are in Hongdae, its famous ethnics underground Bars, its crowded streets and its bridge across the Han River. In the second episode, the subway and the highways crossing Seoul will be the special locations. A temple will be the main location of the third episode, etc.

The Killer is fascinated and puzzled by old Asian wisdom and spirituality.Koreans characters met "by chance" will initiate him little b little through the episodes.

The Killer is haunted by a tragic past that the audience will discover little by little. It makes him specially sensible behind his professional coldness. He's looking for a kind of redemption. It's a story about the dawn of a God, a powerful but lost man looking for deep and untold human values. He is surrounded by people - some of them are really special and unpredictable - who seems confident with themselves  and a world with no way out.

Some of our next shooting locations :

Bridge on the Han River crossing Seoul : The Killer will run after a North-Korean spy...

A Temple : Gangsters will try to ill the Killer after he decides to retire.

Subway in Seoul : The Killer will face is destiny....

Noreabang -Korean Karaoke room : A drinking an singing palace full of dangers for the Killer...

The project of a web-series starts when it was clear that for independent film makers the theatres were not available for short films. Some members like Antoine Coppola, Marco Tessiore, Sebastien Simon had already made several short films but it was so difficult to find an opportunity to screen them. Antoine Coppola has even made Indy feature films and documentaries but it was also difficult to reach an audience- we think like many musicians for example Thom Yorke from Radiohead who is new album is available on internet, he said that internet can contact directly the artists to the people without the "guardians of the temple", it means the distribution companies who controlled everything. So Internet can provide this large audience we need.

We are film makers based in South Korea. many of us have jobs in the medias or the education field. we love Korea and Korean cinema. so naturally we met in many bars of downtown Seoul and in the film festivals all around the country. We have good relationships with the Korean film makers and actors, but they have their own difficulties to make films so as foreigners we are trying to organise ourselves to do the movies we would like to see.

The Korean cinema became international recently. After being a long time under the control of dictators and military regimes, it represents a space of freedom. The situation is very energetic, and we as foreigners are involved in it. The country has many aspects and spaces that haven't been seen in movies, and Korean themselves are not so aware of it. So as foreigners we have a fresh point of view on a country which is quickly changing.

we love genre movies. We can express many things inside a well-known shape of stories and images.(SEE THE VIDEO LINKED BELOW) Our influence come from Tarantino for humour : http://www.youtube.com/watch?v=wZBfmBvvotE

from Seijun Suzuki for passion :

from John Woo for dancing killers:

from Park Chan-wook for madness :

from Kim Jee-woon for style :

HELP AND JOIN US ! WE NED YOU ! WATCH OUR TRAILER !

International film makers based in Korea, we work with 'Syncinema Productions' an independent film production based in France. We already found 25 000 euros to produce the web series, and we would like to complete the budget - 30 000 euros - with the contributions of Korean cinema lovers. People who would like to "be" inside a film made in Korea in a real time (they can be involved in the scenario of te coming episodes) and provide them opportunities in Korea and film.