Another way of considering Europe! Embodying the European Union by meeting its citizens throughout Europe. 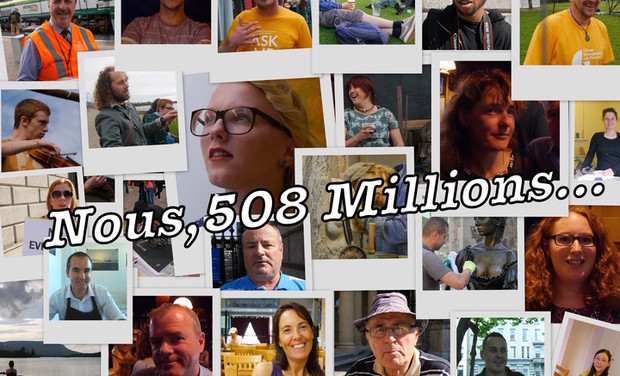 I am fascinated by two realities: the European Union and its 508 million citizens.

The European Union is at first a wonderful idea, nearly an utopia.

For the first and only time in history, states have united willingly in the name of Peace, Liberty and Prosperity. It is the only 'empire' which was constituted not by strength, war or the influence of a country over another one, but in the name of a common 'ideal'.

Misery, bankruptcy, despair... it is against all these things that Europe was built up after 1945. To avoid the horrors that are born from this vitriolic cocktail: totalitarian regimes, war…

If we're not satisfied with what this idea has become, let's change it together.

It's a real strength! It's nearly 200 million more than the US, it's a huge potential... and yet…

508 million citizens living under the same roof, Europe, with the same laws, Brussels, with, for some of them, the same currency.

508 millions people live together... but don't know each other!

If we know approximately the number of countries of which Europe is composed (25? 27? 28?), who is able to give their names? Not to mention placing them... (no, Lithuania is not in southern Europe!).

Who are we? Where are we going? What do we want?

What do we do of these two major assets, a great ideal and a deep strength to embody it?

This project has two ambitions: embodying Europe and questioning our common fate.

I'm asking for your help for the first documentary in a series of documentaries on the faces and the face of Europe.

The documentary will be composed of interviews as well as the portrait of an European citizen that I will follow during one day. The first documentary must provide the leverage to enable me to make the others.

Everybody has something to say about Europe and is happy to make it known.

Now, it's your turn! Take the floor!

I'm inviting you to be fully involved. Not only financially. Indeed, it is a real work in progress which will develop over meetings and suggestions. I would like to associate you to this project.

First, I rely on you to tell me:

1. Which 6 European countries would you like to feature in this first documentary? The 7th will be France.

3. I'm open to all suggestions. Send your opinion on Kisskissbankbank or Facebook!

100 euros = transport costs for a week (inner and outer city)

Translator: the European Union is 23 langages... 200 euros per country

Total for each country: 1250 (except France)

France (no translator, no transport costs) = 900

I have already invested 3500 euros (computer, camera, mic, I need your help!)

Plus charge from Kisskissbankbank =  9650 euros