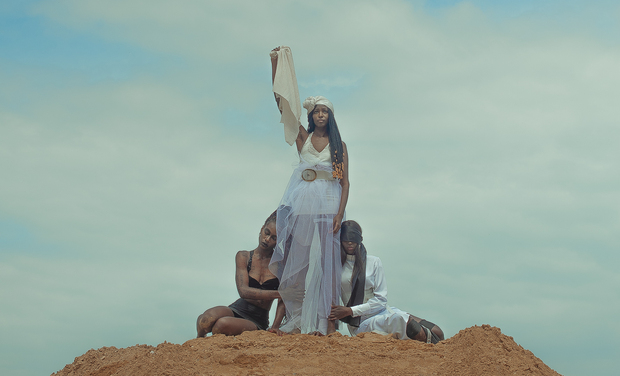 We are aiming to produce a visual serie revolving around african arts. It will be composed of 6 episodes of ranging around 3 to 7 minutes long. This whole serie will be shot in studio and will set forth some cultural heritages of the continent. Through the various episodes that will compose this serie, it is important for us to depict a mosaic of powerful imagery, memories, feelings and emotions...

Nubia, it is the abundance of this multicultural Africa, filled with intricate ramifications and intriguing aestethics. It is a sequence of artwork, frescoes, from distant realities that are so foreign to our minds but with which we are unconsciously flirting with everyday.

Diversity and exchange : keywords to this project.

Hands adorned with ethnical jewels, bodies drowned under tribal paintings, mandingo earthenwares, complex Fulani hairstyles, colorful Amazigh weddings, endemic floral compositions.  All these elements and many more define Nubia because they are a part of what defines Africa, both because of their visual impact and their significance for local communities.

A Visual and auditory experience

Witnessing a new Africa, reconnecting with its lore, our artists will be the carrying voices of Nubia. A poem, a chant, the lyrism of a prose, all these tools will tote the visual representation to a new dimension, exalting through their forms, stories, myths, tales, realities and illusions.

Our intention with Nubia is to touch on various topics.

The quest of self-knowledge, a requirement, a driving energy. It translated within myself under the form of two problematics : identity questioning and the sense of belonging.

I then decided to get some information to answer the many questions that were jostling in my head. Over the course of my researches and introspections, I realized that I was not the only one concerned, and that it was less about "who am i?" than "why am I who I am".

An idea came to me.

What if I could try opening a way to elements of answers for those who, like me, are questioning. But how would I ?

And what if I did it through an artistic performance ? Under the form of a visual miscellany traveling through age and cultures ?

I needed a name, both catchy and meaningful. Then I discovered it, Nubia. This old empire located to the source of the Nile Valley, in current Ethiopia, is recognized for being the ancestor of ancient Egypt, and so, the first civilization known to Men.

I heard it like a whisper under my hear "Nubia"...

The name of the project testifies of a will to interpellate any person with the slightest interest over Africa and more particularly the youth of the diaspora. Through Nubia we want to set forth the wealth of the artistic and cultural history of the continent.

Why film in studio ?

All scenes will be recorded behind closed-doors. This choice allows us to gain plenty time, reduce traveling time for both the team on set and the equipment. The neutrality of the studio will allow us to create a wide variety of scenography on set.

Nubia is a sensorial experience. All aspects of the general atmosphere will have significance for the final production.

All the money gathered will serve its purpose to produce the project, remunerate the technical team etc... Our main expenses will be towards :

The remaining money will help for the rental of the studio, logistic gestion, displacements and stage management.