GMK Korea needs you to help us create a new program of professional formation, and a job for korean orphan girls to get them out of prostitution. 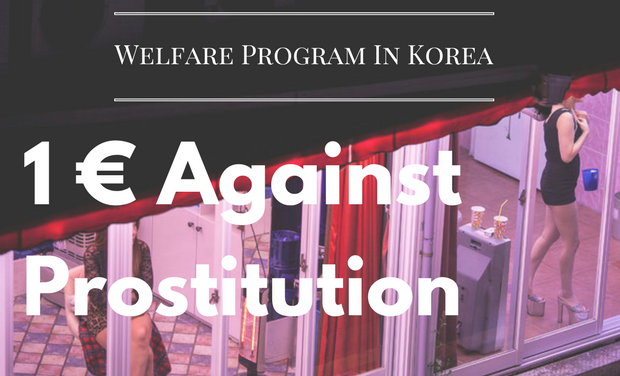 « Sometimes, I regret being born as a girl. Here, if not the orphanage supervisor, it's the older orphans who come to "play" with us every night... Our meals were often based on water and rice flour to look healthy, and have more chances to be adopted.

One day, a big shoes company made a donation to our orphanage. Some employees of this company came to take photos of us wearing proudly our new shoes. At night, we were told to take them off, and to go to sleep. The next morning, everything was gone. Quite a short hapiness.

When I was in a foster family, I thought I had finally found a way out. But no. It often happens that we are sent back to the orphanage, and then find another foster family.  But never for too long.

Surviving as an orphan here when everyone knows you isn't something simple. It becomes complicated for us to find an apartment, or even a job, when we get out of the orphanage. With no parents, no money, not any proper education... We don't have much assets.. So a lot of us prostitute themselves, being often under the lead of old orphans we know, working with the mafia. It's a way for us to make enough money to be able to live. Nobody will save us anyway, because we are no one. »

This testimony is anonymous for security reasons. Thanks to this person for letting us know about her experience.

The future of orphans in South Korea isn't a priority for Koreans.  At 18 years old, they have to get out from their orphanage in order to integrate a society which is still not ready to accept them. Climbing the professional ladder is impossible for them due to the important cost of study.

For most of them, young girls find themselves involved with pimping situations. They often are spotted before they get out from their orphanage. In South Korea, prostitution is common, and represents 4% of its GNP. A taboo in a society where it is nonetheless considered as a professional standard or even a rite of passage to climb the ladder.

The best thing that could happen to her is to find an exhausting work with not enough resources to live decently.

The money we will gather will permit us to recruit those girls, and to form them professionally.

Saving one life would already be a big victory.

We offer a realistic vision of Korea, without forgetting entertainment.

Our realistic social articles might also permitted this company to be the page number 1, being Muslim-friendly in South-East Asian countries.

We offer original information, often restricted for Korean people only. The articles are defined for residents, but also non-residents in Korea, and that’s what shows GMK is a Media of general interest.

Korea is really interested by the South East Asian and Muslim population who want to come here for tourism, study, or to settle down.

The specificity made GMK as a capable Media, a unique one, ready to communicate easily between Korean partners and its followers.

We are gaining 1000 followers by day, and our growth potential is great, as it concerns billions of travellers often underestimated by groups, companies, and Korean Medias.

A Korean mother, fashion lover, who’s behind this project. Growing up abroad, she probably has a critical vision of Korean society.

After her studies at “Beaux-Arts”, she decided to develop cultural projects in South Korea.

A Korean lover of good places where you can hang out in Korea, and an expert in the traditions of the past and present. Before integrating GMK, he was the producer manager for a production company.

French and Armenian, she speaks English, Korean, Armenian, and of course French. After her studies at INALCO, the team wanted to give her a chance.

Japanese, he got graduated from a business school, and he’s an expert in politics and economy…. He’s our analyst of actualities.

We reach some correspondents like Camillia, in different countries, in order to have realistic information. Some of the informations relayed in Korea are exaggerated sometimes.

Funding of the project

GMK is auto financed by its projects. However, we still can’t afford to pay a serious formation of the next orphan girl we want to recruit.

From this amount, we will give 8% to Kisskissbankbank, a total of 240 euros.

The transfer fees to Korea are 140 euros.

We can attribute an instructor for a month, someone of the GMK team.

The minimum wage in Korea is 1100 euros.

The English formation’s cost is for about 40 euros per hour. We’re planning 23 hours of English courses, with a total of 920 euros.

The remaining 600 euros will be used to equip her (computer).

If we obtain more money, we would be able to complete her formation, and give her a salary until she’s effective.

Camillia will recieve all the donations.

The crowdfunding's deadline is 30 days.

We intend to recruit a korean orphan of 18-22 years old for August, and hire her in September.

The korean girl will have a formation on the morning, with two English courses each of 2 hours, per week. She will learn marketing, business, and events.

The afternoon, she will practice what she has learned in the morning with the GMK team.

This formation will last two months, or more if we get more donations. She will be paid with the minimum wage while getting the formation.

The excess of donation will directly go in english courses fees, or more material (software, etc)

We vow in filming a message from the young girl, and you will be able to see her evolution on our Facebook page GMK on Facebook.

You will be able to see her in her new life, following her English courses in live with her.

Although modest, this action is the first step of a realist and innovating educative program.

The evolution of a society is closely linked to the present actors.

This kind of donation crowdfunding doesn’t exist in South Korea. We need you, for a small or big donation.