Tons of plastic wastes are accumulating daily in our rivers. ENOUGH! Join us to improve our blue planet! 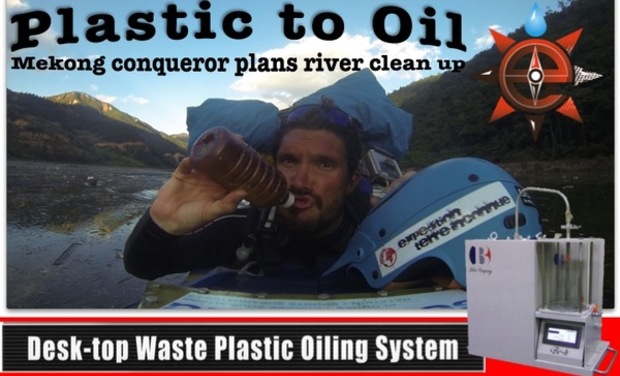 • To protect the Mekong River.

• To improve water quality and the environment.

• To make prevention among the population about the dangers of plastic waste.

• To organise with local people a plastic collect against remuneration.

• To create oil from plastic waste.

The word from Rémi Camus:

Water is the most precious and irreplaceable resource in the life of every human being. Every person has the right to have that resource for living. Our goal is to raise awareness of this problem, which is access to clean water.

This project is not new, it is simply a continuation of the expedition made in Asia.

The need to access drinkable water is well known. Many projects have emerged with varying degrees of success.

Education is the main priority for us that should not be overlooked.

It is very important to explain to the young population mistakes made in the past and what they would face if nothing changes.

Education is the key to success.

Project status: After running across Australia from Melbourne to Darwin, 5400 km in 100 days, he swam down the Mekong River, 4400 km without assistance. Rémi Camus (29 years), french adventurer, fights for a clean Mekong and access to clean water.

How it started: In 2010, Rémi Camus reads the story of the runner-adventurer Jamel Balhi. This reading inspires him his first expedition in Australia, where he ran 5400 km from Melbourne to Darwin, fin the name of a sickness called Lowe syndrome.

This first epic expedition gave him the taste of living in extreme conditions, including lack of water, under the heat of the sun. This experience emerged on him the problem to protect and provide access to safe drinkable water.

Then the new project came up, which was not to be limited to a sporting achievement.

It was also to raise global awareness to the problems related to the preservation of drinking water and access to it. In October 2013, Rémi jumped into the water, on the border between Tibet and China, more than 4,400 km from the source of the Mekong River in the South China Sea, in Vietnam.

During the expedition, he was disappointed at the amount of litter accumulated in the river. Pollution "visible and invisible" (heavy metals, in particular) is increasingly felt, which made him terribly swollen and infected wounds covering on his feet.

Its privileged meetings with the population

His bet to travel alone to meet the locals, understand and share their living conditions, access to clean water and energy, was richly rewarded. During his expedition, especially in China and Vietnam, Rémi was amazed by the hospitality and open-minded people he has met.

He took advantage of these privileged contacts with the population to raise awareness, with the support of photographs, the importance of the preservation of drinking water and the various sources of pollution of the Mekong. He did not let to slip any opportunity to explain and demonstrate the consequences of our present attitude.

It was a very difficult mission, knowing that most people approach the subject for the first time.

The lack of infrastructure and facilities, poverty, incivility and traditional habits of people ... explain the proliferation of household waste.

The concentration of litter is so important in certain areas that we can not longer distinguish the surface of the water. It is covered with 15 cm of trash of all kinds.

These wastes are located on irrigation canals going through small towns. By creating this artificial lid on the surface of water, the quantity of oxygen decreases.

This can have disastrous consequences on organisms living in the water and thus the amount of fish that is the main food for the residents along the river.

Household waste and heavy metals are the main causes of diseases affecting populations along the river. Water consumption, leachate (residual liquid that comes from the percolation of water through a material) and fish infect locals. Defects may appear after the absorption of water or food containing all kinds of heavy metals.

The accumulation of household waste leads to environmental pollution.

Also, a negative image of Asian countries will be perceived by other countries.

Recycling exist in Asia. All plastic bottles and cans and glass bottles are collected, stored, and transported to a recycling center.

But what do we do with household plastic waste?

Waste plastics are derived from:

Two main categories of plastics can be distinguished:

• thermoplastic: high density polyethylene (HDPE), low density polyethylene (LDPE), polyethylene terephthalate (PET), polypropylene (PP), polyvinyl chloride (PVC) and polystyrene. These wastes, which account for 80% of the tonnage of plastics, melt under the effect of heat and regain their strength on cooling. These plastics can be recycled and regenerated

The basic idea is simple: give the plastic household waste at the end of life their original form, oil.

Plastic is essential to our daily lives. The interest is to get it to make it useful.

Plastic waste, including non-recyclable, are crushed into small strips. These strips are then heated by pyrolysis above 400 ° C in tanks.

The aim is to transform the gas into which plastic is then converted to brownish liquid.

The resulting liquid is the FUEL that can be directly poured into the tank of the car. It can be used as well without additional refining or processing of the car. It is compatible with conventional diesel.

The entire conversion process is constantly monitored to obtain a usable liquid fuel.

Due to the number of people in this country and its location on the river, Vietnam will be the starting point of the initiator project in South East Asia. The ship would be able to convert 225 kgs of plastic waste per day in diesel - 67.5 tons per year.

It could thus produce more than 45 000 liters of diesel fuel per year.

The production cost of this diesel "recycled" should have a lower cost than conventional diesel.

In addition, mixed plastic waste, considered non-recyclable and non-recyclable, have always been destined for landfill. This project will divert thousands of tonnes of waste from the river.

Previously impossible, this waste would now be bound to find a second life.

• The barge can be built in France, in one of the many projects the Atlantic coast.

• The Unit "transformation / production" can be conducted entirely after a short study engineering in France, where being the result of a combination of several elements existing on the market.

• Modules "energy" of the systems will be used also on the market: they can be optimized.

The technical implementation of all reasonably last for 15 months.

The various steps such as the technical realization, construction of the barge, equipment units including processing, testing and validation can be carried out in a suitable shipyard.

Expedition Terre Inconnue is a French non-profit NGO for humanitarian purposes. It focuses on access to safe drinking water for all by improving housing and sanitation. This association was created after the first expedition to cross the continent in Australian current. A sporting adventure over 5000 km to meet the Aborigines peoples. Lack of water during the crossing was the trigger for the creation of the association.

Tecknisolar, created in 1992 by Pascal Barguidjan, is a laboratory R & D and design, in the fields of electronics and other, with applications in the automotive industry, military and agribusiness. This laboratory also develops applications related to renewable energy.

Carbo Industries is a company created in 2010 by Julien Reemers. She accepts his skills in the areas of design, engineering and production of high performance composite parts. It also operates in the management and organization of projects related to boating, especially in offshore racing.

We'll see, in time, improve on several axes.   The diesel production with these plastic waste will remove some of the waste water, which will significantly improve the quality of it.

Waste collection is provided by itinerant buyers - formal or informal - that make the "door to door". Itinerant buyers mainly involved in the central districts of the city. These collectors select the waste they want to recover, that is, those with a market value, often with a strong specialization (paper, plastic, glass, ...). This activity allows collectors to have an additional significant salary of between 2 to $ 3 a day.

Informing local people of the benefit of this project, residents will have the opportunity to generate more revenue by collecting other plastics that previously had no market value.

A finished product that will be used for all diesel vehicles.

A heritage development by improving cleanliness, impact on the environment and the country's image.

Awareness made through our interventions in schools.

Your participation is vital to the success of the project.

The association Expedition Terre Inconnue has managed to raise € 2,500 to fund a part of the equipment but we still need you to complete the purchase.

For the pre-project to be created, we need to raise € 6,407.20. This will be used to buy the demonstrator machine that will be used in schools for lectures and thus will be able to convince future partners of the benefits of this great project.

To this sum, we must also add the amount of € 400 reward appropriately to the kisskissbankers who will embark on the adventure with us.

Please find attached the specifications established by the Nippon society. The amount is 1,182,000. Do not be afraid it is JPY. So converting, we obtain the sums of € 8,907.20

As stated previously, the purchase of this demonstrator machine is only part of the project. If our collect, and that's what we hope, exceed our goal. The money will be invested in the project.

To give you an idea, you will find enclosed the budget for the project "Plastic to Oil".

We are aware of money asked. This is a significant sum for the purchase of this machine. It will serve us in schools to educate students because the best way to improve our living conditions is through education.

Nature does not need us, whatever we do it, it will adapt and regenerate. But we need it to live and some people to survive.

I also wanted to thank you on behalf of the entire team Expedition Terre Inconnue and my staff for your time and consideration on this project.

Many thanks for your help.

Previous rewards + photo of the Machine signed by our Team

Previous rewards + Above + film of the Machine in operation

Previous rewards + the book of the Mekong Expedition. We are currently in the process of writing the book. We hope it will be ready for June.

Previous rewards + Presentation with the machine for you and your employees, as well as schools.

Previous rewards + exclusivity (your name on our media support)