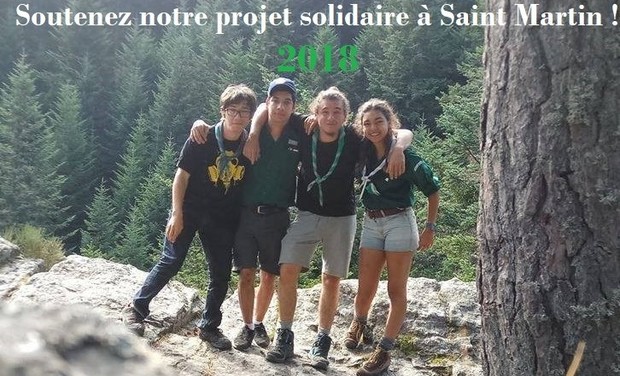 We are a team of 3 young Scouts, aged 19 and 20, attached to the group of Bron Saint-Exupéry. The team is composed of Benoît Miquey, Mariyam Bouzerzour and Justin Malcey. (from left to right in the photo)

The team was formed on a common history, but also on solid bases of friendship which are the cement as well as on the desire to realize together a Scout solidarity project in St Martin.

We have been part of the Scouts and Guides of France movement for 10 years now.

The Scouts and Guides of France are an association recognized for public utility. They are approved as a popular education movement by the Ministry of Youth, Sports and Community Life. They are open to all, regardless of origin, culture or belief.

The St-Martin construction camp was proposed in response to the devastation caused by hurricane Irma on August 30, 2017. It has made several controversies about the assistance provided by the government to the French Martinois. The scouts of the metropolis then decided to help for a summer, through the companions, to rebuild; clean and animate all kinds of activities with young children on the island who lost everything.

This project of solidarity in St Martin is the culmination of our Compagnons years, the realization of our dreams and the values ​​that were transmitted to us within the SGDF movement, such as commitment, solidarity, openness to the world, to others and to differences.

We have known each other for more than 13 years, and this project together, we really want to heart because it allows us to act and to concretize what is in our minds since our youngest age: a project of meeting, sharing and reconstruction for a population that is, for the moment, foreign to us.

Because we do not want to make a tourist trip, but on the contrary we involve ourselves, on our scale and our measure, to the improvement of the daily life of the young St-Martinois. We want to be really useful without playing the superheroes.

We will receive much more than we will give them; it is the simple and beautiful observation that we made of our various experiences ...

This project, which will last one month on site in St-Martin (we will leave from July 14 to August 12) is primarily focused on the meeting and the discovery of the other, which we still have to learn as well as on the reconstruction of an important part of the island.

Our action will mainly consist of the reconstruction and redevelopment of devastated homes and premises. We will also do animation for children who have not gone on vacation.

We also have plans to build a library on the island, in a poor neighborhood and in partnership with the SGOMI-OR-AHP association.

A week is also devoted to discovering the country, its inhabitants and its culture. We have planned some trecks in the jungle to discover the French island, and the protection of its fauna and flora. We also hope to build lasting and strong ties with the residents of St. Martin. We will see on the spot how this exchange will be built and how to make it last.

We will use the funds raised to help finance our trip, which we pay in full. (the plane tickets are the most expensive)

Our action on the spot, in Saint-Martin is totally solidary and voluntary.

In 2018 and last year, we already had a lot of jobs that allowed us to raise 5500 euros. (here is an overview of our budget)

We would miss about 500 euros to leave, hence this call for donations.

If we exceed our goal of 500 euros, the extra money will be donated directly to SGOMI-OR-AHP.

The Scouts and Guides de France association will collect the entire collection.

We thank you in advance for all your donations and we are counting on you !