Hosting our Queer Family from Białystok in Brussels! 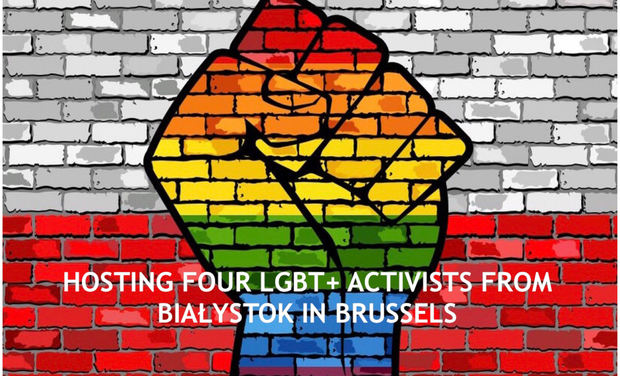 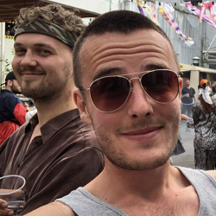 We are Marek and Joey, we were coordinators of the Queer Stagiaires LGBT EU trainees group in 2017, when we organised a fundraising event for the victims of the persecutions in Chechnya. Check out the recap below!

Today, we call on you again for help!

As you might have seen in the news recently, the first ever Pride March held in Białystok, Eastern Poland, was disrupted violently by hooligans and ultra-right wing activists. Many young participants, who build up a lot of courage to fight for their rights and for the rights of their peers, were attacked, insulted and impeded from participation. Which happens on top of an already increasing homophobic climate in Poland. Representatives of the Church in Poland, together with politicians of the government party, openly call LGBT people “a plague”, “an anthropological mistake” and a significant number of local authorities declared their municipalities “LGBT free zones”.

This rhetoric encourages homophobic attitudes and legitimises violence towards LGBT+ communities. We remember where this lead to in the previous century. Polish LGBT+ people are under attack and they are in need of our solidarity and help. We need to show them that we are one queer family that stretches from East to West and from North to South.

It has been 50 years since the Stonewall Riots took place and today’s Stonewall is happening at the outskirts of the European Union. We are privileged in Belgium to be able to celebrate our Pride. However, for so many in the EU such a celebration is still a long way. Experiencing violence was always the first phase of our Queer Movement, now it is up to us in Belgium to support and reward people that truly fight for the LGBT+ cause, by risking their health, wellbeing and sometimes even their lives.

What are we going to do?

Here in Brussels we want to do something for the courageous marchers of Białystok Equality March, for them to get a deserved break but also to give them an opportunity to bolster themselves to continue the much needed fight. From 12 until 16 September we will host four people in Brussels that were directly involved in the events that happened on 20 July in Białystok. We plan to give them a small summer holiday, combined with activities such as visiting ILGA-Europe, the Rainbow House, a guided tour through queer Brussels and other useful meetings and visits.

And we need your help!

For this project we need some (financial) help to cover for the travel expenses and the expenses of their stay, so their time in Brussels is truly one without worries but only one with opportunities. Here below we will sum up the estimated costs, which establishes our fundraising goal. However, we emphasise the surplus will be transferred to the Teczowy Białystok LGBT Association for future activities.

If you have any questions regarding this fundraising, please feel free to leave a question here at the FAQ tab or to get in touch with us (see e-mail addresses below). We aim to remain as transparant as possible with what happens with the money, additionally we organise a solidarity event on Sunday 15 September in Brussels for the activists and supporters to meet each other.

The four participants from Białystok have been suggested by Teczowy Białystok, the organisers of the Pride. The money collected through this site will be transferred to our private bank account and will solely be used for the purpose of this project. KissKissBankBank takes 5% commission and MangoPay 3% commission from us, when you pay for your donation you will not be asked for extra fees. In order to safely make a donation through KissKissBankBank, a Facebook login (or the creation of an account) is required.

Postcard from Białystok with personalised thank you!

Our heartfelt gratitude written by yours truly and the participants on a card! To be send to your address if you DM it to us or you can pick yours up at the solidarity event on 15 September!

Group photo of the participants!

This weekend eternalised in a photo, for you! Pick up at the solidarity event on 15 September of to you delivered if you give your address in a DM:)

Our experienced guide Marek will take you through the queer (his/her)story of Brussels! Guided tour to take place on 04/10/2019.

Who else sets the mood than composer Szymon Brzóska, pick up his album during the solidarity event on 15 September!

As a top-notch Polish artist based in Brussels, JoBee is a true supporter of our cause. The buyer of this album will receive it on the solidary event on 15 September.

As a top-notch Polish artist based in Brussels, JoBee is a true supporter of our cause. The buyer of this album will receive it on the solidary event on 15 September.

For this reward Joey will pick you up with his motorbike and drive to a dreamy location just outside Brussels... We can settle for an evening after work in the week after the event on 15 September.

Young Polish painter living between Poland and Belgium. She was an MFA student at KASK in Gent and previously studied at the Academy of Fine Arts in Wroclaw. Her evocative paintings and drawings capture the innocence and uncertainties of childhood and are floating between past and present.

Multidisciplinary Polish artist living and working in Brussels. Describing herself a ‘junk collector’. She transforms humble, discarded materials into seductive poetic, biomorphic sculptures. Works such as these won Wolska a prestigious Salon de Montrouge prize in 2014, which led to the presentation of her works at Palais de Tokyo in 2015.