Wanna help, and interested in a young man’s project ? Help him finance his own research work between species! 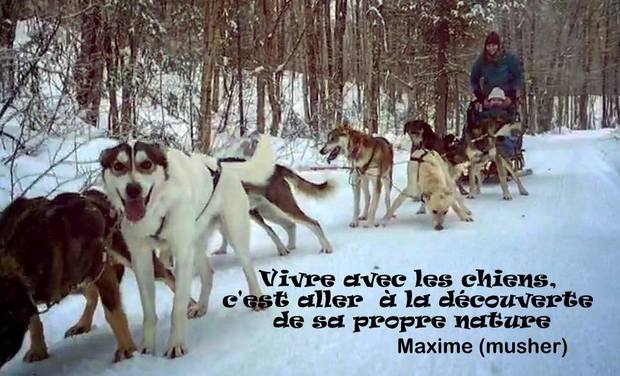 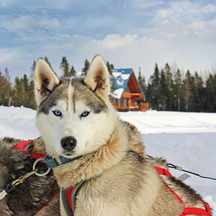 After a succesful experience on the pathes to Compostella, my son Mehdi-Benjamin came back deeply transformed ! Maturity, tolerance, sense of responsabilites... He began to find out who he actually was...

He finally knew what he wanted to make of his own future : becoming an anthropologist !

Now that he works on his mastery work (university memoir), his choices went for the interspecies relationships and, more particularly, the relationship which builds up through time between dogs, and their musher.

The originality of his project is to work with the dogs in order to deeply understand their relation with Man... through the animal’s eyes.

His research will begin this december 2019 and during the whole winter season at Saint-Thècle (Mauricie; Québec) with other well-skilled mushers like Maxim, from the Canine Ranch “Manitou”...

Mehdi-Benjamin is clearly conscious of his project’ harshness and therefore chose a  methodology settled on the observation and active participation in which he will adopt (and adapt) the behavior of the « privileged idiot » (Piers Locke, 2017).

This behavior will permit him developing his own relationship, emotionaly but also physically, with the dogs through numerous daily and inter-specific activities,

This, in order to better understand the original link between the dogs and their mushers.

Photographs, films (remote camera fixed on the dog’s head, for instance), exchanges with mushers, ... That, will complement the subject to analyze, and exploit this material

The objective is to realize a written analysis which should be consequent, rich, and innovating enough to open up the doors to a post-graduate work.

That, through the better understanding of inter-species relationships, with the aim to better the animal’s well-being facing human beings :

This ambitious project, though quite impassionated, needs lots of resources: time, but also  a challenging material. Books, updated and technically fit audio-visuals, ways of moving easily... Quite a financial challenge alltogether.

The raised money is simply a thumb-up, a little help, for young Mehdi-Benjamin to keep going ahead !

A suitable vehicle is compulsory and also fuelled enough in gasoline, car’s maintenance,winter tyres, insurance, ... (60 $ CAD/each and every return trip).

The Research field (Canine Ranch Manitou, notably) is only reachable with a car (about 120 miles from the UN. Campus, without any possibility to live on site). Mehdi-Benjamin will have to go there and back 2 to 3 times a week, undepending from the weather.

Books and readings from anthropologists, biologists,well-known philosophers as others less exposed ones, but also relevant ( 200 $ CAD min)

Let apart the 8% (5 % commission in favour of the KisskissBankBank + 3 % de bank expenses), Mehdi-Benjamin is building up a capital which will help him concentrate on his research, which is capital, of course.

If you think that, therefore, the budget needed will be useful to face these expenses, please feel free to help a young man realizing his useful dreams

(or 22 US$) Counterpart + original A5 Photograph

Original quality paper (form A5) will be sent to you through the Post service Thanks ! · Delivery March 2020

Thank you for helping out our Youth reaching his precious goals !

I will personaly send you my deep thanks in the name of my son (through mail, messenger,...)?. Any contribution will help him succeed in his wonderful project... Therefore, thanks, from the depth of our heart, for our Youth looking for a bright future.

Counterpart + photo A nice pic from Quebec - postal card – sent through mail (Messenger, Whatsapp, ...) will thank you for your spirited help.

3 original photographs of Québec - printed on quality paper (A5) will be sent to you...A thoughtful memory of this sensitive trip to the heart of the world. · Delivery march 2020

(or 60 US$) Everything + cute small photographs book

A 10 + original photographs with comments on Québec ... To bring in your own library in memory of your kind help for one of our kids. · Delivery March 2020

(or 100 US$) Everything everything and a small souvenir of Quebec ...) Accompanying this little photo book, I will add a typical gift from Quebec : Maple syrup, illustrated recipes (with maple syrup, famous “poutine” (!), ...), a jolly surprizing gift ! · ·