Restoration of a 111-year-old film shot in Venice

CONTRIBUTE TO THE RESTORATION OF A FILM IN 1908: The meeting in Venice between the Kaiser Wilhelm II of Germany and the Royalty of Italy. 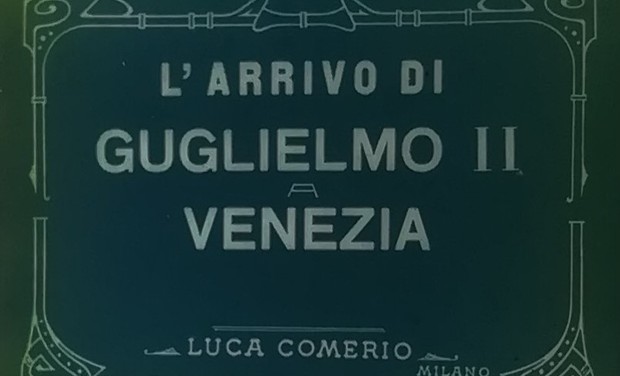 Restoration of a 111-year-old film shot in Venice

We are restoring a 111-year-old film, of which we have the only part that survived. We are in possession of a film made of nitrate dating back to 1908! The film was made by Luca Comerio, one of the greatest pioneers of Italian cinema, on the occasion of the meeting in Venice between the Kaiser Wilhelm II of Germany and the Royalty of Italy.

Through our research, we discovered that this film is actually a reportage originally divided into three parts and that we have the only existing segment of the third. The first part is kept at the Fondazione Cineteca Italiana, which has given us their precious collaboration.Our goal is to restore the two parts, printing them in a single copy, thus returning to the public today a cross-section of Venice and the history of the twentieth century. We can do all this thanks to your crucial contribution!

When we found the copy, we immediately realized that it was a very precious document. We could never have imagined, however, that there were no others in the world! It is a 35mm film in nitro cellulose (the first material used to make film stock) and colored in light blue. After some research, we discovered that it was the third part of the Comerio reportage entitled "Meeting of the Royals in Venice" (there are also variations of the title). After identification, we proceeded with the intention of reconstructing the most complete version possible.

But what exactly is this film?

Meeting of the Royals in Venice (Luca Comerio, 1908)

The film is a reportage, which documents the meeting between the Kaiser Wilhelm II and the King of Italy, on 25th of March , 1908. The villas that are overlooking the Grand Canal, the Rialto bridge, Piazza San Marco crowded with people, the Church of Health, views of the lagoon city, its monuments and historic buildings, all are framing the city of Venice, revived in all its glory.

Luca Comerio, resuming the events from a boat - with a lot of splendidly modern "real" and inevitable fluctuations of the camera - made the meeting between the German Emperor and the Italian King, eternal.

The research led us to the Fondazione Cineteca Italiana of Milan which, to our great satisfaction, accepted the collaboration by providing us with its part of the reportage. After obtaining all the existing material, we went to the ANIM film restoration laboratory of the Portuguese Film Library in Lisbon, which carried out the photochemical restoration of the film, superintended with us of the Hommelette cultural association. Thus, we obtained a first part of the work: the 35mm reprint of the colored part of the documentary. In fact, in the past, there were no color negatives and there positive was colored by direct intervention. For this procedure, the ANIM laboratory has applied what is called the Desmetcolor method which reproduces the original coloration, in our case, blue.

What is still missing?

We have to proceed with the second part of the project which involves reprinting the B/W part. To do that we need you all to contribute!

Why restore the film?

It is estimated that the early cinema has lost a lot of films and this testifies a huge gap in the history of Cinema. Every discovery, even if brief or incomplete, requires always a work of preservation and restoration. So let's fill these gaps, adding the missing pieces, hoping to be able to save as many films as possible!The opportunity then, is also to show one of the most admired cities in the world, for its timeless beauty, within an important historical event that portrays and embellishes it.

Who was the director of this precious and unique reportage? Luca Comerio

Luca Comerio (1878-1940), absolute pioneer of Italian documentary and reportage, was born in Milan and soon learned the rudiments of photography. With the proceeds of the victory of a photographic competition in 1907, he went to Paris and bought, according to legend, the first camera directly from the Lumière brothers. Since then, Luca Comerio has dedicated his life to capture our country on film, documenting its history from the early twentieth century. For example, we owe him many of the films shot on the front of the Great War, many of which have survived until now.

From restoration to valorisation

Each film restoration project, aimed at the complete reconstruction of films, documentaries or live footage, already has the merit of being a cultural operation of historical importance. In with this particular film, we will recover and integrate the filmography of Luca Comerio, one of the Italian cinema major pioneers. Not only a cinematographic operator of the origins but a real director of his time. When this little gem will see the light again after 110 years of waiting, our main recipients will be international festivals and the historical-cultural events that can host the screening. The primary objective will be therefore its disclosure, in any form and context.

Born from a group of friends passionate about cinema, the Hommelette cultural association is an explorer of cultural spaces, with particular reference to the audiovisual forms. Several historical research on Cinema has led to the realization of projects of film restoration, enhancement of family films and video-installations.

We are open to collaborations with artists and other associations because we believe that the greatest experimentation is the sharing of ideas, spaces, existences. To his credit, Hommelette, has already reproduced the restoration of the film Le fer à cheval (1909) by Camille de Morlhon, realized in 2016 in collaboration with Fondation Jérôme Seydoux-Pathé in Paris, at the laboratory L'immagine Ritrovata in Bologna.