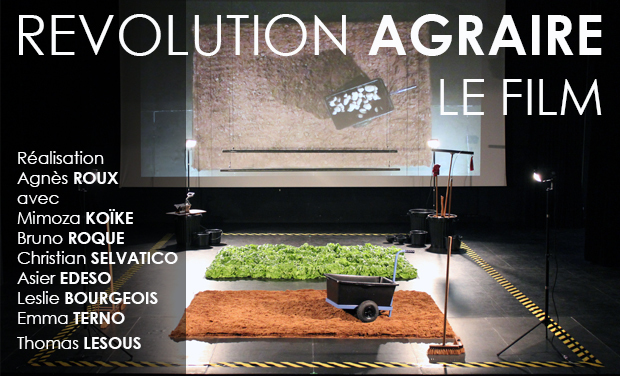 at the Chantier 109 / Anciens abattoirs, Nice

This movie will be made from the Performance Installation

created in April 2015 at the Théâtre des Variétés in Monaco

REVOLUTION AGRAIRE is a transversal form stemming from a research program that started in 2009 and which crosses the platforms of visual and performing art within Le Logoscope. This collective creation allows conjoining the skills, the spaces and the temporality of exhibition with those of danced theater. Its original form was presented on Friday April 10th 2015 at the Théâtre des Variétés (Monaco) : we call it the 1.0 Version.

From March 18 to 26 2017, the creators of REVOLUTION AGRAIRE will gather anew to make THE MOVIE of this 1.0 version at the Chantier 109 in Nice. The history of this place, past and present, matches perfectly with this project since it is a former City slaughterhouse now converted into cultural site. Therefore the Chantier 109 is the ideal place to host the shooting of this MOVIE.

The REVOLUTION AGRAIRE MOVIE will allow us to broadcast this lively creation to video Festivals and Artistic sites. It will also enable its archiving and transmission to other teams of performers for future versions of this performance installation.

A preview of the MOVIE will be presented in Monaco at the end of 2017.

The making of THIS MOVIE will allow us to set a video recording apparatus within the REVOLUTION AGRAIRE device itself. It will thus confer a scientific exactness along with giving homogeneity to the pictures of the future versions. It will also be the occasion to sharpen our research by sharing our experience with employees who have known the abattoir when it still ran.

The DVD of the MOVIE will be enhanced by several bonuses that will comment the research and elaboration process of this creation.

PRESENTATION OF THE GLOBAL PROJECT OF REVOLUTION AGRAIRE :

The creators of REVOLUTION AGRAIRE have been working on a research program since 2009 through which they ask the following questions :

- What relationship to we have with food ?

- How did our food chain evolve ?

- How do we mix the temporality of an exhibition with the one of a performance ?

- In what way is the sharing of languages the source of mutual enrichment of artistic practices ?

Its device is inspired by agronomical experimentations called in parcels which rely on the following points : Replication, Random distribution and Local Control. This experiment is not only made of an instrumented controlled observation (through video), but also an observation provoked by an experience schedule. REVOLUTION AGRAIRE thus foreshadows an experimentation that confirms or adapts its initial logic by comprising what is spectacular and meaningful.

REVOLUTION AGRAIRE is a space that is defined on the floor and divided into areas in which two groups of performers activate the experiment. The first group embodies a livestock of domesticated anthropomorphic animals. The second group represents peasants, people who work in the shadow, who lead the repetition of actions and have to maintain the initial architecture of this parcelled landscape by using tools. Within this agricultural metaphor, the spectators, who walk around, assist to the implosion of the set up system.

In order to do this, the creators of REVOLUTION AGRAIRE have somewhat modified the controversial term of Anthropocene*. The latter supposes that the action of the human species is a genuine geophysical power that transforms spaces, landscapes and ecosystems. Therefore REVOLUTION AGRAIRE allows the exploration of the Anthropo(S)cene by transfiguring our relationship to the world through visual, choreographic, narrative and aural dramaturgical schemes.

* Change of geological period which started at the end of the 18th century with the industrial revolution : a period encompassing the growth of the intellectual and technological influence of Mankind on the terrestrial system.

What is the human species if not a livestock left fallow ?

Tinged with humor, the story of this experience leads the public inside the poetical world of a man-eating gourmet peasantry and draws on quotes from the book La Cuisine Cannibale by Roland Topor (1971).

The V 1.0 of REVOLUTION AGRAIRE is also meant to be reactivated by other groups of performers depending on the places and structures hosting this project. This reactivation will give place to other versions : V2.0, V3.0 (…) In order to achieve this experiment one or two heads of game will accompany its re-edition following a list of requirements.

REVOLUTION AGRAIRE will therefore vary by testing its principle and framework with other realities and sensitivities.

It is a Mixed Media* Laboratory for Research in Art based in the Principality of Monaco. Dedicated to creation and experimentation, it gathers professional artists. Le Logoscope is concerned with current artistic practices. Since 19 years, this association has been allowing the development of research in autonomous disciplines which feed collective and transversal fields of creation : www.lelogoscope.com

* The term Mixed Media both implies the use of new technologies and traditional tools. It is a sort of pun with the term multimedia.

If we reach the minimum budget, the artists will work for free.

The 4 000 € we ask for will allow us to purchase the black dance mat which defines the floor limits of the installation and the small equipment required for its setting.

1 postcard + 1 invitation to the preview