A self-financed short-film, a mesmerizing story, a hot topic, an electrified crew. We need you to make it come true! 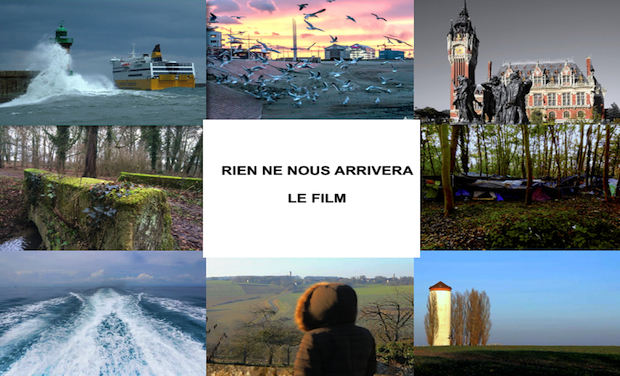 It is a movie in tribute to that woman I met briefly during a location scouting, before I even started writing this movie, and whom I don't even know by name. It would be hard not to remember her suffering face, in the tent… I didn't dare to ask her what was going on, so I just said : "are you OK?", and she answered timidly "Yes, thank God".

Miram, 32 years old, in search for a piece of herself, crosses two big african deserts, the Mediterranean sea, Italy and France, in order to reach the other side of the english Channel. Miram, who finds herself in a migrant camp 60 km away from Calais, will try every night to stow away in one of the truck bound for England, by ferry. Night attempts, fed by the hope fostered in the day time, and on a daily basis. An everyday life affected both by the cold shared in the ripped walls of the camp tents and the humidity of the surrounding forrest, and by a particular cohabitation between migrants where attachment and detachment become entangled, as well as between themselves as for the scene. But Miram has no time to lose, nor the willing to commit to anything at all. Legitimate journey, as for the sacrifices ahead, she is ready to do anything in order to chase up her 4 year old little boy, that her ex-husband kidnapped and dragged away on the migrants' road… towards Europe.

To reflect on migration in the cinema, and share with the members of the audience a certain perspective, neither judging nor guilt-making, for anyone, such is my motivation for this project.

This project is a cinematographic unveiling of some aspects of the irregular migration. It is not intended to be a direct account of the situation, even if I want to tell the story of a specific individual, who came in France for a specific purpose.

It is not a movie about the "misery" of the migrants, but about their vitality, their ability to adapt, and their struggle for the life they have where they land. It is neither black, nor white; rather gray…. and many more colors.

The movie tells about a time of life that is by no means trivial, because it expresses the dimensions of the human's frailty facing the imperatives that occur in a life path. We walk along with the strengths and weaknesses of Miram, we explore the aspects of her passion and tell about the consequences of her unfortunate situation. We find ourselves facing her days and nights marked by determination, effort, doubt, wait, precariousness, and acceptation. We simply dive into the obviousness of the fight she's leading. This young woman, who is at times devoid of speech and action, remains the master of her purpose, with a wealth of the maternal instinct and of the hope that keeps her alive, almost. Indeed, the multiple twists don't seem to weaken her, quite the contrary; despite the fact that her memory is burdened with the journey she completed already.

How can she and her friends at the camp manage to recharge? The features are tired but the eyes are lit up. It is self-mockery, playing-down, this strength for carrying on and keeping hope alive. They are facing a reality that is quite an adventure, and in this adventure they are up-front with the encounters.

We are definitely dealing with a difficult subject, both simple to watch, and above all mesmerizing by its human reality. This movie is a look on life, where unfortunately not all Men are equal, but they will need to have the same right to hope and to try. A look on life, the one that surrounds us, in which some are ready to kill one another in order to acquire a light duvet, for nights in the street.

" This movie deals in its own way with the immigration scourge, not a meaningless story because each road companion Miram has, lives on thanks to a motivation of her/his own. Wether it is the search for an imaginary El Dorado for a better life, or furthermore for a loved one, the most important thing is to believe it. For Miram, between the cold, the danger to life, the full self-sacrifice, and the denaturation of her woman body, her purpose is this one : to be able to hold her kid again."

Journalist, with a passion for cinema. After writing a thesis in Information and Communication Sciences, I went back to my passion following trainings in directing and in script-writing. I directed a first short-film "Miel Amer" ("Bitter honey"), which was broadcasted at the "journées cinématographiques de Carthage" in 2014. I write a lot, it stays on the desk, no support funds; now I am going to try to tackle fate, by asking you and seeking for your support.

I am a young director of photography and cameraman, graduate at Tunis' audiovisual and cinema School. I live in Paris and work on several projects, between France and Tunisia. I've worked on various fiction projects, feature films and short-films, but also documentaries, television commercials, and video clips. « Terre Glaise » by Florian Vignes, « Cinemagic» by Jonathan Babinard, « Catharsis » by Tahar Mhamdi, « Authentic » by Anthony Lemaitre, « Fan de G » by Fabrice de Boni, « Moon in the dark », by Tiff Lacey and Sean Bay.

After a training in history and aesthetics of contemporary arts, I turned over to the contemporary theater, then to the cinema, with the same curiosity for the projects and the new adventures. As a script, I took part in the shooting of several short-films : « Le trajet et Un moment de faiblesse » by Nicolas Robini, « Là-dedans » by Léo Dazin, « Erreur médicale » by Samuel Marciano, and a feature film « L’ami » by Michel de Carl Denot and Pascal Merdrignac.

Graduate at INSAS and relaying on 30 years of experience in the cinematographic industry, first as a film editor then as a director of post-producion, I have been a trainer at the CEFPF since 2001. Teacher at the ESRA since 2007, educational coordinator since october 2012 and director of productions at the ESRA since 2014. I am also the president of the association of the directors of post-production. In xx I created my production company Wild Track Production.

Graduate at the ESRA Production school, I started my professional career at GEDEON Communications as a production assistant. Specialized in logistics and shooting management, I had the opportunity to collaborate in different kind of projects, concerts recording, television commercials, tv identity, corporate videos, and more. Now I wish I can focus more on fiction films; the adventure of making "Rien ne nous arrivera" allows me to take this path.

Our project is self-financed, which means the financing is based only on the income from this fund-raising. We are volunteers, but despite this we still have a lot of charges!

Most notably, we wish to :

- be able to recreate a camp that is believable, and thus that necessitates a big number of elements we need to gather and stage

- provide accommodation for the crew, pay for their transports and for their food; and a crew has to eat!

- last but not least, and that's the less glamorous, we have to pay for insurances, for the equipment, but also for the venue and its sets

Well, I am sure you have understood, we expect a lot from this crowdfunding! Please contribute and share it as much as you can!

We rely on you!

Thank you very much!