Where does biodiversity come from? How are the new seeds produced? To whom do they belong? 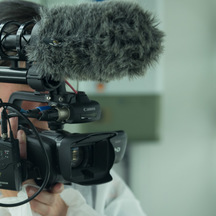 Do you know how to harvest a tomatoe seed ? Have you ever witnessed a flower castration ? Do you think you would succeed in the attempt to access a super-secure biotech lab? Honorine did it, as she’s working on the « Seeds of the Future » documentary film project.

Wether you are cartesianist or religious, a strong advocate of organic food or a fast-food compulsive eater, if your curiosity surpasses your fear to discover where your food really comes from, please support this project !

Honorine, filming a researcher at the French National Institute for Agronomic Research

From the beginning of the 20th century, more than 75% of agricultural biodiversity has disappeared.  It is one of the negative consequences of the great « modernization » of agriculture, which enabled a huge increase of productivity. In 2040, the world population will reach 9 billion people, who will need to be fed. In this double -environmental and food- challenge, seeds will play a key strategic role. They represent the future of a farm system that will have to produce better in a bigger quantity.

It’s been a while now that multinational seeds companies have been testing genetic engineering tehnics in laboratories, which are covered by patents. Meanwhile, small farmers are organizing themselves collectivelly to take back control over the varietal creation process. As the first seeds exporting country worldwide, France is particularly concerned by this issue and attempts to preserve its world leader position in the global plant breeding business.

Phytogenetic resources that would make it possible to create climate change-resistant or parasites-resistant plants, also arouse covetousness. A treaty, the ITPGRFA, has been adopted by 130 countries in 2004, in order to reinstate phytogenetic resources as global commons and to put them into free circulation. But new national laws on property rights are already threatening this heritage, leading to the privatization of those resources.

In light of this context of international debate, and –sometimes- global conflicts, the filmaker Honorine Perino, in partnership with Rés’OGM Info, wanted to have the « seeds of the future » as the core subject of her next documentary film.

We would like to explain with simple words what led Honorine and Rés’OGM Info to work on this project together, but this is not an easy task.

Since the passion often take hold over the fear to fail, we rolled up our sleeves and got into this collective venture, with the strong intention to reach our final objective. Still we were fully aware of the challenges that await us.

Honorine, too, would like to tell a few words, assuming the intellectual rigor that characterizes her and make her work of such great quality:

Honorine, the filmmaker of  'Seeds of the future"

Over the past 20 years, the seeds topic has been of growing importance for me, through several films. My first documentary film was untitled « Who talk about patenting living beings ? ». It came out in 2001. The « 88-44 » European Directive on the right to patent genetic sequences had just been implemented. I was worried about potential abuses, and particularly about how GMOs would lead to a growing number of patented plants.

Scientific technics have evolve very fastly. The sequencing of full genoms only takes a few days in 2016, whereas it used to require several years only 10 years ago. Just like data processing and computer applications have radically changed society over the last decades, innovations resulting from genomic sequencing are now very available and deserve to be questionned. International agreements and national laws are being adopted, without any consideration for citizens. Most of them cannot understand such complex evolutions. They usually have no idea that seeds are subject to such political tensions, which reflect opposite visions of progres, opposite representations of the relationship between manking and nature.

This new film is an attempt to put back the « seeds of the future » at the heart of the public debate, without feeding polemics or controversies.

I met the seed companies and researchers who rush into the biotechnologic pathway. I had the opportunity to work with them previously, when I was a student in biology, when I was learning how to make a GMO. This is thanks to my scientific background that I have been able to access these labs as a film maker, despite the important suspicion the seed companies show towards media. I gained their confidence and now they accept to open their doors, to explain their research and show me the technics they are working with.

Moreover, I established a strong relationship with numerous stakeholders of an alternative seed selection process, especially Guy Kastler, who is the « Small-farming seeds network »  spokesman and French representative of Via Campesina. He warned me about the new threats posed by patents on living beings.

I sometimes have the feeling that I’m a fragile link between two different worlds, and to walk on eggshells. But this is the price to pay to address this issue as a whole and raise real questions about seeds.

To simplify, the Rés’OGM team and I decided to make a special focus on tomatoe, which is a plant of great economic interest. A broad range of research projects are run on tomatoe, from Crispr-Cas9 to participative and genomic selection.

I really appreciate the collaboration with Rés’OGM Info. It really gives a collective dimension to my films. We have set a steering committee, in which we discuss the view point to adopt and the last advances. Everybody can explain his opinion and make personal proposals. There the film begins its constructive thinking mission. That’s why I’m making films! "

The help from Kissbankers will be all the more valuable as the newly elected Auvergne Rhône Alpes Regional Council, which we have a partnership agreement with to cover 70% of the project cost between September 2014 and August 2017, has decided to cut half of the budget allocated for 2016-2017 by the former Council.

Should the total money raised exceed our funding target, we would use the extra funds to oganize public and school events, including film screening and debates on Seeds of the Future. We’ve been doing it on a voluntary base for a while now and we guess we’re good at it now. But this comes at a cost - transportation, device rentals, employee work participation, etc.-

So don’t hesitate to beat your best ! :)

A big thanks, a DVD and your name in the ending credits

bib thanks, the previous rewards, a poster of the film autographed by the film maker

big thanks, previous rewards, 2 DVD of the other films made by Honorine (on choice)

big thanks, previous rewards, a customized invitation for the opening, in the presence of the filmmaker.

big thanks, previous rewards, the broadcasting rights offered for the next public screening you’ll be organizing

Big thanks, previous rewards + we come at your place to lead the public debate you have organized – only France or neighbouring French speaking countries-, in presence of the filmmaker or another key member of Rés’OGM Info.

big thanks, previous rewards + your organisation’s logo on the DVD