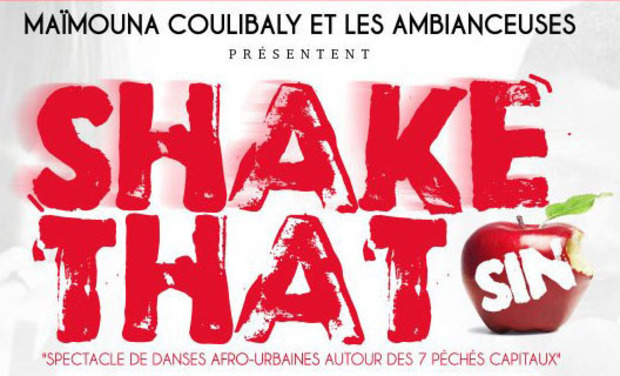 Maïmouna Coulibaly and Les Ambianceuses present SHAKE THAT SIN, the First African Urban Dance performance. They want to go  to Avignon Festival, the biggest Performing Arts Festival in the world. You can help them with your participation at this fundraising.

1 hour and 7 scenes to impersonate the 7 deadly sins…

Which will be animated, personified, sparkled up! With unique visuals and an amazing musical mix, this afro-urban dance show will go above and beyond to take you around the world with diverse dances and musics as well as using international headlines to paint each scene.   SHAKE THAT SIN, the new show from the French-Malian choreographer Maimouna Coulibaly, looks into modern issues of our societies with humor and sensuality

In a world - said to be “forward”- where run the tyranny of thinness (Greed), power and politic (Envy), natural disasters (Sloth), the energetic (and sexy!) fight between the Good and the Bad use the audience as the ultimate judge pushing you into your most intimate thoughts.   Maimouna Coulibaly uses her extensive knowledge, from traditional African dance style to Burlesque, to pull us into a world of swaying hips, butt shaking and attitudes “in a spellbinding dances led by an explosive set of skills”. SHAKE THAT SIN, a show without borders, chose a common culture, worldwide and its well-known issues. By using an international language – the body and the music – an exchange with the audience is created regardless of the country. It paid off with a successful first round of shows in Paris and standing ovations every night in San Francisco in October 2011.

If you like our performance, our vibes and you want to support us for Avignon Festival, just support us and spread the word.

Personalized Birthday : a dance video from an Ambianceuse of your choice will be posted on your facebook or mailbox + Your name in the program

Bachelorette Bash (1h, Hosting and Transport in your charge out of the Paris region + Your name in the program)

5 min Surprised Happening from 3 Ambianceuses for the person of your choice. (Hosting and Transport in your charge out of the Paris region area) + Your name in the program

Dance Workshop 6h for Non-profits or Dance School or Corp. (Hosting and Transport in your charge out of the Paris region area) + Your name in the program

30 min Shows for your friends and you, Non-profits or Corp.( Hosting and Transport in your charge out of the Paris region area) + Your name in the program