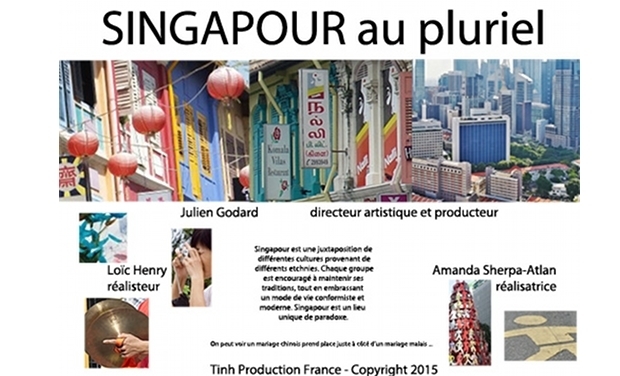 Singapore plural is an original project.

The main idea is to recreate these three neighborhoods within the same place (the exhibition), playing on the soundscapes and visually: Mix 3 sources, 3 arts.

During this walk in Singapore, I would like to explore different aspects of the Singaporean multiculturalism. Other ideas necessarily born of the various meetings in the field, and I want to keep it cool, an eye that discovers by asking general questions of urban sociology, trying to get away as possible from the shoot and Sky line that everyone has in mind when considering Singapore.

We want to convey a message on the multi- cultural Singapore.

Subsequently, we would like an exhibition photos & videos to Paris to discover as many mysteries of Singapore.

After independence in 1965, Singapore has managed to become, with very few resources, one of the most developed and most prosperous countries in the world.

The city-state is the example of successful cohabitation of different communities (Chinese, Malay , Indian ). Chinatown, Little India and Kampong Glam reveal a real authenticity. Cradle shopping centers, too full of lavish greenery. A subtle blend of Dubai, New York and Hong Kong, with its own identity.

"Each group is encouraged to maintain its traditions while embracing a conformist and modern lifestyle. Singapore is a unique place of paradoxes. »

Our team consists of four members: a producer, two directors and a production assistant.

Julien directs Tinh Production France, a production company specializing in the production of audiovisual content, documentaries and video content and video content for event communication. Julien wants to encourage the younger generation to open up to the outside world by promoting young French and international creation.

We will obtain three media (music, visual and audiovisual) which will be part of a formal abyss within each district symbolizing the three communities. This will provide a description of the mood and atmosphere of a neighborhood.

Thus, a musician exercise his art, guided by his inspiration, he will be represented on a canvas in the middle of the surrounding architecture. A painter and his canvas will flmed with this musician in the background. The videographer, who will walk behind the painter with his camera, when to him will be shown to the public.

This program will aim to complete a series of personal portraits also taken in the 3 large communities. This mixture of enthusiasm and energy and intimate portrait will be a perfect set for the exhibition Singapore plural.

I would also like to explore and discover street cultures, one aspect in particular offset from the image of Singapore's financial capital. What looks like a Singaporean skatepark? Is there a Singaporean street art? Concept so against this ultra-sanitized city-state where even chewing gum is prohibited not to mess the streets.

Finally, I would ask myself the question of death in the city, but not necessarily morbid. In such a multicultural city, how are structured cemeteries? They consist of different sections according to religion? How we organize their dead in a multicultural society?

The general idea is ultimately to explore not only ethnic multiculturalism, but also the place left for any culture other than that of finance in this tax haven and sixth most expensive city in the world.

It seems important to you Tinh Production France was born from the desire to offer video art and passion of the image, Asia. Led by Julien GODARD, the company Tinh Production France specializes in the production of audiovisual content, documentaries and video content for event communication • It is oriented to Asia , particularly Southeast Asia , as its leader himself is passionate about travel and adventure. He spent many months in Asia in order to understand its culture. Singapore is counted amongst many countries he has crossed • Understanding the issue of cultural diversity , Julien GODARD wishes to encourage the younger generation to open up to the outside world by promoting young French and international design • Production Tinh France and Julien Godard have produced documentaries in Asia and France.