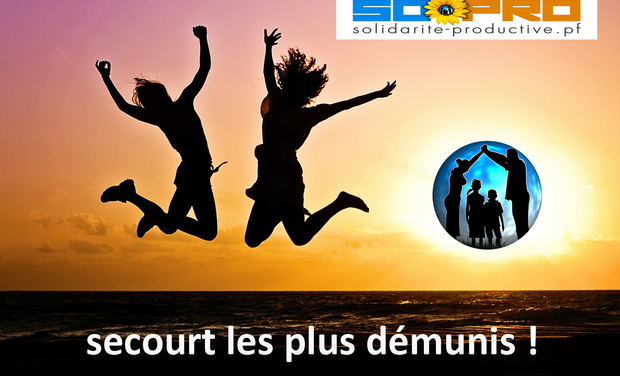 Thanks to your contribution, we are about to build a real societal solution that will be adjustable and exportable! The association Productive Solidarity  aims at gathering in a single structure the main branches, the activities and the representative tools of the united and social economy for the benefit (initially) of 8 Polynesian families living in poverty and 4 homeless.

Our action is dedicated to the outcasts, to the unemployed people who are in a dire moral and economic situation. It is based on the application strictly speaking of a fundamental definition of solidarity: " awareness between people of a common interest which entail a moral obligation of mutual assistance"

Who are we? A board of members with a coherent social, economic, environmental and cultural mission.

Loïc LABBE, the President, has worked in France, as a sales executive in the shipbuilding and the pharmaceutic logistics areas before getting involved in the issue of drinking water in Polynesia for eleven years. Also a poet and a writer, he is at the origin of the project.

The Treasurer, Thierry TRAUSCH, was Head of the French-Japanese Development Agency in Paris, then he worked as a Japanese teacher before cofounding Fenua puppets in French Polynesia. He is also a highly dedicated environmentalist, Web Master and artistic technician.

The Secretary, Véronique TRAUSCH, a student from the School of Fine Arts of Cherbourg, was president of the association “coeur d'artistes” before getting married to our treasurer and cofounding Fenua puppets. She is also an environmentalist and at times, works as a scriptwriter and director.

When is our project starting?

Indeed, it is already off the ground. Before submitting the articles of our association, it was necessary to convince and look for a municipality which would be willing to accommodate our project, which was not an easy task. Fortunately, we eventually met an open and dynamic municipal team who is conscious that "what seems utopian is nothing else than what has not taken place yet ".

We have signed an agreement of one renewable years for 0.2 600 hectares of agricultural land . At the end of this probationary period of three years we will be able to offer much more space for more families.

Here is the location of our 2.600 m2 made available by the municipality of Mahina

This land, certainly small, is located in peri urban area

The structure calculated on the scale (Useful Agricultural Area / number of active members x Rate of return) will allow us to validate the viability of the project at the social, economic and environmental level. Within two years, we must be self-financing.

The landscaped site, thanks to you, tomorrow!

You understood: This is the 1st stage of our project: Food self-sufficiency in organic farming.

As soon as the results of the structure are validated within two years, the other four sectors aimed at increased, reasoned, dignified and virtuous self-sufficiency will be developed.

Already other, larger fields await us. But we must prove the relevance of our action, master it perfectly, before welcoming a large number of economic and social outcasts. This is why, for a lasting success we start "small".

Designed to be adaptable everywhere else, we will be with you soon!

A big "Ia oara na!" from our volunteer supervisory members and their children.

A big "Ia oara na!" from our volunteer supervisory members and their children.

But by the way, French Polynesia, what is it, where is it?

French Polynesia is an overseas collectivity (COM) of the French Republic (code 987) composed of five archipelagoes regrouping 118 islands among which only 67 are inhabited: the Society Archipelago with the Windward Islands and the Leeward Islands, the Tuamotu archipelago, the archipelago of Gambier, archipelago of Australs and the Marquesas Islands. It is situated in the South of the Pacific Ocean,  approximately 6,000 kilometers east of Australia. It also includes the maritime equivalent area of the surface of Europe

Why Productive Solidarity? Because we do not want Polynesia to lose its known reputation as one of last heavens on Earth!

French Polynesia is part of the French Republic. However, it benefits from a status of autonomy of its own. In a nutshell, the French State is responsible for all the regulatory functions and everything else falls to the responsibility of the local government. Consequently, the Polynesian population does not benefit from French and European "generosities" regarding social security coverage. The most blatant example is the absence of unemployment insurance fund. No employment means no income!! This is how more than 74,000 people live silently below the European poverty line within the French Republic.

If no social uprising has taken place to this day, it can be accounted for the fact that the Polynesian people are profoundly peaceful, just like their ocean (the Polynesian welcome is legendary and we are the third safest country in the world regarding the murder rate).
Nevertheless, a brutal and badly contained modernization process added to globalization has spawned growing and rampant social inequalities (Explosion of the traditional family nucleus, delinquency on the rise, and development of informal and parallel economies. https://www.youtube.com/watch?v=clwBaG0V_tE

When we have made a success of our challenge, then our adaptable model will be implanted in every municipality of Polynesia.

Even though not a very resourceful population, Polynesians have a natural sense of solidarity and know how to mobilize. Polynesia holds the 2016 world record in Ori Tahiti (traditional dancing).

Your financial participation will allow us to give a kick start to our project, then our own production will take us on the road to self-financing.

Feed: the basis of our project

Complementary sectors of our self sufficency

What is the purpose of crowdfunding in our project?

It will allow the purchasing of:

A cord bracelet with a black pearl of Polynesian pearl oyster plus the previous consideration. (Remember that we live 22,000 km from Europe: shipments are expensive) • Delivery September 2020

A great Mauruuru roa plus a poem in reo maohi and French illustrated. Poem with original dedication by our poet president. • Delivery September 2020

The first two rewards plus a large format postcard from the painter from our association. • Delivery September 2020

The three counterparts plus your name on the special donors page of our site.

A surf pendant in pure pearl oyster pearl (Touamotu or Gambier) with cord. Artisanal piece engraved by hand Dimension (+/-) 20 mm x 55 mm + a poem or a postcard, our thought, your name on our site.

A sea turtle (Honu) pendant in pure pearl oyster (Touamotu or Gambier) with cord. Hand-crafted piece engraved by hand Dimension (+/-) 50 mm x 45 mm + a poem or a postcard, our thought, your name on our site.

A Tiki Dimension (+/-) 30 mm x 35 mm) or Honu pendant + a surfboard or bracelet. All at your choice + a poem or a postcard, our thought, your name on our site. Our mother-of-pearl and pearls are always engraved and pierced by hand.

2 mother-of-pearl proposed of your choice + your sponsor name on one of our perma-culture hives or tubs + photos and news of your sponsorship each year and seeds or cuttings from its production. + 1 poem or card

Or a beautiful black pearl mounted jewelry on the go with a local value of 150 euros.

There, you have to come: Big surprise, but not before July 2021! Contact us for conditions. Plunge into immersion in Polynesian hospitality and swimming (Land and sea) with full board - 5 days for two people - with one of our members supervising with fishing, diving and hiking. If you can't come All the pearls, plus the bracelet, the poem, the sponsorship, the photos plus the basket or a mounted pearl.