Help us to support an unexpected programming of new and experiemental music inside the Cour d'Honneur of the Palais-Royal in Paris! 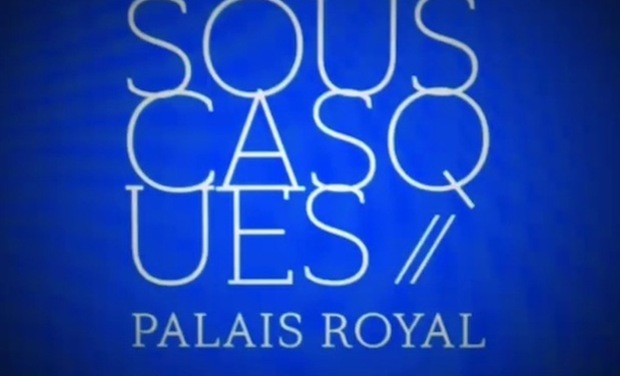 Sous//Casques is the initiative of electroacoustic music composer Jules Wysocki.

Positioning himself in public spaces like any other street musician, his main challenge is to bring experimental music compositions to people’s ears.

In order to realise his project he conceived a transportable sound device around the idea of using headphones as an ‘instrument.’ He invested in a set of twelve high-quality headphones and then, in 2014, shared his idea with friend and composer Stéphane Rives.

One Sunday afternoon, they took to the Paris streets looking for a place to set up their installation, with an eye to open and public spaces.

The concept is simple: every Sunday the headphones are made available to curious passers-by, allowing them to discover a selection of experimental sound creations.

The project is getting started !

Since then Jules Wysocki has produced over thirty concerts for the “Sous//Casques" project, based in different spots in Paris (the Jardin des Tuileries, the forecourt of the Centre Georges Pompidou, the Gaîté Lyrique and the 104/Cent-Quatre), for various festivals in different cities over France.

In 2015 these sessions paved the way for almost 40 composers from both the french and the international experimental music scene to present their work and reach a new audience. They also made it possible for several thousands of people to discover new sound practices.

We call these experimental sound practises « new » because they traverse large and often unexpected territories of sound, playing across the traditional boundaries between noise and music. These new forms of expression—despite an extremely rich and well-documented history of experimentation and innovation—remain out of reach for a wider public.

The Sous//Casques audiences are curious, but mostly uninitiated in the diversity of experimental sound practises: at these weekly sessions they shared collective and individual journeys through unfamiliar soundscapes. Many expressed the desire to repeat and further these kinds of experiences within the context of a concert.

The project we are currently creating aims to fulfil this desire.

THE PROJECT: TWO CONCERTS IN SUMMER 2016:

In order to further this exchange between composers and their audiences, Jules Wysocki turned to the Palais-Royal, with its well-loved garden and famous columns created by Daniel Buren. This site seemed to match his expectations for further experiences ‘sous-casque’.

He contacted the administrator of the site, who showed interest in the project and offered to reserve two dates for future concerts on site at the Palais Royal, starting in summer 2016. An exchange with Daniel Buren assured the artist’s agreement as well as his warm encouragement.

This will be a first for events of this kind!

Eight composers will be invited to create an original composition that engages in a dialogue with the historic site. The compositions will be presented to the public during two evening events, diffused through a system using wireless headphones.

For this initiative, Jules Wysocki is being supported by Césures, an association devoted to the active promotion of all kinds of experimental practices concerned with sound creation.

The concerts will take place on the last week-end of July and August, inside the domain of the Palais Royal : wireless headphones will allow the visitors to freely wander around the area of gardens and up to the Cour d'Honneur, passing through the Galerie d'Orléans and the artworks of Daniel Buren.

Every event will be broadcasted via 200 headphones allowing at the same time an intimate encounter as well as a collective experience.

200 visitor will be expected for each concert.

The wireless headphones are of an excellent quality guaranteed by one of the best French compagny, experts in the field.

We want to keep the ticket price for the concert as low as possible to keep the event accessible to a large public willing to participate at his new sound experience.

COMMING UP, AN AMBITIOUS PROJECT: A YEAR-LONG PROGRAM OF CONCERTS

Each event will be broadcast via headphones, allowing simultaneously an intimate encounter and a collective experience.

We expect 200 visitors for each concert.

The wireless headphones are of an excellent quality and are recommended for this kind of diffusion by experts in the field, SilenceEvents.

We aim to keep the ticket price for the concert as low as possible to keep the event accessible to a large public willing to participate in his new sound experience.

Coming up, an ambitious project : a year-long program of concerts

Expanding the original concept of Sous-casques by intervening in public, historical sites is one of the aims that the association Césures intends to pursue.

Beginning in September 2016, we envisage to present a program, on larger scale, with a concert each month during the whole year, taking place in one or several historical sites.

Twelve events will be the occasion for twelve composers (selected through an international call for participation) to create and present an original composition that dialogues with the environment in question.

Preserving a most fertile context for experimentation and practice, these project will inject dynamism into contemporary research within the field of sound art.

Each month during the year-long program, visitors will be invited to discover a new side of a historical location through an original sonic landscape.

The eight artists invited for the first two concerts figure among the most important actors of today's experimental music scene.

is one of the the pioneers of concrete music. First of all passionate about the possibilites of the  magnétophone, he met Pierre Schaeffer in 1953. Je was a member of the GRM (Groupe de Recherches musicales) from1968 to 1972, then besame one of the member of the Groupe de Musique Electroacoustique de Bourges (IMEB).He has been working with Roland Barthes, Roger Blin, Roland Dubillard, Jean Gillibert, Jorge Lavelli, Laurent Terzieff and many others.

Lionel Marchetti is an important protagonist of the electro-acoustique landscape. Composer of concrete and acousmatic music, he turned towards the field of improvisation, paying special attention to

analogie experimental dispositives. Publishing an important number of discs he is regularly present on the french as well as on the international scene. Je also created in the context of the Ateliers de Création Radiophonique for France Culture.

working as a musician and a visual artist, he has publisher numerous recordings allover the planet. He studied esthetics at the Sorbonne together with Geneviève Clancy, Iannis Xenakis and Bernard Tesseydre. His creations cover a vast field of artistic expression, becoming form through sound and image.

The japanese Paris based musician and sound artist works since several years  with water bowls and hydrophones (underwater microphones). Active in Europe, the United States, Canada and Japan, her creations arte being published by and/OAR (US), aposiopèse (BE) and dokidoki editions (FR).

Beyond the borders of contemporary, non academic music, he composes and interprets pieces of electronic music inspired by noise music. He has collaborated with a many internationally renowned artists. Winner of the Opéra Autrement/Acanthes competition of the Festival d'Avignon 1989, he also received the first price of the Concours international de composition pour orchestre de Besançon in 1990 as well as the Bourse Léonard de Vinci in1992 and the Prix Villa Médicis Hors les Murs at New-York in 1993. He also receives several state commissions.

Humain sciences on the radio - from sound recordings for cinematgraphic production, to field recordings,pegagogy, sound art and interaction, Gaël Segalen synthesizes for more than 20 years ecclectic experiences: she baptised her project IhearU (je t’entends) putting emphasis on the immediate relation between people created by sound. Starting from these multiple listening experiences and the unique character of each sound she is creatig electroacoustc compositions following free forms that evoque the sensation of multiplicity, chaos and dance.

Christine Webster is composer and sound designer in the field of experimental electronic music. Profiting from the teahings of Jean Schwartz she first turned towards post-production for Television and cinema. Since more than ten years she is focussing on the conception of electroacoustic music, spatialized into binaural 3D environment. Follwing these paths she is also researches in the laboratory for Spatial Media of  the Ensad. Her creation are diffused on radio and festivals. She also exressing herself through improvisation via modular system and laptop.

Christine Webster and Gaël Ségalen will be presenting their work as a DUO.

Both composers are part of RÉSEAU POLYPHONES: platform created for and by women within the field of sound experimentation.

Improvising musician, Anton turned quickly to an experimental approach, transforming the use of his instrument, the bass, he passed for several use to the exclusiv use of microphones and objets. Meanwhile Anton is building his own instruments, his so called “chambres préparées”, in order to develop new sound techniques as well as his personal form of expression through an intuitive and energetic approach.

Stéphane Rives is musician and sound technician. He first studied at the École Normale de Musique de Paris then focussed on the saxophone and improvised and experimental music. He participated at the l’Audio Engineering Society (AES) for INA. As saxophonist his work concerns the contemporary evolution of instrumental sound. He also works on electronic dispositives based on the larsen and the diffusion of envirnmental sound recordings. He is playing in Europe, the UNited States and the Middle East...

The associations aim is to promote, support and defend the full range of experimental sound creation, encompassing multiple media (audio, visual, sculptural, architectural, new technologies, new media), as well as any form of rare technique. Its activities are addressed to a large public on a national and international scale. The founding members are Jules Wysocki, Lucie Wright, Sarah Mallégol.

Jules Wysocki is a composer of electroacoustic music. After fifteen years of instrumental practice with percussion, he developed a fascination for sound technics, that paved his way to become a sound editor for cinema productions. His sound research is linked to cinematographic and iconographic practices, which led him, little by little, to create his first acousmatic compositions. Today, these unified practices serve as two facets of a singular experimentation embracing different fields of sound. For several years Jules Wysocki is questioning the technological developments linked to binaural procedures and the diffusion via headphones. He obtained his DEM in electroacoustic music in 2015 after having passed three years under the mentorship of the composer Christine Groult at the Pantin CRR.

His compositions have been presented at numerous festivals in France and abroad, as well as on the French and European radio.

How will the money be used?

The principal ambition of Sous//Casques au Palais Royal is to familiarize a large public with contemporary forms of experimental music, using an original sound diffusion device made accessible in a national heritage environment.

We are kindly asking for your contribution to be able to realise two events in summer 2016 : two concerts taking place in the historical site of the Palais Royal.

With your support you also help Césures to strengthen its existence and to develop new partnerships for setting up a year-long program, starting in September 2016.

Your contribution will help us to:

- cover all of the organisation costs and to allow us to keep the entrance fees as low as possible in order to keep the event accessible for a large public.

The money will serve to:

- reward the eight composers for developing an original composition, presented and diffused on the occasion of the two concerts : 4 000 € (500e/artist)

- assure logistics for the two concerts (rental service for all material - sound, light and stage): 1400 €

- organise the catering and the reimbursement of the travel and transportation fees : 700 €

- organize seats and blankets for the public: 500 €

We are adding the commission amount to the profit of  KissKissBankBank (8%): 940 euros

We depend on your participation!

We also need your precious contribution to help us spread the information among a wider public. Please share the link to the website with all of your friends via mail or social networks!

In case that the funding surpasses the calculated sum all the supplementary funds will be distributed among the participating artists.

We count on you !