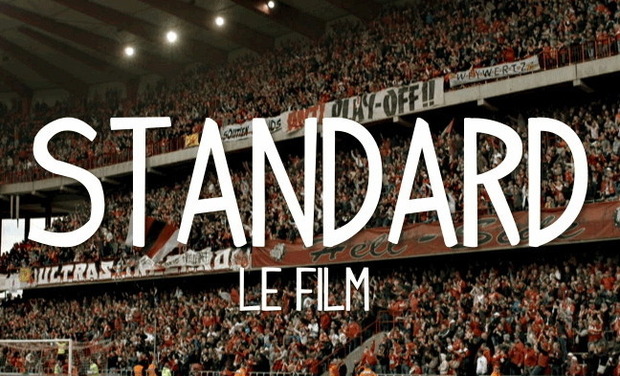 Playing soccer or supporting your club with your heart at the stadium, it’s a shared moment of life and transmission. But when the game disappears in favor of television show business, the social bonding becomes every day more solitary.

In Liège, the passion for the club Standard exceeds regional and linguistic boundaries; it federates beyond differences into a united group: the “Rouches”. The members of this large family of friends are very proud: proud of being red, proud of belonging to something larger and collective that exceeds them but to which they contribute, and that gives meaning to their lives.

In Liège, the days of the matches at Sclessin stadium this passion is brought to fever pitch. Sclessin is located in a unique place in the world, cornered in a loop of the river Meuse, in the middle of the steel factories that disappear without a fuss. And, now that times are hard, men, women and children keep coming to the stadium: paying their seat to support their team means really something to them.

STANDARD, the movie is the story of a passion to live every day, the fervor that helps the supporters to fight for the preservation at all costs of the soul of their club, holding high and strong as a flag of pride against the globalized football business. It’s the story of an “assumed naivety” (everyone knows very well what they go looking for at the stadium) that many do not understand. It's a story of joys and sorrows, of a community that struggles to continue to resist and exist. Together.

Standard de Liège has a unique family dimension. We often go to the stadium together as a family, because when younger we went there for the first time with a father or an uncle. There is among the supporters of Standard a fierce determination to pass on their childhood memories and to guide the youngsters in this large family.

Through the story of a few supporters, STANDARD describes this wish of transmission, this need and this pride of belonging to something indestructible that will be yet perpetuated for generations. The “StandardMen” are the guardians of the temple and will not give up their place to anyone, so that the soul of Standard keeps hovering over the stadium.

In 2008, Brieux Férot, producer and historic contributor to the French soccer’s culture and society monthly SO FOOT, is in Buenos Aires. He starts to write the everyday story, full of humor and humanity, of the supporter’s families from BOCA JUNIORS, the mythical and popular club.

A few months later, in England, he discovers other stories about supporters communities like that of the legendary club Charlton, which is: At the local elections in 1989, the supporters created a political party in order to get their stadium back, which a real estate developer wanted to demolish to build towers!

The movie will be a documentary about what unites the supporters of a mythical club that has evolved in a popular and festive championship, but which has missed the economic springboard of globalized football. This documentary will show an unrivaled fervor, a sense of celebration and solidarity, a visceral bond to a club. It’s a documentary about the attachment to values that transcend, beyond regional and linguistic communities, the Walloon, Brussels or Flemish affiliations, to form a family.

Not Walloons, nor Flemings but Rouches, Standard de Liège supporters.

STANDARD, the movie was born.

So, Brieux talks about this project to his friend Benjamin Marquet, film director, which takes it over. Both of them put the finishing touches to the project and start looking for a producer. They manage to convince pretty soon the production company from Liège Tarantula and the French company Groupe Deux, which was already the producer of Benjamin’s second documentary “Lads et Jockeys”. RTBF joins the project as well as a film sales company Doc&Films. The budget and financing is initially calculated for television only. In November 2012, Benjamin moves to Liège with his partner and sets to work.

A year and a half he spends in total immersion to live at the heart of the Rouches and penetrate the soul of Standard.

He has pale eyes, the face tanned and a craggy look, a diamond-tipped ear and a warm voice. Spruced up, Francis has walked around Sclessin for forty years like a modern cowboy. Francis does not have a guest room anymore: he turned it into a museum, the largest private museum dedicated to Standard de Liège.

From Brussels, Nadine is an accounting professor at ICHEC, a prestigious business school. Nadine has not missed a match for 44 years. A very discreet person in civilian life, she is transformed from the moment her team plays. Every goal Nadine goes in a split second from total anxiety to the most explosive joy. And if the Standard supporters sing “Brussels, Brussels we f*** you!” she knows that it is not meant for her.

Chris is the leader of the metal band DO OR DIE. In his group he is the only one who loves soccer. It’s complicated when they have to work out the rehearsal and recording schedule according to the matches from Standard. Chris has three daughters. Lili, the middle child has been taken with her father’s passion and goes with him to the stadium at the earliest opportunity. She has become a passionate expert. Every match, from the grandstand T3 that she considers as home, that Lili shares intense and privileged moments with her Papa.

Sébastien is the biggest Standard supporter, but also in Belgium, holding the record of matches attended from the same club, over 2,000 matches as of now. He has been in every trip in Belgium and in Europe for over fifteen years. The only one he has missed was that of Belgrade because of a non-procured visa. Today, suffering from a serious illness, he can’t go to the stadium anymore. No big deal: Amandine and Junior keep going to perpetuate the family tradition and vibrate like their father who taught them that they could cry for their team.

At Standard there are two Ultras groups: the PHK and the ULTRAS INFERNO. We discover with them a commitment at every moment. Being ultra is working day and night to really blow the whole world away. The gigantic banners unfolded 3 minutes at the beginning of every match represent to every one of them a 1,000 hours’ work. The 90 minutes of non-stop singing have to, on one hand motivate the players, and on the other have the adverse ultras shut up. Being Ultra is being a part of a friends circle, united, determined, and completely dedicated to the club.

The best of dOP, maybe the greatest French band of the moment, is written there!

The band dOP – three quite fine guys – has already worked with director Benjamin Marquet, composing the soundtrack for LADS & JOCKEYS.

What's their defining feature? To collect improbable instruments to reinvent the genres, in a very personal, enthusiastic and generous way. It’s an experience to live, a cross between techno, house, jazz and classical music. Nothing less…

Who are they? They are talented performers who have the defining feature of reinventing themselves in every concert, offering a completely unprecedented show in every new encounter with their public, which gets larger week by week.

Clement, Damien and Jonathan are kind enough to give us an exclusive concert in Liège. It’s among the gifts to choose as a priority of course…

November 2012: start of the shooting

December 2013: end of the shooting

February 2014: Start of the editing

March 2014: presentation of a film excerpt during a workshop organized by the “Sport, Literature and Cinema” Festival at the Institute Lumière de Lyon.

June 2014: Delivery of the CINEMA version, ready to travel…

From September 2014: festivals all over the world…

Sound Engineer: (to be completed)

After 3 years of preparation and shooting, the greatest documentary about what it really is to be a football supporter, is on the verge of being finished.

Why are we doing this collect and all of these crazy surprise gifts?

We have succeeded at financing a 52 minutes TV version, intended for television, but taking into account the richness of the topic, we would like to offer a longer version of 90 minutes that allows us to make a real film, a creative documentary in CINEMA version. What’s our goal? To give visibility to the rouches’ soul and to the values of Standard in festivals around the world, and maybe benefit from a theatrical release…

So the collect will allow us to:

€ 25,000: to make a longer CINEMA version with new editing (image and sound) and new mixing…

€ 15,000 extra: make a trailer, an advertising brochure, and communication materials in different languages that allow the film to travel…

The more money we get to collect, the more the film will travel and allow the “Rouche” culture to cross the world…

How far will we go? It all depends on you!

All together we can make great things. We are very close to the goal: a huge thank-you for your contribution to this huge adventure.

Choose a gift, get the one that you like the most, and here we go!