Embark on an incredible adventure, from of the imagination of a field photographer passionate about encounters and adventure. 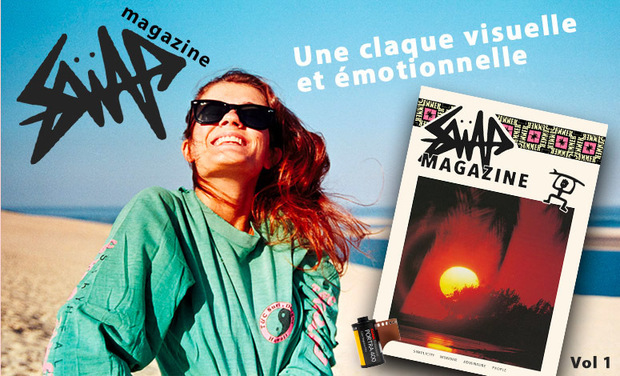 A book emotionally charged, that takes you on an incredible, aesthetic and sensory adventure.

An upscale magazine containing a clever mix of all that life has to offer:

Travel, meetings, discoveries, galleys, lifestyle, guests, dreams, aesthetics ... Shake it all, you get an explosive mix.

A real feast for the eyes and the mind.

A magazine printed like a table coffee book, an object that reads and preserves itself, that shows itself, that collects itself as the witness of countless encounters and escape. Served by an elegant model, shifted but very neat. Pleasant to read, airy, with an original graphic charter upscale. A square back sewn and a large pagination. More than 172 pages.

My name is Tom « Summer » Massiet Du Biest, I was born in Ivory Coast and I'm 29 y.o.
Participating in many transcontinental expeditions from my childhood thanks to a globe-trotter father, I acquired quite young, a solid experience of travel, as well as skills such as adaptability, perseverance or cold blood. Even today, I continue to learn from my encounters, travels and other adventures and totals for now, more than 55 countries and states covered.

I was quickly drawn to the power of photography. Being able to immortalize a moment of life, an emotion, by a "simple" button press ..  You must admit it's pretty cool right?
At the age of 14, I made photography, a fixed idea. I want to be one of those who travel the world, looking for images to transmit today and bequeath to the generations of tomorrow.  I leave school, which teaches me nothing compared to my travels (I have a very understanding mother) and devote myself solely to photography. At 16 I get my first publications in an extreme sports magazine and a little over a year later, I realize my first photo assignment abroad. Since then I have been published many times (magazines, dvds, books and photo exhibitions) in France and abroad. Despite some bad payers and some bad experiences in this rather particular and changing environment, I never gave up or down my pants. I still love my job and I continue to work by focusing on quality rather than quantity.

Why "SWAP"? Because we are all inhabited by a desire to escape in a world in crisis, which is facing many problems (energy, environmental ..) we are all filled with disappointments. Without ignoring the problems of our world, we need positive energy.

It is not trivial that today we are crowding on social networks to connect: we are inhabited by this need to reach « the other ». However, doing it behind a computer screen is not enough and this magazine aims to make those who can go out, to explore the world around them, and those who can not or not anymore, to do it through these words and pictures. Even if it is particularly aimed at image enthusiasts and travel buffs,  everyone will be able to find a subject or a character in which to identify themselves and will enjoy browse this adventure with fingertips to travel through these visions of share and carefree. You will appreciate this momentum of positivity and open your eyes to others, meeting after meeting, page after page ...

A motivation born of the annoyance of the « all digital ». Remember at the old Family albums? At this time (not so long ago), we made fewer images but each shot was thoughtful, neat. Consciously or not, we were all paying attention to the photos we made because with film, taking anything and everything was just not possible. Since they were rarer, each image had value. Printed and then grouped into photo albums, so we could touch them, take them out and handle them; there was something physical that linked us to our images. Today, almost everybody own a digital camera or a smartphone, the picts are taken at an incredible pace without worrying about the number of poses, we pile thousands of images that are no more than very sophisticated algorithms in hard disks or on our computers, but because of their ridiculous number and the ease with which we take them, they lose importance. We do not see them as much as before because there are too many, and they end up forgotten in old computer files.

To make this magazine already atypical, totally unique, the vast majority of images will be made in film, using good old 35mm rolls. «SWAP» is not an article that you have scrolled on your computer screen between two youtube videos, it is a beautiful object that you will want to show, keep.    You’ll SHARE it!

The originality does not only come from its content, but also from how it will be told. SWAP is a "personal magazine", and like a diary, you will not overlook topics that are meaningless with unbiased objectivity but you will plunge into my adventures and read what I felt in front of such a landscape, laugh at the circumstances of an encounter or sympathize with my galleys. So you will be a part of the trip. and this book will be at the image of life, loaded with emotions.

Why using 35mm film?
Because life is not made of 1’s and 0’s.
Everywhere in the world new shops are opening up, specially dedicated to film (http://www.richardphotolab.com, http://www.alkit.com/film-processing, https:// carmencitafilmlab.com etc..). far from having disappeared, films are coming back in force (new films have been launched on the market such as "cinestill" for example, Kodak has also announced the return to production of the legendary Ektachrome).
It is a niche market certainly, but more and more revalorized, just see the return of film in the shelves of supermarkets, the craze for "instax" (the new Polaroid launched by Fujifilm a few years ago). Think about it, we spend our time using photo filters on our smartphones, supposed to give a film look to our images.
SWAP has for ambitions the sharing, the discovery and encounters. Realizing his images with film is perfect for this because it encourages a certain vigilance, cause each image is precious. It's a good way to rediscover the world, and to reconnect physically to our environment and people.

« No time for the devil»  A search of happiness

A first opus with a strong subject. A reflection on the definition of happiness in Costa Rica, the country of happy people. Through the opinion of people crossed on the way (local or foreign) and my personal thoughts, I would try to draw the portrait of happiness.
Of course it will not occupy the 172 pages of the book, you will also find "guests", portraits of all kinds, breathtaking landscapes with their gps points ... But also a making of part, showing how I realized some pictures as well as photo tips and even a section « readers corner » where you can have the chance to be published by sending your most beautiful pictures accompanied by their stories or anecdotes.
Every text will be translated in French and in English.

August September:
Walking expedition all over Costa Rica. Realization of images and articles

October November:
Printing the first 300 copies of the mag

November December:
Delivery of the first 300 copies of the mag! Merry Christmas!!

WHAT WILL THE MONEY BE FOR?

It will finance the fees of the expedition (housing, food etc ..), a part of the material but especially the films and their development as well as the expenses of the print of the magazine.
But no worries, I do not intend to get paid for a holiday.. This project fascinates me, and to carry it out I will have to "get wet". Indeed it is not by rolling from hotel to hotel that I will meet people and bring pictures of unusual places.

It’s not gonna be easy everyday, in fact it’s gonna be outright hard.  I will climb volcanoes (some more than 3700m), progress in the jungle and sometimes by night, in the rain or under a blazing sun. I will have to lug my photo equipment in addition to the usual equipment (clothes, sleeping bag etc. ..). I would travel on foot and hitchhiking (or by car, everything will depend on your contribution)!

My goal is 15 000 €  With this sum I would be able to finance a 40-day walking expedition in Costa Rica and produce the mag in its entirety (I would realize myself the model to reduce the costs).

I, Tom "summer" Massiet of Biest, will reveive the integrality of the money so that I can realize this magazine which, I hope, warm your hearts and boost your dreams.

IF I EXCEED MY GOAL

I will launch SWAP clothes.
80s/90s inspired designs on high quality 100% cotton t-shirts not made in China.

The more the objective is exceeded, the better I could realize my vision and the more I could print copies of the mag. I sincerely hope that this project will fascinate you as much as me and that you will not forget to send me a picture of the magazine dragging on the table of your living room when you receive it! ;)