Bookniarof the cookbook to concoct a funfair, attractions, fighting ... all revisited with the special sauce Eniarof 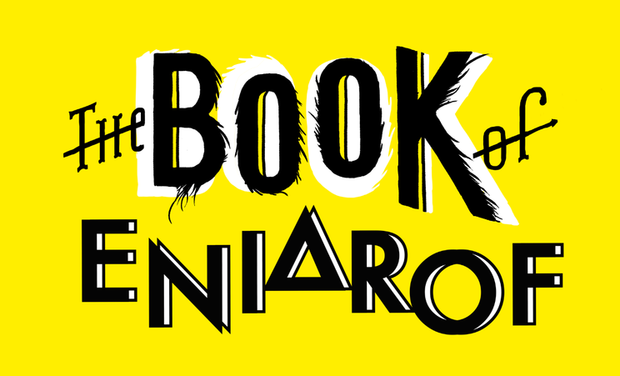 Do you already know everything about Eniarof ? ⤷ See you in paragraphe 2 !

You don’t know a thing about Eniarof! Do you? ⤷ Then see you in paragraphe 3 !

Do you want to know all the story of Eniarof ? ⤷ Then see you in paragraphe 4 !

What we’re working on?

After enjoying our 13th run of Eniarof, it’s high time for us to leave our mark in History! We’re preparing a bilingual (English/ French) limited edition book. It’ll be something between a catalogue and a fun and pedagogical tool, a retrospective on the last 13 Eniarof events and a manual to help create new

It will contain the founding Eniarof dogma, interviews from Annick Rivoire (journalist for Poptronics) with important personalities from the a world of contemporary & digital art such as Régine Debatty, Nicolas Nova, Etienne Mineur, etc …who each give us their personal interpretation of Eniarof. The book will also feature stunning photographs from Manuel Braun(artist & photographer for Liberation and Le Monde…) as well as a detailed description of 20 of the most important attractions, explained by their creators (Douglas Edric Stanley, Antonin Fourneau, Raphael Isdant, Jankenpopp, Monsieur Moo,…) in the shape of technical sheets towards the end of the book. This limited edition of the book will come with a set of cards working as an addition to the “instruction manual” final part of it. As a playful vector of ideas, they should facilitate the process of inventing new attractions & brainstorming sessions.

All in all, something to look forward to!

If you’re new to Eniarof !

Eniarof is a reinvention of the funfair where the concept of the attraction becomes an excuse for art. The creators of each Eniarof take their inspiration from popular culture, ancestral and new, obeying the rules of the “Dogmeniarof”. Karaoke, Lucha Libre, video games, art installations, performances, gory films and curiosity cabinets can all be found on the jolly & unprejudiced grounds of the Eniarof funfair. It’s an ephemeral & multi faceted creature of a place, one often defined as “This thing is called Eniarof”... It was dreamed up by Antonin Fourneau when he was still a student at Aixen- Provence School of Art. But from a student’s final project, Eniarof rapidly grew into a brand, one very much in demand from festivals in France and abroad, with an ever growing number of artists collaborations. In 2013, as Marseille Provence is European Capital of Culture, Antonin returns to the birthplace of Eniarof spending 2 weeks of preparation at the Aix-en-Provence School of Art for new explosive evrsion of the fair…

⤷ Now you know all this, you can go back to paragraph 2!

It was in March 2005 that first Eniarof born under the impulse of Antonin Fourneau student of the Hypermedia lab of Douglas Edric Stanley  at thé school of art Aix-en-Provence. A group of students from different artistic sensibilities decided to develop in 2 weeks a carnival gathering twenty attractions. The public was able to see for the first time this experience with multiple and new kind of interactions. On the menu: a racing game of mouse generate VJing, a punching bag to zapping in webtv, an arcade revisited machine Tequila human Paf, a man looking TF1 (french tv channel) non stop for 48 hours, a man trapped in a coffin with a lot of snails .....

Following this first experience emerged an informal Dogma said Dogmeniarof a series of rules to make an Eniarof . And in december 2006 a second Eniarof was born under the overall leadership of the art school of Aix -en- Provence delighted to repeat the experience . A second Eniarof was an opportunity to invite others contributors to further the creative madness of the project. A group from Belgium proposed to organize a military camp making cookies while on the other side a group of students from ENSAD Paris came to partcipate with the Aix -en- Provence students. This gave rise to the appearance of the famous wheelbarrow Tuned , a teddy bear insulted you when you start the fiddled too much , " Immortal Kombat " a policy boxing and the CuicuiBox a concert hall cardboard 2x2x2m to accommodate the many people as possible to collapse !

The famous Cuicuibox that ending in crumb, a proof of its success.

ENSAD students in work in progress

one version of the famous «brouette tunning».

« Immortal Kombat » a political struggle of another era.

In the summer of 2006 following an article in Libération "Nouvelles lois de l'attraction"  and word of mouth, few festivals became interested in the project and want to welcome it as a white card. In September 2006 the first festival "Emergence" at Villette Paris offered an overboosted sauce of Eniarof. Where the audience was guest to dance on the famous "tuned Wheelbarrow " and move in "Cuicuibox" or furthermore enjoy to play with  electro groove of the "mashup machine" by Jankenpopp.

first appearance of HyperOlympic which return regularly in futur Eniarof.

A few days after the arcade game 4 Eniarof opened during Arborescence festival in Marseille with a series of hijacked arcade game "Donkeykong blackout" in which every time you press the B button on the signal TV  jumped, "Streetfighter 2in1" where you could control the two players with the same handle, "duckzzzzz hunt" game Duck Hunt shooting screen with an additional penalty constant scanning of the screen and "too much Mario mushroom" a version of mario game where the elements of the game were reversed.

« Street Fighter 2in1 » or how to fight against is yourself.

the « arcade game Eniarof 4 » after 3 nights of festival.

In July 2007 the collective Ottoprod invited in Maribor a convoy of Eniarofer to achieve an Eniarof 5 AKA "SlovEniarof." The opportunity to perform in two weeks mostly new attractions including the famous "RR"  headbanging simulator or "charcuterie brilliant" revisiting the traditional hotdog eater championships .

« RR » you wear a wig to control the volume of sonor hardrock.

and a short video of the event:

In September 2007 the festival Emergence guest again the Eniarofers for 6th edition, an awesome edition where the public had to calm down in order to avoid to cover all the sound of  concerts in the festival. Present on the spot  "Hyperolympic", "A battre" and many others ...

« A battre »when a Tekken party become an improvisation of duo drummers.

In 2009, further in the north, at Maison Folie Wazemmes Lille to celebrate its five years of existence invited a 7th version Eniarof to occupy the buildings. The opportunity to present the best of Eniarof and some new idea as :  «Eggregor8» a Pacman with 8 players in same time.

« Hyperolympic » a slab rocking sprinter device as if you were there on the tracks.

« Eggregor8 » in which 8 players try to control together the same Pacman.

The « CuiCuibox » that end as usual in crumb after a real success.

and this was the opportunity to travel with a special wheelbarrow as wedding gift of our two lovebirds of the CuiCuibox :

the wedding wheelbarrow crossed the Manche and customs control.

Third edition, which took place again in Aix-en-Provence in March 2009 and 8th Eniarof since the beginning of the adventure in 2005. The opportunity to present essentially new attractions which are:

« Busherie » tribute to a News about a shoe and a president.

« sushiMania » a dance video game with a real punk band Japanese and sushi earned in proportion to your score.

Work in progress some test on the keyboard of  « frenchCanCan jukebox »

In March 2009 and 2010 are linked consecutively a Eniarof 9 and 10 at the festival kontact sonore Chalon-sur-Saône gathering some of bestof Eniarof as "Hyperolympic" and "RR" while mixing in some new features such as :

« Domoludens » or how to play a video game without display but with its appliances.

« Mexican StandOff »  fight in « counter strike » where the most concentrated shoots the first.

« Super Tetris Adventure » or how to move Tetris boxes with the command line.

In 2010 the " espace 13-16 " of Beaubourg invited several artists with attractions created during previous Eniarofs. Some people close to the project asked why Eniarof was not announced. We say that it was a Eniarof Off AKA BeaubourgNiarof .

A beautiful Eniarof 12 where the city of Poitiers invited us to occupy the Park Blossac close to the normal Christmas Funfair. The opportunity to invite students from the art school in Poitiers to hijack the playground equipment for children in the park during a workshop entitled "augmented Playground."

« Shooting in the rain » shoot as Al Capone on an eighties famous game.

a butterfly simulator result of the workshop « augmented Playground ».

Finally the 13th Eniarof in Aix-en-Provence for MP13 in November 2013 which regrouped several students of Aix-en-Provence, HEAD Geneva and FAI AR-Marseille. And a group of new Eniarofer came to join old Eniarofer.

Thanks to the Marseille-Provence European Capital of Culture 2013 funding,

we already made an Eniarof in november and will go towards the initial work of writing,

graphic design and numerous illustrations of the 260 pages. We’re also

hoping to fund part of the printing with it.

Gathering an extra 15,000 euros will allow us to foresee a more glossy finish

and better binding for the book. Add the “Design Poker” card game and a website

it). Furthermore, if we do end up with more cash than we hoped for, we’ll be

The Wall of FameNiarof pack = Your name on the Acknowledgements page of the website.

The LikeNiarof pack = Your name on the Wall of FameNiarof in a nice typo in capital letters ! + 1 Sticker

The FashioNiarof pack = the previous batch + color printed bag of Eniarof. [Visit the Facebook page from January to select the visual with the Lik'o'meter]

The GamerNiarof pack = the WarriorNiarof pack + An game arcade Eniarof in wooden palette. containing 60 retro video games. Delivery estimate based on the location of the buyer.

The GangstaNiarof pack = the WarriorNiarof pack + Eniarof wheelbarrow with big sound system special edition 2013 made ​​by Mr. Moo (www.monsieurmoo.com) - Narrow and deep Fund, through all doors, subway, trains, ect. - Comfort ride thanks to its wheel mounted on ball bearings - Bi-material handles - Custom paint by DBD Design - Bluetooth connection - 4X2 channel - Amplifier 2000Watts - Sealed deep cycle battery (autonomy 10H bullet) - DC input for charging. Handover to Aix-en-Provence or Marseille. For others destination of delivery an addition amount could be estimate based on the location of the buyer.