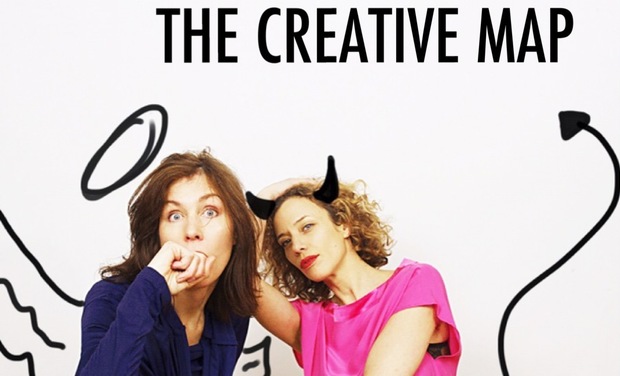 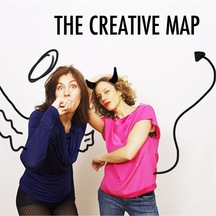 In a fun and original way, a person or duo guides us through their city, sharing insider tips, great addresses and favourite spots.

In the shape of a poster, The Creative Map, at the same time a tourist and artistic map, introduces us to a city, its inhabitants, artists and a multitude of addresses.  The first issue is Brussels! The Creative Map is an artistic and graphic object, an original project stemming from the encounter between a photographer, Cici Olsson, and a singer, Marie Warnant, both living in Brussels,  who, for this first issue, wanted to shine the light on their city.   In the guise of an LP - 33 rpm vinyl record - poster, the Creative Map contains over 80 useful tips, 60 places to discover, a 2 hour musical playlist, 50 photos and a spirited layout that will appeal to people enamored with the city, tourist and residents alike. Useful and fun, this artistic object is by essence multi functional.  Bonus : 2 original songs by "Girls just wanna have fun".

2) A sticker with the summary of the contents

3) A poster/map printed recto-verso, with the map and addresses on one side and the photos on the the other.

4) A carton incorporating the list of all places, addresses and useful information.

+ a bonus of two exclusive songs.

The Brussels Creative Map will be officially launched, with a showcase and release party, at the Hôtel du Berger, on September 10, 2015

Be part of it!

Join us on our Facebook Page "Girls just wanna have fun" !

BUT WHO ARE "GIRLS JUST WANNA FUN"?

Cici Olsson is a Swedish photographer who - after several years on the roads in Africa and Asia, shooting for magazines, aid organizations and high end tour operators - decided to settle in Brussels in 2004.

In 2009 she co-founded the publishing company Sh-Op Editions and co-produced several books on gastronomy, such as the series "MANGE". While specializing in portraiture, Cici also shoots fashion and contemporary performance art with a soft spot for theatre and music.

She loves to work with musicians and artists

On a freelance basis she collaborates with several national and international magazines such as the ELLE, Vanity Fair, Victoire and Paris Match. She enjoys teamwork and entertains long term collaborations with hat maker Elvis Pompilio, model Hannelore Knuts, the National Theatre of Brussels and the Thalie Art Foundation.

This summer she's participating in the exhibition The Belgians - An Unexpected Fashion Story at the Bozar Brussels.

Currently she's working on a personal project entitled « The Stories of My Dreams », and, within the frame of the Creative Map project, she will moonlight as a singer with the help of Marie Warnat and Dim le Brun.

After a first album in 2005 "De un à Dix" widely praised by the press and the listeners, Marie Warnant, author-compositor,  released "Ritournelle" in 2010 and "Nyxtape" in 2014.

In 2015, she released "Make Love", an EP (limited edition vinyl) containing 4 variations of the same song.

An extract from the "NYXTAPE" album, the song Make Love was remixed by DJ Dim le Brun and TITLE

In collaboration with hat maker Elvis Pompilio, Cici Olsson shot and conceived the cover of the EP Make Love by Marie Warnant.

On stage, Marie Warnant wields an electric guitar, a sampler and a keyboard, and she fiddles with green fluorescent audio tapes. Elegantly she has demonstrated her talent and originality, both solo and in band.

In 2014, at a St. Vincent concert at the AB she runs into Cici Olsson and asks her to shoot the press photos for her NYXTAPE album. A beautiful friendship and artistic complicity was immediately established.

Directed by Cédric Havenith, Cici made an appearance in the music video "EXIT", the second single from NYXTAPE.

Following a noteworthy happening at the Berger Hotel in November 2014, Marie Warnant invents the "Make Love Tour" to promote the EP Make Love. Accompanied by Cici, who documented the tour in photos and videos, she played for 24 hours non-stop in 16 legendary places in the Belgian capital. An around the clock performance that served the "Girls Just Wanna Have Fun" as a takeoff point for the Creative Map concept, a convenient and fun guide to cruise Brussels via its most alluring addresses.

On several occasions she has put music to the shows of fashion designer Jean-Paul Knott (Paris, Brussels, Tokyo). They created together a t-shirt collection "LOVE4EVER KNOTT".

In spring 2015, she co-wrote the single "Les Femmes Sont Là" with the Belgian rap artist AKRO.

She is also working on a musical comic strip for children that will be published in autumn 2015.

The "NYXTAPE" Tour was completed in May 2015 in Vietnam.

Marie is currently recording a two song EP with Cici Olsson and the Dim le Brun that will accompany the Creative Map.

A base amount has already been invested to create the "Creative Map"   - Research and creation: 500€ - Graphics and Photography: 1000€   Initially, the "Creative Map" will be an exclusively physical object,  a limited edition print (500 copies) mixing photos, drawings, illustrations,  text and collages. We are also working on the development of a website.

The KissKissBankBank funding will cover :

Any amount surpassing the 3000€ goal will cover initial expenses linked to the creation of the Creative Map, and furthermore be invested in promoting and developing the The Creative Map project in the media (a website etc) and serve as a take off for future issues of the Creative Map (other cities, other people).

Super Surprise by a great artist…