" The Mind Dragon", a comic strip about Plum Village

Act now to help us realize an inspiring and transformative comic strip ! 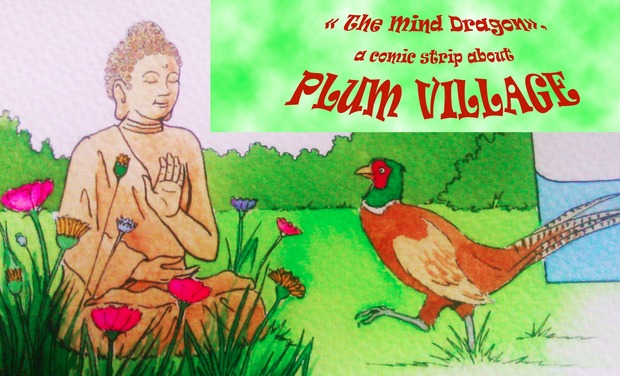 " The Mind Dragon", a comic strip about Plum Village

Act now to help us realize an inspiring and transformative comic strip based on the mindfulness practices taught in the children’s program of Plum Village: “The Mind Dragon”.

This comic strip project arose  during the Summer Opening Retreat of 2016, at the end of the children's program in Plum Village (a Bouddhist practice center in France, where thousands of people come for mindfulness retreats every year).

At this time I created a treasure hunt with Brother Phap Luu and the other volunteers who played magical characters to help the children on their way. This game became soon "The Dragon Quest", which encouraged kids to practice mindfulness together in order collectively to heal the old and sick Dragon.

The children were so  enthused by the adventurous exploration of the game, where they would look for gathas to recite (short poems inviting us to be mindful in everyday activities), or songs to sing joyfully, until the Dragon finally appeared, that the game was repeated week after week, and the following year also, for the great enjoyment of all.

The purpose of this book is to create a work of art to extend the magic of this particular moment, and to teach  children how to live mindfully with joy, sisterhood and brotherhood.

The characters of this story are all inspired by people present at Plum Village during the Summer Opening Retreat of 2016. It is a great happiness for the members of the Plum Village community to be able to recognize the brothers from Upper Hamlet, or their own children, or lay friends, as well as symbolic places and items (bells, yurts, calligraphy, lotus flowers...) well known to us all.

On this video, you can see Brother Phap Luu and I, presenting the project in front of all the community present this day of january 2017.

For people who don't know Plum Village yet but would like to offer to themselves and to their children the possibility of a joyful and natural life in mindfulness, this book can be a good way to start.

And who knows, if it may give them the aspiration to discover Plum Village, visit us and take time to get to know us more. They wouldl be welcome!

One last thing about this story: we also have the idea to create many other books linked to the storyline of this comic strip, including one long story to take place in the sisters' hamlet with children and their parents, in order to present important practices like Beginning Anew, the practice of bringing joy and kindness into the family. We also are planning a series of short children's stories showcasing each of the different speaking animals of "The Mind Dragon".

"The Mind Dragon" will be published in two parts made like this:

1- Not achieved : all the participants are entirely paid off and nothing is printed

500% and more : translations in other languages, and creation in the over 5 years of many others children's books and comic strips about PLUM VILLAGE and the practice of mindfulness, still inspired by Thay Phap Luu:

- A graphic novel of 50 pages including the sisters and the parents, untitled "The Lotus' Secrets", and continuing the story of "The Mind Dragon". This graphic novel will speak about family practices as the Beginning anew.

- A set of 8 children's books, between 20 and 30 pages, telling the story of each animal present in "The Mind Dragon", and each of them embodying a value and a teaching from Plum Village.

- A children's book, between 20 and 30 pages, telling the origin of the Mind Dragon, who should be borned from Thich Nhat Hanh's breath, when he had the aspiration of becoming a monastic.

The company AILAIME EDITIONS (a publishing house) will perceive the full payment of the fund raising.