Initiated in 2010, The Planet Diabolo Project is an adventure which aims to introduce the diabolo art to the world through some exclusive video content. Recorded on 5 continents in more than 2 years, this project has brought together more than 100 artists from very different styles and origins. The final result will be released on a 4 thematic DVDs collection including: the freestyle movie "Diabolo is a trip", the educational part "Diabolo is a skill", the performances section "Diabolo is a show", and the bonus mix "Diabolo is more". Official website: www.planet-diabolo.com. 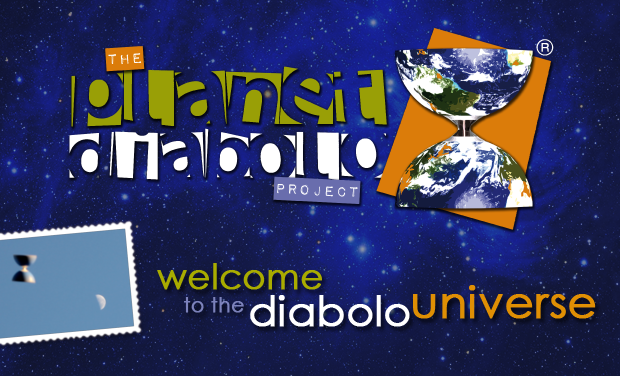 Nico Pires received his first diabolo as a Christmas present at the age of 9.

Half French, half Portuguese, he always has been interested in other cultures and dreaming of travelling around the world.

After studying Management and Communication in France, Nico decided to launch his website Diabolo4life.com and to start living on his passion for diabolo. He started performing professionally in Hong Kong in 2009.

Passionate by video and travel, he always wished to combine those interests to his love for diabolo.

It's during his stay in Asia, land of the diabolo origins, that he found the inspiration to launch The Planet Diabolo Project in 2010.

Very quickly, he was joined in this adventure by two other French diabolists: Priam Pierret and Thierry Delaveau.

Professional diabolist since 2004 and director of the famous Diabology DVD, Priam Pierret dedicates his life to the art of diabolo.

Priam started playing the diabolo in 1990. He created many tricks and put online his first diabolo website in 2002.

After placing 3rd at the World Diabolo Championships in 2004, he developed DSSS, the first diabolo simulator and created Diabolord, his stage character.

Priam teaches diabolo all over Europe, more than 500 diabolists already attended his course.

He joined The Planet Diabolo Project to manage the Performances DVD, and to bring his experience of Diabology.

Thierry on his side qualifies himself as “a professional diabolo spectator".

Known as Donald the Trekky in the diabolo community, this unconditional diabolo fan has been around juggling events for more than 20 years.

Thierry likes putting his energy in the promotion of young artists, shows and juggling conventions, featuring them in his well known online videos.

Thierry joined The Planet Diabolo Project in order to bring his passion for diabolo and sense of detail. He is especially in charge of the educational content of the project which will be featured in the Tutorials DVD.

HISTORY OF THE PROJECT

In summer 2010, the project was presented to many diabolo artists from all around the world on the forum Diabolo.ca, the international online reference of the diabolo art.

Our artists were approached because of the diversity of their styles and origins and very quickly, their enthusiasm towards the project made it become more than just ideas and concepts.

As Nico was living in Hong Kong by that time, he started to travel around the Asian continent to record the first sequences of the project.

Diabolo has a very deep history in Asia as it was born in China almost 1 000 years ago. That is why it was natural for Nico to make a first stop in Beijing.

The Chinese capital city was the opportunity to learn in details about the ancient roots of our art through unforgettable visits of the Diabolo Museum and of some parks where elders are practising their skills every morning.

Malaysia and Taiwan were also on Nico’s route in Asia. Influenced by the chinese legacy, diabolo is considered in those countries as a real sport, with its own institutions, schools, and competitions. Some amazing sequences were recorded there with the TND and Ya Ping Teams in Malaysia, and the world famous MHD Crew in Taiwan.

In April 2011, Nico decided to take a year off performing to fully dedicate his time to the project.

While Priam and Thierry were working on the Performances and Educational sections of the project from France, Nico continued touring around the world to visit the artists and some amazing footage was recorded in Australia, Brazil, Canada, Portugal, Finland, the Netherlands and other places.

Breaking gaps between the different approaches of our discipline has always been one of the goals of the project. To reach this objective, some Asian and European artists were invited to meet and to share their skills in common sequences. Two unforgettable sequences came up like this, one recorded in Paris, and one in Hong Kong.

As so much amazing footage was now in our hands, we decided that the freestyle movie “Diabolo is a trip" should become more than just a succession of clips and a scenario linking all of them together came up.

Please have a look here for a further description of that scenario.

At this point, Priam had already been able to reach some of the best professional stage artists such as Tony Frebourg, Tr’espace and the Sharpe Brothers who all were very enthusiastic to feature their acts into the Performances DVD “Diabolo is a show”. This section will also show some emerging talents such as "Compagnie Triobolo", or Antoine Terrieux.

Thierry on his side was organizing the filming sessions with our artists for the Tutorials DVD "Diabolo is a skill", which will be the opportunity for the audience to learn tricks from a beginner to a confirmed level.

The bonus DVD “Diabolo is more”, will be mixing unreleased moments, interviews,  documentaries and other very special sequences.

The project is now in its editing and copyrighting process, and should be available for the audience in 2013.

The way is still long before that, but we are already proud of what we have been able to achieve along with our amazing artists.

We are also very grateful to all the people on our path who have been supporting this adventure, and we truly hope you would consider becoming one of them.

We really wish that the result of our work would make you discover the limitless possibilities of the art of diabolo… and inspire your own dreams!

Thanks a lot for taking the time to read about our project, please feel free to visit our official website www.planet-diabolo.com and to contact us for any information!

Talk to you soon!

Nico, Priam and Thierry for The Planet Diabolo Project.

Until now, The costs of the project have been fully supported by Nico, Priam and Thierry in auto-production.

- 10 000 € to cover the transportations and housing of the creators and the artists during the different shooting sessions around the world.

- 2 000 € in official clothing of the project for our artists, in partnership with the fair trade brand Tudo Bom.

Two big spots of expenses are still ahead of us:

Music is a key factor of quality in this project, as all the songs have been selected to bring the most intensity out of our images.

Here are some of the music artists we wish to feature in our project: Daft Punk, Bonobo,The Streets, C2C, Onra, Cesaria Evora, Flux Pavillion, The Flashbulb, A. R. Rahman…

Your donations would be mostly used to help us cover the costs related to the copyrights of those great artists.

Some organizations and companies have also been showing some interest to our project, but the terms of the partnerships are still being negotiated.