Help us finance TodiéFold, an innovative experience with maximum complexity that will delight the brain of paper, math, and geometry lovers. 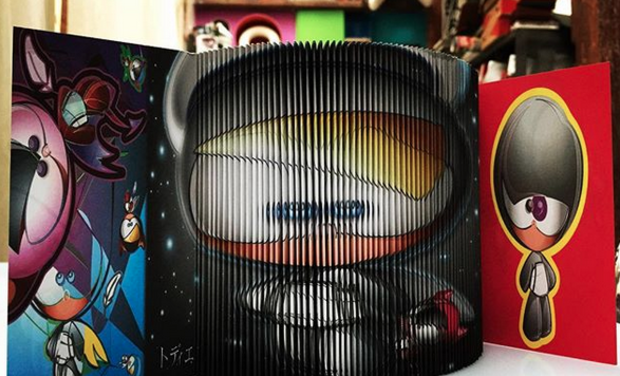 The TodiéFold is the result of intense geometric exploration conducted by Cristian Todié, a Romanian artist-sculptor-painter who has long been fascinated by the potential of paper to visually express the concept of space time and its potential for freedom.

It is a non-linear thought process that produced an algorithm that frees the image from the confines of a block of paper, projecting it into space.  This industrial process whose originality has been confirmed by an international patents combines the flat book: the scroll and the volumetric book: the codex, and transforms them into a spatial book, a veritable work of art.

The magic of this new object opens the mind to a new understanding of a special kind of geometry, that traces its origins back to the beginning of time.   By folding each sheet along the predetermined crease, an image progressively appears on the exterior fold, transforming into a TodiéFold.

For avid paper folders and paper lovers, this new object is appealing both for its playful nature and its beauty.  Folding and unfolding the book alone are both gratifying and relaxing, allowing the mind to wander, enjoying a stress reducing experience with this otherworldly geometric object.

The TodiéFold can be folded in several directions, revealing an surprisingly unexpected series of refractions and mirror images.

The repetitive and pleasant act of folding relaxes the mind and spirit while at the same time projecting the image in nearly three dimensions.

In the TodiéFold, beauty stems not only from the image produced on the exterior, but also in the way it uses the miracle of logarithms.

The Fibonacci Logarithm, a spiral essentially in nature, can be perceived in the superior surface of the Fold.

The TodiéFold team thanks you for your contribution and looks forward to launching this exciting new product.

With the 2000€ we hope to raise, this crowdfunding campaign will provide necessary funds to cover costs for a website and to develop proper packaging for the TodiéFold.

We hope this project will appeal to paper lovers, and with 4000€, we would hope to launch limited production of a Mini TodiéFold, a small handheld version of the TodiéFold displayed here and revealed at the Museum Connections trade faire in Paris in January, 2018.

With 6000€, we will add a limited edition TodiéFold to the print line!