Help The Walk to create their first album! www.thewalkmusic.com 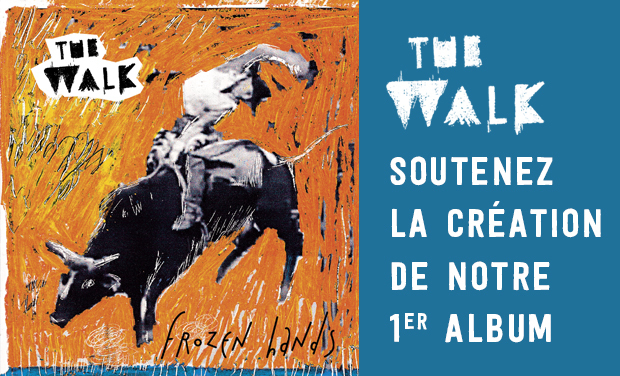 It's been 2 years now since we've released our first EP, 1STEP. Cheered up by our audience that we've met on stage in clubs, small theaters and also some bigger stages (Laiterie, Strasbourg, Festival Décibulles in 2013, Inouïs du Printemps de Bourges 2013) we've decided to create our first album.

We give you a foretaste of the album with Frozen Hands, 3 tracks released last may and also a new video right here:

We've got a lot of stuff to share but we picked 12 songs for the album.

After trying a lot of different ways to record (in a studio, a living-room, a shower...) we chose to make this album on a stage that we know well, the CIM in Bar le Duc, a music school and local stage where we've recorded our first EP.

So here we go for 2 weeks of hard work in october with our sound engineer who follow us since the beginning.

And here you come, helping us to produce this nice project.

As well as an infinite joy for being part of the creation of our album you will gain access to some exclusive stuff (limited edition of Frozen Hands EP, album preview and others sweet treats...)

The album release is in february 2015.

It will be used for the costs of the recording, our sound engineer's wages (recording and mixing), the print of 1000 cds with original artwork by a graphic designer and also the usual fees linked to every phonographic edition.

We will have to take care of several other things like mastering (last step of a recording), the print of T-shirts and other goodies but also the postal costs for the album or the wages of a webmaster for our website for example.

2000 euros for recording and mixing

So that's it! We would like to thank you anyway et we leave you with...music! See you soon!

We will thank you with gratitude on social networks.

For 10 euros we will gain access to The Walk's new album in a digital version (wav) and our thanks on social networks.

For 20 euros well, you got it! The Album! cd version + digital version + a signed poster and our thanks!

Here you got the complete discography of the band: our first EP 1STEP, Frozen Hands EP limited edition, the new album + signed poster, t-shirt and our thanks!

If you pay this price you will have the complete discography and all the little treats but it's the band that will bring everything to you and meet you for a drink! (only in Alsace, France)

150 euros... we will organise a private preview of the album only for you, with the whole band AND one of the band member will cook! (the good cook not the bad one! + complete discography, t-shirt, signed poster, and our thanks!

For this price Nicolas (tarhu) and Hervé (guitar-vocals) will come to your place for an acoustic gig! + complete discography, t-shirt, signed poster and our thanks! (transport costs and lodging not included)

This time it's the whole band that will come to your place for an acoustic gig! + complete discography, t-shirt, signed poster and our thanks! (transport costs and lodging not included)

You've reached the top! If you've decided to pay this amount The Walk will come to your place with all we need for a big great concert! You and your neighbors will remember it! + complete discography, t-shirt, signed poster and our thanks! (transport costs and lodging not included)