A human and architectural adventure in the southern most Europe 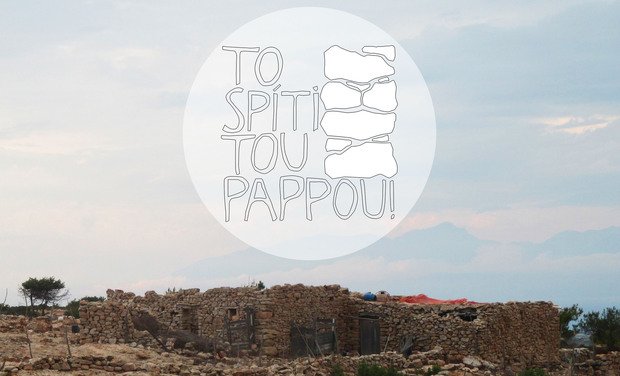 To spiti tou Pappou, the house of Grandpa.

To spiti tou Pappou is a Mediterranean story, a family story about gathering and meeting newcomers.

Pappou used to live in a small island in the far reaches of Europe, an island fluttered by the wind, cut from a block of rock and clay. A land full of thyme and juniper. Gavdos.

One day, just like his neighbours, Pappou left Gavdos for Crete. He has left fig, almond and olive trees. He has left his tiny stone-made house which has felt asleep together with the rest of the village...for more than half a century.

Years after, Gelly, his gran-daughter, has come back in the house to awaken it slowly. With the help of friends, she began the first works, followed later by us. People from all over the world who were willing to learn the forgotten building techniques: the ones that require the use of local materials: earth, wood, sand… Here is how the To spiti tou Pappou was born.

The To spiti tou Pappou project

When Gelly arrived in Ambelos, his grandpa's village, the project was only a personal approach, a family story...until she met Claire, a young Architect, in October 2013, and decided both of them to extend the project: that house was much more than a family story, it was meant to share human and ecological values with the highest amount of people. To Spiti tou Pappou has become a manifesto project.

To restore this house, we organise workshops opened to everybody, where participants will learn the traditional building techniques using natural materials.

The To spiti tou Pappou workshops are also the opportunity to share other know-how: ceramics, permaculture, music etc. in the wonder village of Ambelos. Beautiful but fragile: it is essential to pass on the idea of the fragile beauty of the island, of the whole Mediterranean. We think that everybody has to be aware of it and must take action accordingly.

The To spiti tou Pappou workshop of July

The workshop of July 2015 will be the opportunity to finish the main room of the house with a final layer. We will make natural plasters based on lime, earth and sand for walls and ground. We will also organise permaculture and ceramics courses.

This step is very important for us because it will be the opportunity to finish the main room. Then, it will be easier to comunicate about the restoration  in order to show that someone can really build seriously with the traditionnal techniques which respect the local contest.

The house of Grandpa, to spiti tou pappou, is located in the village of Ambelos, on Gavdos island, in South Crete, Greece.

Architects with expertise in natural materials. We all share the same passion for the earth material and the Mediterranean.

Active architect for 5 years, she specialised in building with natural materials and especially in earth architecture. In October 2013, she went for the first time to Gavdos to meet Gelly Kallinikou, the owner of the house in Ambelos. Together with the support of the Cretan Association Piliko (http://www.piliko.gr/) she started the To spiti tou Pappou workshops:http://tospititoupappou-gavdos.tumblr.com/.

Architect since 2009, she specialised herself in 2012 in the earth and lime plaster. In 2013 she created  TecERRA Earth and lime plaster (http://tecerra.weebly.com/). This project is born from the wish to explore the earth material as a potential of ecologic, cultural and artistic development.  She dedicates her time to exchange during workshops and seminars and improve her specialisation in natural plastering for traditionnal and contemporany buildings.

To make this workshop come alive, we will collaborate with:

- the owner of the house, ceramist, Gelly Kallinikou

To spiti tou Pappou is a project fully run by volunteers. With the human and ecological values that it brings, it seams to us obvious and fair to make the workshops opened to everyone and almost free. So we decided to ask a very small contribution to the participants that covers only the rent of a common space to store our belongings and the cost of clay for the ceramics workshop.

This collect will help us to finance the rest of our expenses that the owner does not cover, in order to offer a qualitative service that goes with the quality of the project.

Your help will allow us to finance our long trip to Gavdos island, starting from the city of Grenoble :

To ensure the highest level of training, we need to buy a range of professional tools that we are still missing to complete the restoration of the house.

On the site, the owner of the house will organise for the 25 participants a free meal and a nibble between meals per day, for 10 days. This collect will help her financially by 30%.