Vinyl stories and african chit-chat... "Togo Soul 70", the documentary of an african soundtrack 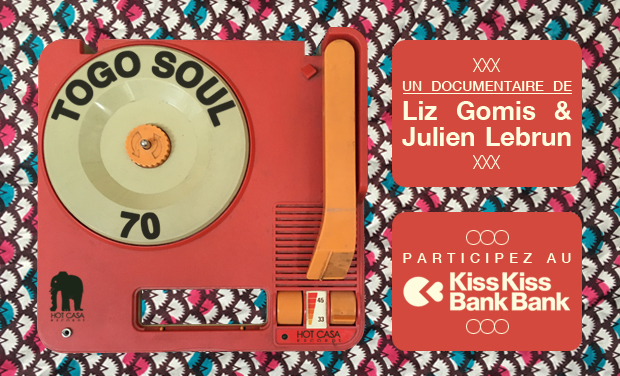 Hot Casa Records, the independant label specialized in Afro soul and Tropical Funk tunes, is coming back this year with a brand new double vinyl project: TOGO SOUL 70. And this time, we'll bring a camera with us to show you the "behind the scenes" of this post-colonial soundtrack by interviewing the ones who made that 70's afro sound.

Republic of Togo gained its independance in1960. Despite a complex political context and authoritarian regime brought by General Eyadema in 1969, the 70's witnessed a vibrant and flourishing cultural scene.

In Lomé, the radio stations are airing afro-american music like Ray Charles, James Brown or the latin sounds of Celia Cruz. Young togolese musicians get inspired by these sounds such as the singer Bella Below whose talent brought her to New York or Rio even at the Olympia Hall in Paris.

TOGO SOUL 70 project, is the collaboration between Julien Lebrun, label Manager and Liz Gomis, journalist and director. Two friends that are combining their skills to relate the process of pressing a compilation of rare grooves in Africa

From the original quest, searching for vinyls and right holders in adventurous conditions (sometimes) to the contract final signature, we'll travel throughout Togo to witness the post-colonial story of the country by the prism of its soundtrack

More than a digging session, we'll highlight togolese culture through music. Music that you'll be able to listen in May 2016 on the double vinyl compilation TOGO SOUL 70 (Hot Casa Records gatefold)

THEY ARE SUPPORTING US:

If you believe in us, in this project, we are calling for you generosity to help us cover the expenses related to technical equipment and logistics:

WHAT IF WE REACH OUR GOAL BEFORE THE DEADLINE? If you help us reach our goal, we expect to organise a live gig reuniting all of the musicians we'll meet, to create a special band and a special track that'll be the sound of the entire documentary Of course, we'll film it so you'll have a good restitution of this work And if so, we'll be able to hire a local cameraman and a sound engineer THANKS A LOT AND LET'S MAKE IT HAPPEN!!!