WE NEED YOUR SUPPORT TO RE-LIVE OUR "PINTER" AT THE AVIGNON FESTIVAL 2017! 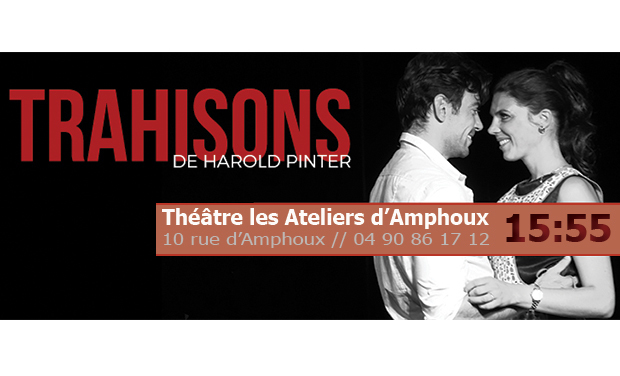 Why go back to the Festival of Avignon with Betrayal?

Betrayal, in french "Trahisons" is one of the contemporary plays that's most performed in the world. It's the last long play Pinter has written and the only one losely based on his life. He was awarded the Nobel Prize of Litterature in 2005 and Betrayal is surely an example of his best work. To crown it all, this year is the 40th anniversary of the play.

It's a thesis on today's world:

Betrayal seems to portray a classic bourgeois drama about adultery. Emma, Jerry and Robert form a love triangle where passion and friendship create rivalry and hidden lies. However the play also presents this idea: Is adultery only condemed to be explored as slapstick or vaudevillian or could it be written as a proper and dignified love story?

This play is our obsession:

After over 40 performances in 2016, we were still searching for the hidden meanings behind the words of Pinter. This quest has brought us to another level of execution which we'll showcase in this new version of the play.

How will we succeed in the largest Theatre Festival in the world?

From July 7th until 30th, Avignon welcomes over 1 400 shows every day. We are very lucky to participate in this extraordinary event for the second year in the row.

First of all, we have a rocking team, our new actors Cyril Cotinaut et Frédéric De Goldfiem are former performers from the National Theatre of Nice. Our composer Elise Cociuban is also finishing her Masters at AFTRS (Australian Film, Theatre and Radio School).

The word-of-mouth has already been launched last year. It's common knowledge that journalists and theatre directors like it when a play persists through the hardship of the Festival and comes back for a second time.

On top of that, we've performed at the festival 4 times in the last 8 years so we have a better understanding on how to get noticed by the crowds (what to say when we hand in the flyers, where to put our posters, which events to attend etc...)

So thanks to you, we will be able to serenely conquer this amazing challenge.

These are hard to translate. Believe us, they say good things about our play ;)

prepping the posters - they're stuck to cardboard before being put up

We want to finance our festival as autonomously as possible, however the costs are so high that your contribution would help ease our financial burden.

Our goal is to collect 4 000 € which will be re-invested by our not-for-profit theatre company "Les 13 Rêves", allowing us to reimbourse part of the theatre lease and advertising campaign.

Of course, if we manage to collect more money, this will be re-invested in the other features of our budget.

How you can help:

- Share this page with your friends, especially to those who love Theatre and Cultural expansion.

- If possible contribute financially, with as much as you can to help us collect the full amount we need.

We want to take you with us in this adventure. This is why we will create a video blog on our Facebook page in order to show you what it's like to be part of the incredible Avignon Festival.

If you manage to make an appearance during the Festival, come have a drink with us.

A big thank you to you all!