Help us for a charity project which update traditional techniques of construction through participatory building-site in Brazil! 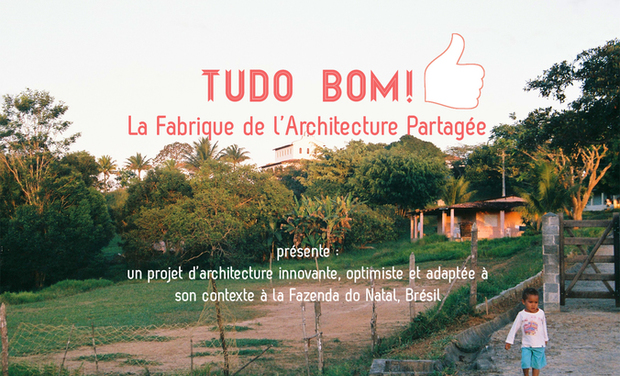 The association Tudo Bom ! La Fabrique de l'Architecture Partagée ( or Tudo Bom! The Factory of shared architecture) realises projects for the benefit of other associations or for private people. The association tends to promote participatory building-site to create new and adapted architectures. The goal of each projects is to adapt the local techniques of construction and materials in a contemporary way but in the same time to teach these knowledges to the local population.

Tudo Bom! develops since 2014 a project with the humanitarian association Points-Coeur. This project plans the construction of a laundry point, a bus shelter and a new common room for a village near Salvador of Bahia in Brazil which welcomes children from the slums.

This adventure is divided into two steps. First the constructions of the laundry points and the bus shelter in april 2015. Then the construction of the new common room of the village from autumn 2015.

It's for the first part of this project, which starts in april 2015, that we need your support to collect 8500€. This budget will allow us to buy materials and tools, to pay the delivery taxes of the materials and the cost of the building-site.

Students in Master 2 at the National School of Architecture of Versailles, Laure Humbert and Camille Mauboussin have both studied abroad and have a strong  personal associative commitment: Laure participate to a volunteer year in Napoli, Italy and Camille is a volunteer in the association Architecture&Développement in Paris. After these experiences which transform their individual vision of architecture, they wish to give their knowledges and know-how for charity projects. Thinking that architecture is first a field which should help Human, they created the association Tudo Bom! La Fabrique de l'Architecture Partagée in 2014.

"Tudo Bom !" - or "Together everything is fine" in portuguese - wants to give optimism all across the world. Optimism for people towards who projects are oriented, but also for the profession of architect that knows a crisis in term of employment and tough challenges - due to the economic, politic, human and environmental crises. It is time for architects to rethink their practice and modes of action. Together optimism and innovation have the potential to develop a new architecture that makes sense.

Architecture doesn't just use all the ressources of the planet without taking care of the local and social contexts. On the contrary architecture can be adapted to the environment by using local materials and adapting traditional techniques to contemporary buildings. Materials like mud or wood are often seen as materials for poor people and unhealthy architectures. That's why other materials such as concrete or bricks are often preferred - even if they are less or not adapted to the environment and climate. The idea here is to update these old and traditional techniques, to reuse them for their economic and ecological advantages, for their abilities to create a site-adapted architecture.

After the project proposition made by Points-Coeur in the spring 2014, Tudo Bom! travelled for one month in september 2014 in Brazil. They spent time in this small village near Salvador of Bahia to realise site analyses and to take measurements of each buildings. They also met the inhabitants of the Fazenda do Natal to understand their different activities, needs and wishes. This travel was also the opportunity to learn more about the local techniques, ressources and materials of this Brazilian region. They realised that Brazil, like many other developed countries, lost its construction knowledges and mainly build today with industrial materials. But traditional techniques such as "Pau-a-Pique", gabion or construction with bamboo are still visible in the urban landscape and seem really adapted to the climate.

These technics are totally ecologic, adapted and respectful to the planet.

Fazenda do Natal is a welcoming village located near Salvador of Bahia. Since 1992, the association Points-Coeur proposes to children, young people and adults to leave their precarious situations (life in slums, street life, social center…) by coming to the village and to live in a new and more secure environment. Built in the hills of Simoes Filho, this village offers them a new life with people who listen to them, take care of them and give them back a real structured life. Each of them lives with the volunteers of the association in different houses.

Generally, the association Point-Coeur welcomes people for a period of one to three years, but it also happens that some people live there for a longer time - in particular children born in the village. Fazenda do Natal offers them the possibility to live in a natural environment and also to reorganise their life around with time for school, for works, for cultural activities, training, and activities for the community.

Fazenda do Natal works as a real village. A dozen of houses are present and organised around the church of Menino Jesus. The laundry point and the main dining room with the oven are located at the lowest point of the village. This is where the volunteers and inhabitant meet to eat all together but also where a scholar structure is organised.  Today, the village needs more and new laundry points, a new bus shelter and the construction of a new common room.

Today, the village only has one old laundry building which is not enough anymore - we plan to install more of them. Also, by talking with the inhabitants, we realised that the current location needs to be changed - the future locations have been decided with them. The piped water network will be extended to allow this reorganisation.

Today, there is no bus shelter in the village to wait the buses going to the school or to the offices of the association located in the center of Simoes Filho. The idea is to build this bus shelter close to the place used as a parking by the inhabitants that would allow children and volunteers to stay away from the sun and bad weather while waiting.

The village often welcomes external groups and children from local orphanages. When they are there, they gather in the  current dining room. During that time, inhabitant and volunteers can’t access this place anymore. This situation bothers their daily activities. By creating a new common room, external groups and inhabitants could have their own places that would facilitate the cohabitation.

The challenge that faces the team of Tudo Bom ! is to rationalise traditional techniques and to build in april 2015 the different laundry points as well as the bus shelter through a participatory building-site. This will be organised via a workshop bringing together the inhabitants of the village and students from the National School of Architecture of Versailles under the direction of bamboo construction, gabion and “Pau-a-Pique” specialists. The main goal of our initiative is to transfer this knowledges to be then reappropriated by the local population and workers for their futures constructions.  The constructions of the laundry points and the bus shelter constitute the first stage of our action and will work as prototypes allowing us to experiment these traditional techniques. We will continue our work in the fall 2015 with the construction of the central home - the main construction of the project. It will include a kitchen, a bread oven and space to meet and relax. This second building-site will also be organised in a participatory way.

Since its creation in 1990, the humanitarian association Points-Coeur considers loneliness and exclusion as the first causes of distress both in poor and rich parts of the world. The association developed its activity internationally by building houses or villages that welcome people in more that 20 countries - with focussing particularly on isolated places to offer their support to the most excluded people. By its action and the work of its volunteers, Points-Coeurs wishes to contribute to the development of a more united and human world where individus receive the attention that allows them to live with dignity. Points-Coeur bring them their support really fast as Laure was a volunteer of them during one year in Italy and as Camille was also implicated in other association of development.

The National School of Architecture of Versailles

The National School of Architecture of Versailles, characterised by a strong associative tradition, supports the action led by its two students Laure Humbert and Camille Mauboussin for their association Tudo Bom! La Fabrique de l'Architecture Partagée. The school financially supports the association with a grant of 2,500 euros as part of the first phase of the project coming in april 2015.

Nominated for the Global Award, Anna Heringer started her engagement in architecture and development, in 1997, at the age of 19 years old when she was volunteering for Shanti Partnerschaft - a german ngo working in Bangladesh. She started to study architecture two years later at the University of Linz in Austria. After receiving her diploma, she builded in april 2005, the remarkable “Handmade School” - a self-construction and participatory project that worked as a starting point in her career.

This german architect is a veritable reference for us, as she works in a very similar way and philosophy than the team of Tudo Bom ! She gave us all her support and good wishes for the realisation of this project.

'Architecture is a tool to improve lives' - Anna Heringer

Architect and associate researcher at the centrer of research on mud architecture at the National School of Architecture of Grenoble (CRATerre), Wilfredo Carazas Aedo is also a member of a reflexive network on the theme "Pole des risques majeurs -GAIA" in France. He is a member of the Ibero-American network and seminars of mud constructions (PROTERRA and SIACOT).

Wilfredo Carazas Aedo accepted to come with the team of Tudo Bom ! in april 2015 at the Fazenda do Natal, to share his expertise on Brazilian mud construction during the workshop.

This crowfunding campaign concerns the the first stage of the project taking place next april (the construction of the laundry points and the bus shelter). The overall budget will serve to cover the association fees, the travel expenses, the living cost on site, and the invitation of specialists and the building-site cost. In total, we need to raise 15000 euros

Your support will help us to cover 57% of the total budget of the project - corresponding to the cost of the building-site. This crowfunding will allow us to buy materials, tools and to cover additional building-site fees. Our objective is to collect 8500 euros that will make possible the construction of the laundry points and the bus shelter in april !

If we collect more that 8500 euros, then you will allow us to anticipate potential additional building-site costs and let us begin collecting for the second part of the project : the construction of the new commun home that will come in the fall 2015.

A BIG THANK YOU FOR YOUR SUPPORT ! !

a BIG thanks + newsletter

a BIG thanks + newsletter + postcard from the building-site in april

a BIG thanks + newsletter + postcard from the building-site in april + your name written on the thanks wall + a BAG Tudo Bom! - The Factory of the Shared Architecture

a BIG thanks + newsletter + postcard from the building-site in april + your name written on the thanks wall + T-shirt TUDO BOM!