Pre-order our CD and help us fund a unique, musical, technological, human and charitable experience! 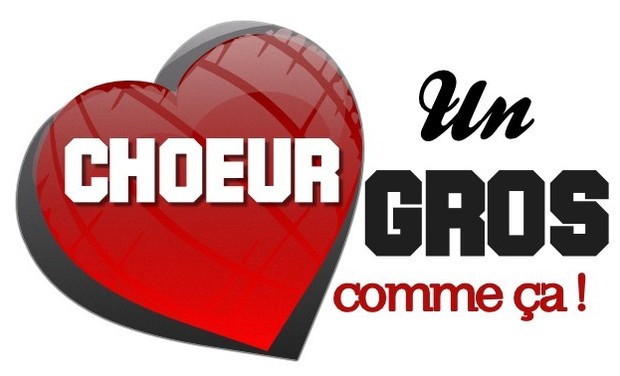 In the beginning, there was the thrill. A sublime emotion... Singing in a massive choir. More than 6,000 singers gathered at a Convention of the French National Association of liturgical choirs (ANCOLI). 6,000 little hearts singing in unison to give a special meaning to the word "together". Then came the surprise, while wandering on the Web. The surprising discovery of the outstanding and highly innovative work of a British composer: Eric Whitacre. A virtual choir. Many choristers singing in front of their webcam, gathered by the magic of technology in a pop-up choir. Mind-blowing. Irresistible.

Then there was the envy. The overwhelming desire to assemble these two concepts in France and to setup a charity project: gathering a large number of choristers in a massive choir to record an album of 13 Christmas songs and to give any possible profits from sales to charity (UNICEF).

For several reasons. Firstly, because the Christmas period is synonym of joy and sharing, what is appropriate to a project of this nature (in favor of children). In addition to lead us back to our childhood, having such an album in one’s CD collection is a must to get in the mood! Better if this CD serves a right cause! Then, because traditional Christmas carols constitue an ideal directory for polyphony. Finally, because these songs belong to the public domain (copyright are limited and inexpensive).

First of all, it’s a massive choir made of some choirs from Midi-Pyrénées which were invited to participate in the recording of 12 tracks of traditional Christmas carols. Around 1,200 amateur choristers will gather on Saturday, July 4, 2015 in a theatre in the Toulouse region to live a unique musical and human experience and to record the majority of the tracks on the album.

It is also a Virtual Choir composed of volunteer singers from the four corners of France who will record their vocal part by Webcam to produce videos. Audio tracks will then be extracted from videos, processed, and then mixed into a virtual vocal ensemble. This is technical magics that gives a new meaning to the union's voice. The virtual choir will perform a bonus track on the album.

To get a finished product (a CD of 13 tracks), the project will be organized into 5 major phases:

Phase 1:Development of a Web site and creation of a related Facebook page. This site will enable us to promote and monitor our project. The Facebook page will allow the virtual choristers to submit their videos to the votes of Internet users. At the present time, our budget allows us to welcome 400 choristers in the virtual choir.

Phase 1 bis: Composition of all instrumental versions which will serve as a musical basis for the recording of videos and the final tracks. This phase is concomitant to Phase 1.

Phase 2:Audio processing of the collected videos (extraction, cleaning). This is a crucial, both complex and technical phase carried out by professionals.

Phase 5:Mastering, pressing and digital distribution of the album.

The composer/arranger will start to work on the instrumental versions as early as January 15, for a late February delivery.

Development of the Web site

The time allocated for the development of the Web site is two months. It will be online at the same time that the Facebook page associated (March 10, 2015).

Videos submitted by the choristers will be subject to the votes of Internet users (our budget, as set out in the present time, allows us to accept 400 choristers for one track).

Provision of partitions (polyphony) to choirs constituting the real choir

Partitions in polyphony for the 12 tracks on the album will be sent to the conductors on March 10, 2015, so that choirs can prepare for the unique recording session which will be held on July 4, 2015.

Audio processing is one of the most complex stages of our project. Audio tracks must be extracted from videos and then cleaned individually to remove background and unwanted noise. The comprehensive processing of 400 videos is expected over a period of 20 working days, which will end around June 19, 2015.

This session is scheduled on Saturday, July 4, 2015. 1,200 singers of the Midi-Pyrénées region will meet at the Théâtre du Casino Barrière in Toulouse for a General reharsal, followed by the recording of 12 tracks for the album.

We will then have to proceed to the mastering of the album, the pressing of CDs and the organization of the digital distribution on the appropriate platforms. All these phases will be consecutive until the release of the album, scheduled for the end of November 2015.

The Project Management Expert, Philippe P. is at the origin of the project. Linguist Project Leader, passionate about Web technology, a little poet and creative, music lover and amateur of choirs, he sees in this project the opportunity to promote music as a vehicle for gathering individualities and revealing the charity power of a vocal ensemble, whether real or virtual. He will act as the "conductor" of this major project.

The Voice Expert, Sébastien L. has a double background in languages and IT. He has also been passionate of digital audio for more than 20 years (music creation, sounds, instruments/voice processing). His other areas of interest are Open Source technologies, information systems security, development of applications for mobile devices (Android), Web technologies, as well as music and its broadcasting modes (Web, crowdfunding, platforms like Soundcloud...)

Established as a freelance audio provider since 2009, he has demonstrated, for all its projects, an exemplary rigour, in compliance with the expectations of its customers. During his professional experience, he has gained expertise in voice processing. Taking care of multiple heterogeneous audio files does not fear him. His computer skills enables him to overcome technical constraints frequently encountered by professionals who have no advanced IT knowledge.

Inventive, curious to learn new skills throughout his career, he has been immediately seduced by this project (which offers a wide place to the processing of voices). So he immediately offered to participate as an active member. For him, this project is a new opportunity to demonstrate his abilities in this area and to acquire new knowledge.

Music is the thing that unites the most people. It transcends borders, combats prejudice, knocks over barriers. This collaborative project is a new chance to prove that music softens manners, which is much needed in these troubled times

The Web Expert, Alexey Z. is a Web developer with more than 14 years of experience and more than 400 projects in his portfolio. Holder of a postgraduate degree in physics and computer science, he has benn the Head, since 2007, of a Web development agency which realizes innovative projects for the Web or mobile devices (dynamic web Sites, online games, 2D and 3D configurators). Creativity, know-how and speed are the main skills of Alexey.

The Music Expert, Eric M. creates play-backs and arrangements. The quality of his services, recognized as very professional, led him regularly to be called by many structures of production such as M6 and many companies, associations, singers, imitators, etc. Furthermore, as a highly respected composer for his talent of melodist, Eric is often requested by authors and (or) performers and record publishers.  Eric has released an album at Apple Music in 1995, coauthored with Jean-Loup Dabadie, collaborated with Jean-Pierre Janiaud, Hervé Roy, Hervé Leduc, etc.  He also gives singing lessons to Performing Arts (Institut supérieur des arts de la scène) and regularly assists Sarah Sanders (vocal coach of Pop Idol, Studio des variétés, etc.).

The Audio Expert, Damien Z. sound engineer/acoustics, specialist of projects like “massive ensembles" (symphonic or phiharmonic orchestras, large vocal ensembles). Responsible for music and sound at a large studio in southwestern Toulouse, enthusiastic musician, he will accompany the project in its major phases until the finished product is released.

Such a project presents many expenses. This project is a technology and charity dream that we may not realise unless it is fully funded. This is the reason why we present this project today on a crowdfunding platform which allows a complete refund of contributions to contributors in the event of failure.

We kindly ask for your support to finance a budget which breaks down as follows: :

How to support our ambitious project:

1 / Financial contribution. In the right side of this screen, you will find a list of contributions from which to choose. Our project will lead to a tangible result (CD). We therefore be able to send our album if you decide to support us and if the project is fully funded: one digital track or one digital album, one CD or limited vinyl edition!

2 / By Sharing our project to your network (colleagues, family, friends)! We are not communication or social networking professionals, so a little help at this level would be very much appreciated.

We hope that our project will be of interest and we are counting on you and your entourage to make this collective dream a reality for all!

Receive our warmest thanks for this contribution! We will also mention your first name + initial on the Our contributors page of our Website

Contribute from € 10 or more and get a download card to download 5 tracks of our album. We will also mention your first name + initial on the Our contributors page of our Website

Contribute from € 15 or more and get a download card to download 13 tracks of our album. We will also mention your first name + initial on the Our contributors page of our Website

Contribute from € 20 or more and get our 13 tracks CD (Cardboard sleeve). We will also mention your first name + initial on the Our contributors page of our Website

Contribute from € 30 or more and get our 13 tracks CD (Jewelcase). We will also mention your first name + initial on the Our contributors page of our Website as well as on the CD leaflet.

Contribute from € 50 or more and get our limited edition of Vinyle record. We will also mention your first name + initial on the Our contributors page of our Website.

Avant-Première! Receive our CD autographed by the members of the project team, before everyone! You will be also invited to the Donation ceremony to the UNICEF!

Contribute from € 100 or more and get our limited combo edition (Vinyle record + CD). We will also mention your first name + initial on the Our contributors page of our Website as well as on the CD leaflet.

Contribute from € 500 or more and get our limited combo edition (Vinyle record + CD). We will also mention your first name + initial on the Our contributors page of our Website as well as on the CD leaflet (Rank 3 sponsors).

Contribute from € 1000 or more and get our limited combo edition (Vinyle record + CD). We will also mention your first name + initial on the Our contributors page of our Website as well as on the CD leaflet (Rank 2 sponsors), as well as on each of our communication media, press releases, etc.

Contribute from € 5000 or more and get our limited combo edition (Vinyle record + CD). We will also mention your first name + initial on the Our contributors page of our Website as well as on the CD leaflet (Rank 1 sponsors), as well as on each of our communication media, press releases, etc. + one special mention at the beginning of our promotional video clip.