UNDER INFLUENCE: The psychotic journey of an actress in a film based on Kate Winslet's past screen roles. 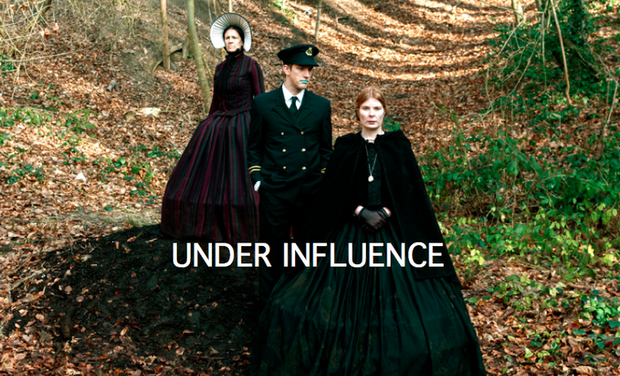 Hello cinema lovers and supporters! We seek for support to fund our 3rd and final shooting period of our feature film UNDER INFLUENCE! The video shown above is only a pre-edit of the opening scene of the movie!

Movie actress Julia Gordon takes the lead role in a new motion picture, which is based on her reenactment of and encounter with several characters played in the past by British actress Kate Winslet and other actresses/actors. Julia Gordon is known to be so devoted to her screen roles that she embodies them in real life. The film crew of this production is running behind schedule after she lost control of herself and turned into her own shadow.

UNDER INFLUENCE is a feature film portraying the mysterious and psychotic journey of an actress whose identity blurs with the characters she embodies. The plot being the point of entry into a kaleidoscopic experience of identity but also of theatre in the way of a visual, auditory and physical journey.

We completed our first shooting period that took place in France and Belgium, over 18 days in February 2015 as well as our first editing period. What awaits us: From 27 April to 13 May 2015: 2nd shooting period in France and Belgium; From 18 May to 6 June 2015: 2nd editing period in Brussels + sound design + music score; From 9 to 22 June 2015: 3rd shooting period; From 24 to 29 June: 3rd editing period + sound design + music score; From 13 to 26 July 2015: last editing period; August / September 2015: Sound mixing, calibration, transfer DCP; 1, 2, 3 October 2015: Premiere at Dansens Hus, Stockholm February 2016: Premiere at Beursschouwburg, Brussels; Among other places, the film will be projected in Cinema Jacques Frank (Brussels), Buda (Kortrijk) Festival Reykjavik (Iceland) and Inkonst (Malmö).

OTHER ICONOGRAPHIES from our 1st shooting period (February 2015)

The film is partially funded by the Flemish Community (Belgium, 60.000€), the city of Stockholm (3.500€) and the Swedish Arts Council (20.000€). It is also co-produced by Beursschouwburg (Brussels), Dansens Hus (Stockholm) and Kunstencentrum Buda (Kortrijk). The global amount of the funds we already received is 100 000 euros.

This financial support is unfortunately not enough to cover the costs of our last shooting period in June 2015.

The funds raised on KIss Kiss Bank Bank would allow us:

- To cover the rental of technical equipment (image + sound) and costumes for our third shooting period which will take place over 14 days in June 2015 in Essen (Germany) and Brussels (Belgium).

Over this shooting period we will film excerpts from an original ballet entitled 'Les Biches' in two theaters with a cast of six dancers and our two lead actresses. In our film, the main character: the actress Julia Gordon attends the premiere of the ballet in which she projects herself as a character interacting with the other dancers.

ARTISTIC INTENTIONS OF THE DIRECTOR/SCREENWRITER

The scenario of 'UNDER INFLUENCE relies on a narrative structure of ‘mise en abyme’. it connects parallel virtual realities as the spectator is invited to assist to the projection of a film that is about another film which re-visits and inter-connects past films. It is also about an actress who plays another actress in the skin of several female film-characters. The narrative stands at the intersection of the real and the fictional in an endless unfolding of layers of fictions and perspectives.

This film can be seen as a celebration of cinema, in the shape of a subjective psychose: the psychose of an actress who loses her own image on film, dragging the spectator along with her into the sound of her voice and into darkness.

Furthermore, UNDER INFLUENCE is drawing from the creation of cinematic, musical and sonic “objects" which wants to encompass an innovative experience of cinema  by moving past the conventions associated with this medium namely the bidimensionality of the projection screen, the primacy of vision over the other senses, the institutionalized buffer zone between the spectator and the screen.

The 'sensory objects' used for this purpose, namely:  film, sound, hand shadows, music and darkness are orchestrated as to create a multi-sensorial and immersive cinematic experience. Each of these 'objects' explore dramaturgic lines that convey dreamlike, but also realistic and narrative situations supported on the sensorial and imaginary perception of the audience.