Help Clément Denis and India Leire create a beautiful, permanent installation made of mosaic, stone and metal in Jericho, Palestine! 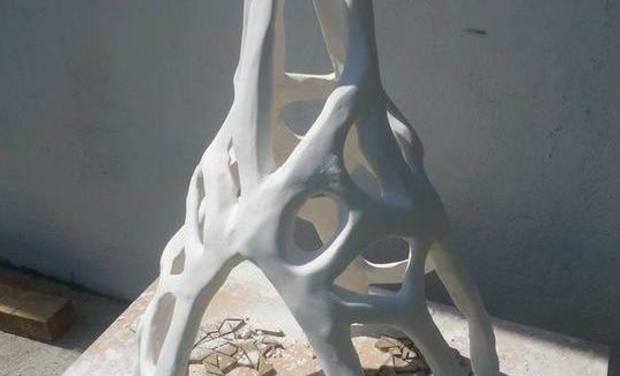 On the 30 and 31 of October of 2015, el­-Atlal will host the first edition of its art days in Jericho. This event will gather different artistic mediums throughout the town of Jericho and will invite the local community to have an active participation.

Clément Denis and India Leire, two artists represented by l'Officine, have been invited to take part in this event through a two-week residency in Jericho, which will lead to the creation of a permanent piece of art in the city with the participation of the population of Jericho and its craftsmen.

The aims of this residency :

> to create a collaborative piece of art in a public space

The piece will be inaugurated for the opening of the event, on the 30th of October.

For more information on the event, visit el-Atlal's website.

Clément Denis and India Leire, two young artists living in Paris, have been invited to participate in this pilot artists' residency and create an in ­situ permanent installation.

India Leire is an English artist based in Paris, who graduated with honours from the Paris National School of Fine Arts. Finalist of the ICART prize, hosted at the Espace Pierre Cardin in January 2015, she is specialized in sculpture.

Clément Denis is an artist based in Paris, he studies at Ecole des Beaux-Arts in Paris. He is specialized in mosaic and painting.

The piece was conceived with Jericho's available materials in mind. Jericho, through its artistic and historical heritage, is renowned for its mosaic creations. Clément and India will collaborate with local craftsmen (mosaicists, sculptors and metallurgists) to create the piece .

"We have decided to create an installation that will interact with its environment: the city, the future residence and its surroundings. Through this work, we intend to explore the questions of presence and absence. We will construct an elegant white cage structure with intertwining vines, resembling a cocoon-shaped spider web. The holes in the organic structure will give the piece a sense of weightlessness.

A mosaic floor will climb the legs of the structure, acting as a link between air and earth. As sunlight flows inside the structure, it will reflect off the mosaic and onto the inside walls, creating shadows which will will in turn form patterns on the floor as the day progresses."

Arthur Muller, film director and editor, will capture Clément Denis and India Leire's experiences during the artistic residency from the moment their feet touch the ground in Jericho to the opening of the el-Atlal art days.

His film aims to show the relationship between the two artists as they construct the piece and will also feature interviews with art historians, the pupils of Terra Sancta School (who will participate in the building of the installation) and other invited artists.

Arthur Muller will document the collaborative process between the artists and Jericho’s craftsmen, as well the impact of the piece on the culture of the city. The film will also highlight the city's surrounding landscapes, the artist's daily lives at the residency and the el-­Atlal art days on October 30-31. It will be screened at the end of the residency and will be available for download on a web link.

City of mosaic and stones

Words of the el-Atlal team

"Jericho, known as the city of the moon, is often said to be one of the oldest continuously inhabited cities of the world. Its historic heritage gives it a special kind of enchantment: the ruins of an Omayyad winter palace overlooking old mosques coexist with the pagan roots of the city and with an abandoned casino, previously destined mainly to the Israeli population. All of this gives Jericho a special place in local imagination.

The existence of Jericho, as that of any oasis, is something of a miracle. This is why it remains to this day a city of pleasures. Marc-Anthony offered the city, as he would have a jewel, to Cleopatra. Looming over the city, the troglodyte monastery of the Mount of Temptation still carries this essential part of the oasis: a city of sins, of love and joy, Jericho has been the target of immemorial hatred. But, like its flamboyant trees, which grow in the desert for no discernible reason, the city knows how to rise up back from every one of its downfalls."

We know Jericho for its biblical heritage, but also for its ancestral practice of the mosaic. Finding its origin in the antic Roma, the mosaic has been spread everywhere in the Mediterranean world only to find one of the most important places of its accomplishment: Palestine.

Your fundings will allow us to buy the materials and tools for the piece..It involves:

And if we go over our objective, we will:

>>> Refund the flights tickets of the organization team

>>> Create the best exhibition restitution in Paris, in partnership with el-Atlal and L'Officine

>>>  More exhibitions and amazing projects in Paris and elsewhere !!!

WORLWIDE: Our eternal gratitude + a virtual kiss and a dazzling karma!

All the above + your name on the Thank you's wall

All the above + meet India and Clément at the vernissage of their exhibition on the 8th of October, in the Atelier Gustave, Paris.

All the above + a personnalized invitation at the exhibition and the documentary premiere in a secret place in Paris.. SURPRISE

All the above + a private link to 'Arthur Mûller's documentary

All the above + a screen print review with photographs, texts and drawings of the artists' journey in Jericho.

All the above + an art piece by Clement Denis (drawing on painting, paper, 30x40cm)

All the above (except 3000 euros) + :come meet us at Jericho's festival for two days ! (airplane tickets and accomodation included))