Uninspired will release their first pro video directed by the legendary Clement Steffen! But for this we need your help. 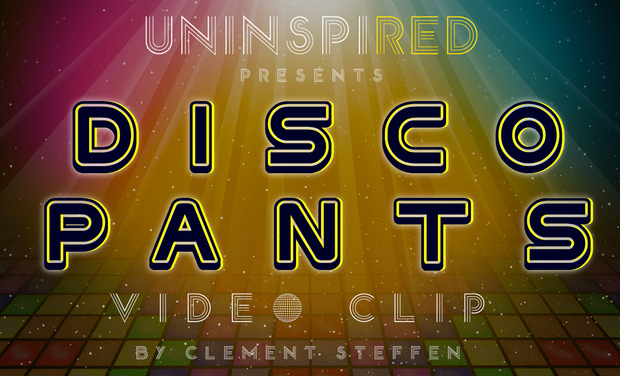 Besides, let's talk about DISCO.

Uninspired is about to launch his first CD on the market; many concerts will ensue in Belgium, Luxembourg, France, Germany, England and many more.

On this EP you will find the band's smash-hit:

Well ... the other songs, they are also musical triumphs, right! But this one, is really cool. So we thought that it might be time to take the step and release a "CLIP-TO-END-All-VIDEOCLIPS-THAT-WILL-TEAR-A-HOLE-IN-THE-UNIVERSE".

We talked to our producer friend - the great Clement Steffen - and he was immediately enthusiastic about the idea of producing ​​DiscoPants.

Doing  a music video requires considerable time, equipment, people, and all this has a price. To make this dream a reality, we will need your support!

The money raised will help us fulfil our cheesiest ideas.

The budget will be allocated as follows:

€ 200 of post-production: editing and calibration

€ 100 of promotion: To give more visibility to our project when it is completed and able to conquer the wooooooooooooorld! :D

A piece of cheese

A piece of cheese and a hug.

A piece of cheese, a hug. and an autographed CD by your favourite Cheese-Rockers.

A piece of cheese, a hug and an autographed limited edition CD / T-shirt / poster.

Previous reward plus two tickets to one of our concerts with special dedication.

The above + we write a song about you!

an Uninspired concert for all your friends!

All previous rewards + we release a t-shirt with your face on it.

A piece of cheese. Huge. Oh... and our undying love.