I photograph my objects from an odd perspective.They resemble huge insects.I color the systems that power them and they are brought to life. 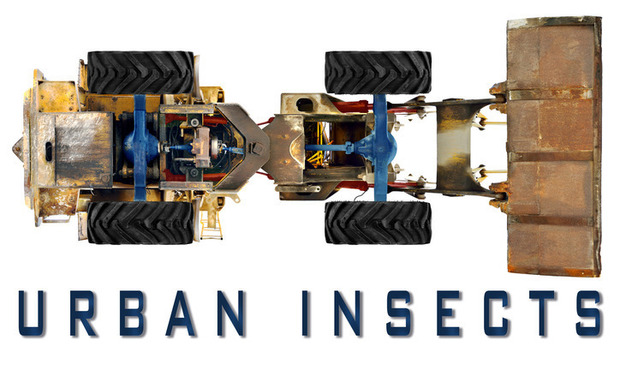 The idea of the project came during my class of Conceptual photography in the university where I was assigned the theme ''The world beyond us". I thought that everything is around us and we see ourselves from every point, except upside-down.

And initially, I photographed people underfoot:

A year later I wanted to expand my idea, but photographing people was no longer a challenge. When I took my car to the workshop for repair and they picked it up, I saw the sequel of my series:

I began to look for various vehicles and a way to lift them.

The realization of the project is sometimes difficult, but always fun.

Lifting the smaller vehicles is easy - I've used the help of my friends in Sofia and we picked them up on a tree:

For the bigger machines I found a construction company in the eastern part of Bulgaria in the town of Yambol. They were very helpful and agreed to lift some trucks and an excavator, although they were confused and worried for me:

While on  trip in eastern Africa, I found out a new kind of vehicles for me, which in Europe we don't have - a tuk-tuk. And of course I asked a few guys to lift it...

The concept and the name of the project came naturally. My first photographs were ready and I looked at the machines' systems - they resembled bugs. I decided to paint every system in a different color, to make them more vital. Thus they became Urban Insects.

This series examines how a change in perspective can bring a new way to see ordinary objects.

I already have 10 Urban insects and with them I had the opportunity to take part in two group exhibitions and in one solo:

To continue the series I need to find a way to photograph busses, wagons, cranes, road rollers, crawlers, bulldozers, compactors, etc. To do this for one 'bug' I need funding for:

1. Travel expenses within Bulgaria - about EUR 70

3. Hiring a photographic technic per day- about EUR 30

5. Hiring one vehicle to photograph it per day - different for every type but let's say about EUR 120

6. For the software work on the photograph and expenses for printing - about EUR 50

I think it's necessary already to think about my safety and buy simple things like shoes for EUR 20 and a helmet for EUR 10.

For the full project I need funding for EUR 2080.

Big thanks for your support! I'll keep you updated on the project

A PDF file with the project sent by e-mail

Postcard with any of the images from the series

Postcard from Sofia and а magnet, 8 cm on the longest side with any of the images from the series

Puzzle with any of the images

Signed and numbered digital print, limited edition of any of the images, 50 cm on the longest side + any of the awards from 1 to 4

Signed and numbered digital print, limited edition of any of the images, 110 cm on the longest side + any of the awards from 1 to 4

I'll come and photograph your personal car and convert it into Urban Insect, the photograph will be 110 cm on the longest side + any of the awards from 1 to 4. Valid within Europe