Help financing Laurene Carmona's short film : We Will All Be famous ! 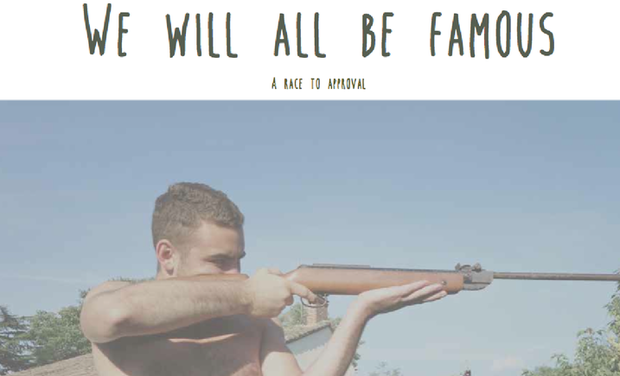 As Jake would not become a hunter like his father, he left his hometown for the city. He aspires to be an actor and cultivates dreams of wealth and glory with his two best friends Dylan and Allison. He hopes to become someone important and loved so he could be to his father.

Back to his hometown for the week end, torned between his dreams and disillusionment, Jake will have to confront his father’s indifference and some unexpected events.

A generation of twenty-something who hard belevies in its destiny as rich and famous. Jake and Dylan left to become actors but they’re spending most of their time looking at themselves, they think they are specials. Allison , Jake’s other best friend, stayed in their village, trained by her mother since she was a kid. she is dreaming of a singer career, performing for differents occasions.

Jake and his father have trouble communicating because they don’t really understand each other. It’s a gener- ation fight.

The Knives - Pass this on

In 2011 I almost used a camera for the first time. So I started to film my friends and people at school. I’m working on my generation ( born between the 80s and 00s ) since then.

Once I was working to write a text like this one, about my work, and a friend came and sat next to me. He told me that after the ” hipster” the new figure is ” the duchbag”. He described it as a creator. The weird- est people today are these kids with reality tv shows and pop culture. It creates some schizophreniac forms of identification. We are a huge mess of references, knowledges and tastes. We’re entilted, confident more ambitious than any generation before but also more anx- ious, bored and narcissistic.

Nowadays young people have a strong notion of their own image, with the multiple possibilities of internet : everyone can be someone. We’re looking for the more “ likes “ and “followers” - It’s a desperate race to ap- proval. And I thought that sometimes the only approval and proudness you want most of all is probably only your parent’s one.

Laurène Carmona is graduated from L’École d’enseignement superieur d’arts de Bordeaux ( fine arts )in 2014 with the congratulations of the jury. She is now studying at LUCA school of Arts for her master degree.

Teenagers and particulary her own generation has been her main source of inspiration since 2011. She directed 3 shorts films “ teen film, “ juveniles” and “ 1+1 “ during her bachelor’s years.