Help/Finance a studio recording of an independent musical record, with many talented musicians from the French Riviera. 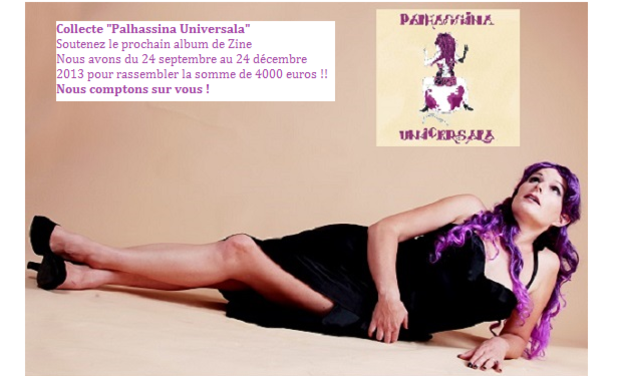 Because  Zine's first album called "Folie Douce" was created ​​in 2012, thanks to the help of  more than 120 subscribers,

we want to share the same experience in organizing a money collect which will  make the  recording of Zine's second album  possible by summer 2014 ...

in honor to SAUVAIGO, the Occitan poet of the Beat Generation.

The "palhassina" in Occitan means  the female clown, a sort of  female "Don Quixote."

This LP will have a "Folie Douce" B-side flavor.

The songs will be in French and Occitan.

The album “ Folie douce”  has been positively noticed  by several  media:

and the Regional Council of PACA  Provence-Alpes-Cote d'Azur who was seduced by  its cultural diversity and  wanted  to reward a collective art initiative in the PACA region.

In the recent past, Zine was invited abroad:

To prepare  this second album, Zine wrote new songs in French and Occitan, about topics she likes, and also she has set to music poems by Rudyard Kipling, Xavier Durringer, Adnan and Sciença (Occitan poet). On a bonus track  will be presented a  trilingual (Arabic / Occitan /  Yiddish) adaptation of the traditional song "Tumbalalaika" with the singers My Saïsara (Yiddish) and Tarik Lamirat (Arabic)

The musicians invited to participate are numerous:  we will unveil their list very soon.

Now, here's an extract of the  Manifeste en faveur de la chanson ( “Manifesto for the song”)

The artistic flowering is sad when it rhymes with economic crisis.

We, musical artists, remind all the musical  "industry" that  authors, composers and performers are the true people providing the raw material. And  finally at the other end of the business chain,  the audience has the last word.

All others, absolutely all, are only intermediaries whose purpose is to streamline, to boost, to  expand the artist-audience relationship ...

However, a large part of the song industry is unknown, one sees and hears only the tip of the iceberg in the song industry world , and big labels share the media's interest : the financial viability of an artist should not be the sole selection criterion!

Zine's artist page is also on the website of the “Cooperative chanson”: here

Whatever the amount we are keen to reward our donors by sending a surprise, therefore please email  lacandela06@gmail.com mentioning your details and contribution.

That money collected  will allow authors, composers, performers and sound engineers involved to get partly payed  for their involvement.

Namely, let's give an example : for an album creation, professionals  who were  taking risks were able to involve 100 000 euros on such kind of  project. The estimated budget for the album "Folie Douce" started on a basis of 25 000 euros and, in the end, we were able to achieve our project with 5000 euros, because our team worked very hard.

Professionals who have had the CD “Folie douce “ in  hands have been  unanimous on the quality of its production. Because we want to continue our activities and we remember what we have been through,we are launching a new collect to create  successfully our new CD.

To show you how serious this new project is, here is our previsions for the budget necessary:

A financial statement, once the collect is finished,  will be given to you who support us on this project of a second CD.

Grants from  professionals and public authorities : 2000

Operating independently being one of our goals we might allocate some of the funds to purchase music devices such as a recording mike (€250) or a video camera (€550).

Now you know everything ... if all this description has convinced you,  become producers and help us!

give 1 euro without compensations

a condom “Zine”: with an inscription "Not only she doesn't open her legs ... but she talks" collector series- home delivery choice: gold or silver (specify in the email) quantity available: 63 colour gold, 56 colour silver

CD collector Zine, published in 2003, with four songs recorded by the artist The Quincaille and Zine in the legendary studio Collective Blue Devils in Nice. Do not forget to give your mailing address to send.

Five tracks on the CD collector My Hairdresser wave (thank you to specify your email) Recorded by Gallomusic during the winter 2004/2005, this 5 CD titles is an experience of fusion between protest songs and the world of musical Breton tradition.

an A3 color poster of the show dedicated Folie Douce (only Nice area) and delivered to your home ... thank you for being precise in your address (door, stairs, level etc.)

The entire album Folie Douce in wave HQ, you can already listen to zine.fr. More print jacket. Thank you to leave your email address. If you want to playback for karaoke versions, add 25 euros.

The very first record of Zine in 2002 (wave) - thank you to specify your email -15 tracks with very simple arrangements, recorded, mixed, mastered in July 2002 at the station of St-Dalmas de Tende by Psychonains Production.

The text of a song from the album Folie Douce handwritten by the artist and dedicated the song + WAVE (thank you to specify where in the email and the content of the dedication - possible French, Occitan, English or other language of the world)

Zine can also create a song for you (melody and text + model) if you ask , on the topic of your choice, in French or Occitan

a private concert performing Folie Douce in the place of your choice (we manage for the music) This concert” Folie douce” is a sort of mixture of “drama, declamation, humour of a female clown falsely naïve”. All the details here if you are tempted to become producers and help our team! http://www.zine.fr/wp-content/uploads/CDCOM1.pdf