The career of Abderraouf Ouertani is above all a story about curiosity and meeting. It begins with the discovery of the luth in Tunisia when he was a child. In the National Conservatory of Tunis, he meets young luth professor Haykel Siala (disciple and collaborator of oud iraqi virtuoso Naseer Shemma) who showed him new perspectives that would permit him to better explore his instrument. Prematurely, he leaves the conservatory. 'The luth is dead, Long live the luth !' To seek new horizons, he moves to Paris in 2008. He obtains a Landscape design Master degree which he has started in Tunisia. then he studies ethnomusicology at the University of Paris. Driven by his passion for Jazz he enrolls respectively in conservatories of Versailles, of the 6th and the 9th arrondissement of Paris, as well as that of Bobigny. In 2013, June, he graduates from the municipal conservatoire of the 6th arrondissement of Paris and obtains a Certificate of Musical Studies in Jazz singing with American jazz singer Sara Lazarus, and a Diploma of Musical Studies in Jazz singing from Departmental Conservatory of Bobigny. Currently, he continues his Doctoral Studies in the domain of Anthropology in Music at The School Of High Social Sciences Studies of Paris (E.H.E.S.S.). In 2013 January, the 26th Abderraouf Ouertani had the chance to perform his own composition 'From Versailles To Ghaza' with the company of pianist Bojan Zulfikarpasic (alias Bojan Z) during a concert he gave at the 'Dynamo de Pantin'. He records a first duo disc of his compositions for oud with percussionist Mohammed Amine Jebali. His first album entitled ' Tales of a Miserable Luth ' is out in 2013, July the 3rd. He chose the formula of the quartet to present it on stage accompanied by South Korean pianist Daum JUNG, replaced by Chilean double bass player Patricio LISBOA, French multi-saxophonist Benoît MEYNIER and Palestinian percussionist Yousef ZAYED. 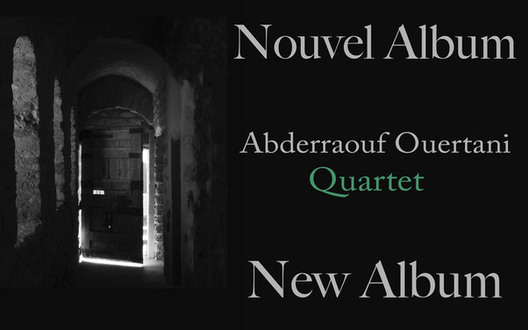