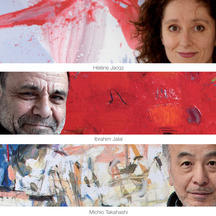 Hélène Jacqz - www.helenejacqz.com - Born in Paris on 10 February 1964. She enrolled at the National School of Fine Arts in Paris (Beaux- Arts) in 1986, drawing from nature and at Le Louvre. An admirer of the Nabis, she obtained her Beaux- Arts diploma in 1991 as well as two scholarships, in 1991 and 1992, to study at the Parsons School of Art in New York (Fullbright and Lavoisier). Since then, she works in her studio in Montrouge (near Paris) and shows her work in galleries, art centers and in international exhibitions in France and abroad. Ibrahim Jalal - www.ibrahim-jalal.com - Born in Syria in 1947, Jalal enters the School of Fine-Arts in Damascus in 1969 and obtains his diploma in 1973. He arrives in Paris the same year and visits museums and gal- leries regularly. In 1974, he enters the National School of Fine-Arts in Paris and re- ceives his diploma in 1978. He exposes in Damascus, Paris, Boston, New York, Dubai, Germany, Luxembourg, Italy, Norway and Denmark. In 2010, he is invited to a re- sidence in Stavanger, Norway and exposed at Kunstforening (the town’s former museum). His works are collected around the world. 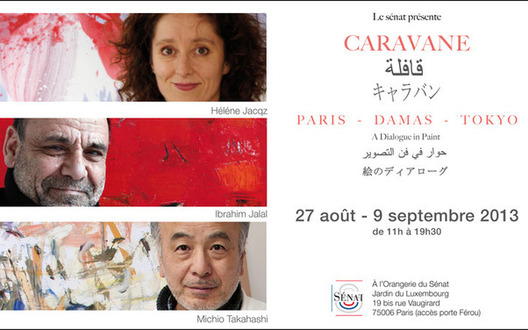