Damien Schmitt is a complete artist with incredible technique and stunning musicality. Born in a family of musicians, Damien first learned playing the drums with his father (Daniel Schmitt). From the age of 4, he practiced as a musician directly on stage. His mother being a piano teacher and singer in the family band, he took an early interest in singing and learned to play several instruments including bass and guitar which quickly became his favourite. At 16 years old he produced, directed and released his first album under the name Yossoma. He sings and plays all the instruments on this record. The genre ranges from funk to hip-hop with some metal influences, a strong jazz presence (trio, quartet and big band), as well as jazz fusion. After this first experience as a professional recording artist and director, he created his band where he was writing music and texts. This band ended up performing at the final of the “Printemps de Bourges” festival in France, a very important summer festival where many new talents started their professional career. The adventure continues and 3 years later he released a second album: Yossoma - FM Francophone Revolution. After selling thousands of records with his self-produced records, he moved to Paris. This is where he started playing as a live drummer on tour for the most famous French artists like Yannick Noah, Khaled, Gage, Alain Georges Jones, Emma Daumas, Zap Mama, Les Nubians ... He forged a solid reputation in the jazz fusion and played with Dominique Di Piazza, Jean-Marie Ecay, Hadrien Feraud. It also replaces Paco Sery in Sixun... Offering also his talents on records, he is featured on a lot of best seller albums (see Discography) with for example Jannick Top & Eric Lelann, Bireli Lagrene, brothers Raymond, Hadrien Feraud. He is also a member of of Jean-Luc Ponty’s band since 2007. Always looking to develop his personal projects, he moved to Los Angeles where he knew he could make the right connexions that would help him move forward in the direction he wanted without having any barrier in his way. There was born the project The Dada Show: his newest most personal project which is one of the most incredible display of talent, musicianship and live entertainment one can experience in a live venue. Solicited and always ready to travel the world, he discovers the Montréal Drum-Fest in October 2009 and joined Alain Caron’s band on tour for the bassist’s latest album "Septentrion. He falls in love with the warmth he receives from the people of Quebec and then moved to Montreal to assemble the last pieces his new project: The Dada Show, accompanied by outstanding musicians! He is currently working on The Dada Show’s first album that is greatly expected from Damien’s fans, especially since the official presentation of The Dada Show that first appeared on stage in anincredible performance in Montréal on May 5th 2011. In 2012 Damien is called to be part, as a singer, to the well know TV Show: The Voice. In December 2013, He recorded the New Alain Caron's album: Multiple Faces. Damien announced also his first solo album ELECTRO-SCHMITT at the end of the year. His inspirations are: Dubstep, Jungle beat, Drum&Bass, Reggae, House. In 2014 you could get drum lessons with Damien on the application: isYOURteacher. As you can See Damien Never stop working to offer you his best. Next project will be out in january 2016 under the name Dam'Nco Let's stay in touch with him, and be ready for the next trip. 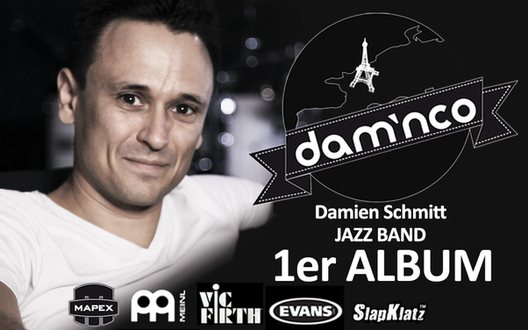