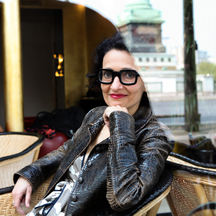 Sophie Bramly started her career as a photographer for various European magazines, including Paris-Match. She then moved to the U.S., where she documented the burgeoning Hip-Hop scene in the Bronx. Back in France 3 years later, she started working for television : « Hip-hop » the world’s first hip-hop show on TF1, followed by « Les enfants du Rock » on Antenne 2, « System 6 » on TV6. She then moved to London to be part of the team that launched MTV Europe, and created « Yo! » later adapted on MTV U.S. and a major success. Four years later, she moved back to France and became head of New Media for Universal Music. In 2007, she left the world of music to look into women’s empowerment and sexuality. She started her own company, created a website with a VOD platform, and produced numerous women oriented movies (documentaries & fictions) until late 2014. She then decided to move back to her first love, directing, and always lifted by her ideologies, highlighting those who are away from the limelight. Recent works : « Claque aux clichés » (26’) documentary on stereotypes on women (broadcasted on NRJ 12 & Chérie 25), « Ooooh! » (fiction - 71’), broadcasted on Canal +. She also published a limited edition photo book in 2015, "Walk this Way", showing the beginning of Hip-hop in New-York.