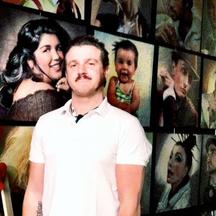 Vincent Malléa was born in 1974 in the Southern France, where he was bored until the day of his 20th birthday. He arrived in Paris with a handful of friends and some notions of B&W laboratory for only luggage, with this formless but firm intuition that he wanted to make beautiful things. Vincent Malléa is a little bit ,self-taught, technophobic: during almost 10 years, he developed his visual identity by drawing the main part of his references from a nostalgic popular culture and massmedias. Often pretending to flee elites and despising the modernity, he has been looking for plastic alternatives to compensate for the lack of technical means. While the photo was becoming digital - and because he had no computer -, he ventured to colorize his paper editions with photographic ink with the aim of obtaining the colors which he looked for. As he did not want - nor could - order to a professional laboratory some big size editions, he learnt to print his works in several pieces to reconstitute them, under the shape of collages, as it is used for advertising posters. And because, sometimes also, this collage missed a few details and neatness, as a child, he began outlining them as he made up faces on magazines cover... It was the end of the XXth century. His singular path brought him to conceive several cd jackets and show posters. He worked for the press, realized frescoes, and displayed his works between Barcelona, Berlin and Monaco. He answered numerous orders, by trying to remain the most independent possible and by short-circuiting the intermediaries of the market which tend to want to cut the direct links between the public and the artist.