Be part of the next Ai Weiwei/ Reporters Without Borders album ! 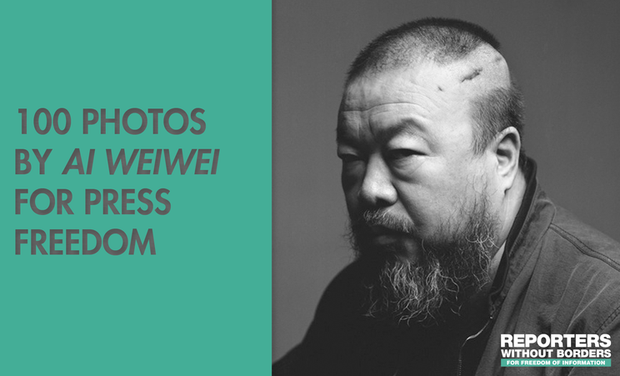 "Liberty is about our right to question everything”

Famous Chinese dissident and internationally renowned artist, Ai Weiwei has committed to the launch of an album Ai Weiwei: 100 photos for press freedom in partnership with Reporters Without Borders.

We invite you to participate in a unique adventure and to contribute to the edition of the album that will be released on September 12, 2013. This collector item will help raise awareness on the surveillance mechanisms in China, a country where at least 100 journalists and netizens are jailed for speaking freely beyond the official truths told by state propaganda.

Two Good Reasons to Take Part in the Project :

=> Participate in the production of an amazing and unique album

Ai Weiwei offers a unique vision that comes with its own crazy and original aesthetic. For example:

Or look at this:

Ai Weiwei is also one of the most renowned and courageous Chinese dissidents.

While organizing an investigation for the collection of the identities of 5,000 schoolchildren, the victims of an earthquake in Sichuan in central China, Ai Weiwei was beaten by the police. Because of the beating, he received treatment in Germany, for what was diagnosed as a potentially fatal concussion.

Given his visible displays of protest, the Chinese government closed Ai’s blog in 2009. Ai Weiwei was later barred from leaving China in 2010 and his studio was demolished in 2011 in a surprise attack orchestrated by the local government. He was then arrested and convicted, spending 81 days in detention in inhumane conditions.

For over 25 years, the sale of these albums has allowed Reporters Without Borders to raise awareness and funds to be able to carry out its struggle for freedom of information and the protection of journalists.

For every album sold, 9.90 euros will be donated directly to the fight for freedom of information. This sum will be used to:

- Organize the loan of bulletproof vests for journalists working in war zones,

- The distribution of 250 assistance grants each year, an average of 400 euros, for journalists who have been forced to flee their country,

- Organize online security workshops to teach journalists and citizen-journalists how to protect their information and communication online,

- Continue to seek, identify and report violations of press freedom and against journalists.

Funds raised on KissKissBankBank will go towards financing the technical and material production of the album. This will primarily be used for the publishing costs such as the edition, the layouts and the printing costs. In a second time, the money collected will be used for the distribution fees and the promotion of the album to the public.  We can assure you that we will make a good use of this money-raising thanks to you. Once we've reached our goal of 10,000€, the remaining money will be invested in poster campaigns and in actions to promote the album and obtain the most visibility possible.

Technical details about the album:

- 144 pages, on both recycled and gloss paper

Your name in the album (possible until July 22!) + previous rewards