A Million signatures to legalise cannabis in Europe 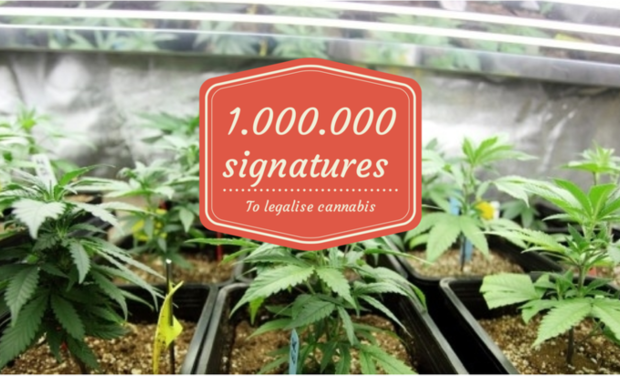 A Million signatures to legalise cannabis in Europe

Weed Like to Talk is a European Citizens' Initiative – a law proposal drafted by citizens – in order to legalise the use of cannabis in Europe.

We need your help to finance our campaign so as to collect one million signatures. We have already colleted more than 160 000 signatures but a campaign throughout several European countries is costly.

Despite cannabis prohibition in Europe, 77 million Europeans declare having already consumed cannabis during their lives. Among this number, 9 million young adults (15-34 years) declare having consumed cannabis during this past month. These citizens are reaching out to the only suppliers, the underground networks, and are thus sustaining a black market, with all the harmful consequences it has on the economy, human lives and more. Today, this market is entirely neglected by the public authorities.

Weed Like to Talk proposes to legalise the consumption, production, and selling of cannabis, and to start a global reflection on drugs in Europe.

Today, cannabis regulation is very heterogeneous throughout Europe. Some countries tolerate certain forms of possession or consumption, others have created amendments or administrative sanctions and others still apply penal sanctions. It is worth asking whether these mixed political approaches are really effective when it comes to social justice and public health.

The legalisation of cannabis is a very sensitive, polemic and controversial issue. It is a topic of many fears and prejudices, source to great divides in the public debate. So what is more democratic than debating and committing to make the choice that takes into consideration the opinion and daily life of the majority?

To support Weed Like to Talk is to show that another Europe is possible, a Europe that can make simple and daring political choices by listening to its citizens.

1. To guarantee an equal law for all and stop discrimination among European citizens

If 1 million European citizens to sign this campaign, the European Commission will have to review this law proposal and the European Parliament will be able to vote on it. Support and share this campaign for a real change on a tough issue!

This is an unprecedented chance to create a breakthrough in the European legislation on cannabis consumption.

Your support will allow us to finance this campaign in order to convey our message to a large audience.

Our communication is based on social networks, which allow us to reach out a huge number of supporters; you might be one of them. A lot of Europeans are unaware of our law proposal despite a total number of 160 000 signatories. We could do much better with your help!

In order to increase our reach, we will use sponsored publications on social networks, especially on Facebook where we can pay to reach a larger audience. We are able to advertise this message in order to raise awarness on our goal: changing cannabis legislation.

With 4000€, we could reach millions of Europeans through their social networks.

#1 Every extra euro in support of our campaign will allow us to reach about 500 Europeans.

#2 We have an unprecedented chance to change the law on the consumption cannabis consumption. Don't waste it, it might not happen again.

We have set a goal of 4000€ to be sure to collect at least this amount, but we would be glad to receive additional funding in order to increase our chances of success.