Help Bravehurt play for France in the Men’s Roller Derby World Cup the 14/15/16 March 2014 in Birmingham. 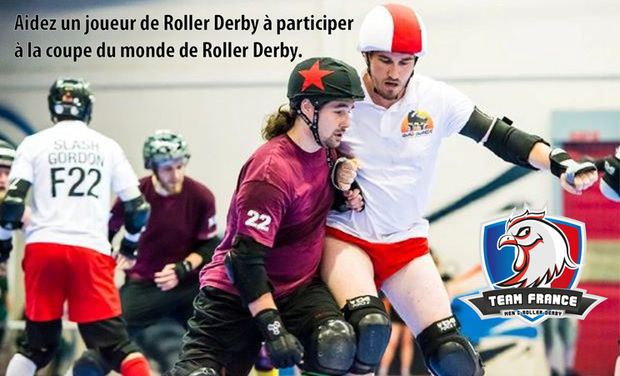 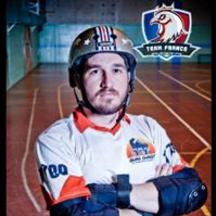 How much does he need? And what for?

Bravehurt is a player for Roller Derby Toulouse Quad Guards, a highly experienced roller derby referee and now, one of the 20 players selected to represent France in the Men’s Roller Derby World Cup.

Bravehurt is also the President and one of the founding members of Roller Derby Toulouse   This hugely successful French roller derby league has both women and men’s teams. Nothing Toulouse - the women’s A team - is the top ranked French team in the European Rankings, while the Quad Guards - the men’s team - are 2013 European champions, having been finalists in 2012 and losing by only 4 points.

But what IS Roller derby?

Roller derby is a full contact sport played on roller skates. A game of skill, strategy, strength and power. A game where skaters players score points by passing opponents, where they play offense and defence at the same time. A fast and furious athletic spectacle.  Check out this video for all the basics: http://wftda.com/resources/rollerderby101

Roller derby has been in France since 2010. This grassroots, volunteer run sport is still building its structure in France, but both the Men and Women of French Roller Derby have managed to build a selection to participate in international competitions. But where did it come from before that?

Roller derby was born in 1929 Chicago, in the midst of the Great Depression. A showman, Leo Seltzer, came up with the idea for a marathon endurance race, where teams of skaters would skate the distance around a track from Los Angeles / New York. In the end, skaters ended up travelling no less than 57,000 laps!

This race lasted for hours. At the end, when it got close, players began to hit and shove one another to win. Seltzer saw that the crown loved the brawls, so decided to create a sport where they were the point, rather than the endurance. It was an immediate success, with almost 20,000 spectators in the first week . That's when “the roller derby” first became a passion for American popular culture and clubs flourished throughout North America.

After huge success in stadiums and on TV, roller derby began to lose its prominence in the 70s and 80s. It became like WWF wrestling, where the “entertainment” aspect of the “sports entertainment” overwhelmed the sport and there was widespread cheating and bout fixing.

Relaunched in 2000 in Texas, by some third-wave feminist punks, contemporary roller derby is now an international sport with thousands of women’s teams around the world - USA, Australia, Belgium, Canada , Germany, Ireland, the Netherlands, New Zealand , Switzerland , Sweden, the UK and of course in France. Nothing Toulouse, the women’s roller derby team for Roller Derby Toulouse, is currently the top ranked French team in the European Roller Derby rankings.

There are also men's teams in Australia, England, USA and now in France. Most roller derby leagues follow the official rules established by the WFTDA (Women's Flat Track Derby Association) and adopted by their younger brothers the MRDA (Men's Roller Derby Association).

So, how much does he need, and what for?

(Bravehurt has slept on benches for international competitions before, and physically, it’s tough to play at your best like that:-( )

Ideally, he would like to skate on some new kit - his skates. pads and helmet are 3 old and has seen better days.

SHOUT OUT Bravehurt will print a sweatshirt with the names of each contributor and wear it during warm-ups and between bouts, with a message of thanks !

BOUT DAAAAAY! Your name on a sweatshirt, and a signed player card through the post (hearts and kisses included)

TEAM FRANCE POWERJAM Your name on a sweatshirt, and a signed player card through the post (hearts and kisses included) a signed pair of Bravehurt’s Quad Guard skating shorts (the famous red shorts! ) in size XL. AND Bravehurt will ask all of his teammates in Team France to sign his shirt and send it to you.

TEAM FRANCE SUPERJAM! Your name on a sweatshirt, and a signed player card through the post (hearts and kisses included) a signed pair of Bravehurt’s Quad Guard skating shorts (the famous red shorts!) in size XL; Bravehurt will ask all of his teammates in Team France to sign his shirt and send it to you. AND Bravehurt’s WORLD CUP competition red shorts, signe, size XL (available clean or dirty, up to you!)

SEE YOU BABY, SHAKING THOSE SHORTS : Your name on a sweatshirt, and a signed player card through the post (hearts and kisses included) AND a signed pair of Bravehurt’s Quad Guard skating shorts (the famous red shorts!) in size XL.